Share All sharing options for: Most Important Player Rankings: No. 6, RB Treyvon Green

Today, we move on to No. 6: RB Treyvon Green 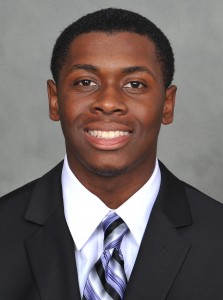 Treyvon Green will be one of NU's featured running backs in 2012 after running on steep learning curve in 2011.

Northwestern hasn't had a problem getting rushing yards in recent years, thanks to a group of mobile quarterbacks, but it has had problem getting production out of the running back position. Kain Colter led the Wildcats in rushing last year and Dan Persa likely would have in 2010 had he been healthy all year. In fact, you have to go back to 2008 — Tyrell Sutton's final year — to find a season when most of the rushing production came from the running backs.

Last year's running back group was depleted early in the season when Mike Trumpy tore his ACL, leaving fifth-year senior Jacob Schmidt and true freshman Treyvon Green to lead the group. Green carried the ball 97 times for 362 yards in 2011 — 3.7 yards per carry — with his best game coming against Eastern Illinois, when he ran for 70 yards and one touchdown. Trumpy will be returning from injury, which should help the running back situation, but Green will once again be one of NU's featured backs and his role will increase.

Green was one of the most improved NU players this spring, running with a lot more confidence than he did as a true freshman, especially in his decision-making at the line of scrimmage. His biggest weakness last season, he said, was his speed and the point of attack, the latter of which was noticeably better in the spring.

"I think I have good feet, good vision. I think I need to be better at the point of attack, just my speed. I'm working on getting faster. My conditioning is getting better, also."

A good running game will be important for NU as Kain Colter looks to improve as a passer early in the season, and Green can take some pressure off the Cats' fairly inexperienced quarterback as he tries to develop that part of his game. Trumpy, while a good player, has been injured a few times during his career, so Green will have to be ready to shoulder the entire load if Trumpy gets hurt again.

Green clearly has potential, as evidenced by the coaches' confidence in playing him so much as a true freshman. If he builds on an impressive spring, he can add yet another strength to NU's dynamic offense.