Leading up to the upcoming football season, Inside Northwestern will give you a brief profile of each of Northwestern’s opponents. During the season, you can expect a more in-depth preview of each game, including key matchups and more specific player analysis. This is simply a refresher for eager fans looking ahead to the fall. Look for this feature every Thursday. This week, we look at Penn State. Click here for last week’s edition. 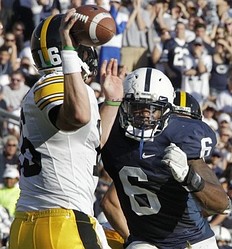 Any recent discussion of Penn State’s football program is invariably dominated by the Jerry Sandusky sexual molestation crisis and its massive rippling effects. The events that transpired in the wake of the November grand jury presentment that brought to light Sandusky’s sexual abuse and the Freeh Report’s revelation of a grand cover-up scheme executed by high-ranking university officials and former head coach Joe Paterno will forever tarnish the Nittany Lions and the idealistic “grand experiment”—the idea that football and athletics can coexist in a symbiotic, mutually beneficial way—the program has purported to exemplify for much of its existence. As more layers regarding Sandusky’s despicable acts and the roles his concealers played in facilitating them are unfolded, we at InsideNorthwestern will remember the victims and pay homage to those unduly punished by the crippling sanctions handed down by the NCAA on Monday. For the purpose of those interested in poring over an early summer preview of Northwestern’s opponents in the upcoming season, this post will concern Penn State’s 2012 football team and what NU fans can expect when their favorite team travels to Happy Valley to take on the Nittany Lions November 6. We recognize the gravity of the scandal and the severity of its implications, but we hope you can glance over this preview with a football-centric perspective, and at least for the moment focus not on Penn State’s institutional and administrative failures, but its football team and the challenges it presents for your beloved Wildcats.

It may be difficult to remember given everything that’s happened—Coach Paterno’s firing and death, the Sandusky Trial, the Freeh Report, the Paterno Statue’s removal the NCAA Sanctions—since the scandal surfaced last November, but Penn State was very much in play for a Big Ten title and a top-tier bowl game heading into the latter portion of league play. The Nittany Lions won eight of their first nine games, with eventual National champion Alabama inflicting their only defeat in a week 2 nonconference clash. After that loss, they reeled off seven straight victories, including a five-game streak against Big Ten competition. The Nittany Lions boasted a powerful run game, led by star tailback Silas Redd, and a fierce defensive front seven, with linebacker Gerald Hodges and tackle tandem Devon Still and Jordan Hill dominating the line of scrimmage.

Despite Redd’s consistent success, the offense was stagnant, plagued by maddeningly inconsistent quarterback play from Matt McGloin and Rob Bolden and a lack of talented receivers. But the Nittany Lions’ played to their strengths—grounding and pounding their opponents into submission, devouring  game clock, winning the turnover margin, hoping for 21-19-type wins—and it largely worked. Granted, the early league slate was forgiving, including the likes of Indiana, NU, Purdue and Illinois, and the Nittany Lions stormed through the soft part of their schedule and built considerable momentum heading into a tough three-game stretch in November.

The focus in State College quickly shifted away from a blue and white team with so much promise and potential, and in one fell swoop, all of their success and positive energy was quickly overshadowed by an outside force that set in motion one of the worst scandals in the history of intercollegiate athletics. The release of the grand jury presentment detailing accusations of Sandusky’s abuse and Paterno’s subsequent firing effectively crippled Penn State’s chances at capturing its first league title since 1993. Defensive coordinator Tom Bradley took over as interim head coach as the Nittany Lions dropped two of their final three conference games. Despite an impressive 9-3 record, bowl game officials were reluctant to accept Penn State. The program was passed up by several high-tier bowls, ultimately settling for the Ticket City Bowl, where it fell, 30-14, to Conference USA foe Houston.

*The following two sections were written with the baseline assumption that all players mentioned will not pursue immediate eligibility with another program under the sanction-based transfer rules recently imposed by NCAA president Mark Emmert before the start of the upcoming season.

Defensive gameplanning for Penn State should focus almost exclusively on stopping the run. If it doesn’t, whoever’s in charge of that week’s strategical preparation should consider resigning, or at least rethinking the viability of his job status long-term. The Nittany Lions, for better or worse, will operate much in the same way they did last season, with a heavy emphasis on the run game. McGloin has proven to be an inconsistent passer, while Redd remains the team’s most skillful offensive player. Despite O’Brien’s decorated history developing quarterbacks—he’s worked with New England Patriots quarterback Tom Brady over the past four years—fixing McGloin in one year’s time is a daunting endeavor. O’Brien would be better served implementing a run-heavy game plan to maximize his team’s offensive strengths. “Game manager” has become a cliché in the football lexicon, but McGloin would do well to abide strictly by its definition. The Nittany Lions will be forced to score points in spite of their quarterback, not because of him.

This type of gameplan stands in stark contrast to what O’Brien oversaw with the Patriots, where Brady has blossomed into one of the greatest quarterbacks of all time. The Patriots rarely run the ball, because they don’t need to. It makes sense. O’Brien, in keeping with that sound logic, should throw the ball only when absolutely necessary. Redd has an established track record of success and could make a star-sized leap given his anticipated workload. He was the focal point of the Nittany Lions’ offense last season and fared extremely well in the confines of former offensive coordinator Galen Hall’s offense. Redd wore down during the latter part of the season, but he should be recharged for the fall, looking to challenge Wisconsin’s Montee Ball and Michigan State’s Le’Veon Bell atop the Big Ten rushing ranks.

The offensive line, despite returning only one starter (center Matt Stankiewitch), made huge strides during spring practice and looked ready to facilitate an All-Big Ten worthy season from Redd. Wide receiver Devon Smith, one of Penn State’s leading receivers from last season, was dismissed from the team this spring, which gives O’Brien yet another reason to abstain from the passing game this fall. Balanced offenses are usually the best ones. For this Penn State team, that conventional wisdom lacks merit and the Nittany Lions would do well to devise as run-heavy an offense as possible, with just enough passing to keep opposing defenses honest. If they can establish the run with Redd—if the offensive line steps up, Redd should flourish—O’Brien can mix in a few pass plays on play action. An offense featuring heavy doses of run plays spliced with a few deep passes off play fakes should be an effective formula for the Nittany Lions in 2012.

Last season, the Nittany Lions physically dominated opponents—save Alabama and Wisconsin—with a fearsome front seven featuring Hodges, Hill and Still. Senior linebacker Michael Mauti, one of Penn State’s experienced leaders, tore his ACL just three games into the season, an injury that seemed capable of derailing its stout defense before league play. The Nittany Lions thrived without Mauti. In Big Ten play, they allowed an average of 16.8 points per game and repeatedly stifled some of the league’s most powerful offensive outfits.

With Penn State lacking firepower on offense, stingy defense was in high demand. It went part and parcel with their low-scoring, oft-ugly style of play. The Nittany Lions imposed a physical brand of football on their opponents, one emphasizing the run game and tenacious defense. The result was a bruising, old-school style, the complete antithesis of the in vogue spread offense fad pervading the Big Ten. If they can reestablish that same smashmouth gameplan, the defense will look a lot like last year’s stingy group. The offense, even with O’Brien at the helm, will not put up tons of points, meaning the defense has to play to the same level, if not better than last season. Despite losing Hill, the returning talent on this side of the ball provides the Nittany Lions with more than enough talent and experience to flummox opponents and contain the different flavors of spread offense existing within Big Ten playbooks.

Players like Hodges and Mauti, emboldened by the turmoil surrounding the program, will inspire their teammates to another stellar season. The Nittany Lions’ lights out linebacker tandem is no doubt instrumental to this year’s success. Not only are they arguably the defense’s most talented players, but also strong and vocal leaders that must incite and galvanize teammates on gameday despite the ultimate meaninglessness of their regular season performance. It’s a difficult task indeed, and the lingering effects of the NCAA sanctions will without doubt affect the Nittany Lions’ performance. But the defense, the heart and soul of the 2012 Nittany Lions, has to find ways to use their plight as a rallying cry for success, rather than an excuse for failure.