Share All sharing options for: Most Important Player Rankings: No. 5, CB Nick VanHoose

Today, we move on to No.5: CB Nick VanHoose 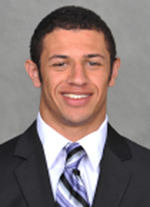 After an impressive spring performance, VanHoose is a likely candidate for a starting corner spot (Photo courtesy nusports.com)

Of all of Northwestern’s vulnerabilities heading into the upcoming season, none is more glaring than the pass defense. Sophomore safety Ibraheim Campbell is the lone returning starter from a unit that last season ranked last in the Big Ten in average pass yards allowed (230.4). And that was with Brian Peters and Jordan Mabin, two dynamic playmakers and leaders in the secondary who helped maintain some measure of confidence and unity within the group, even as it sputtered away leads in several key league games. This year, the secondary can be summed up best as follows: Campbell and everybody else.

One of the key newcomers is Nick VanHoose, a redshirt freshman whose standout performance in spring practice probably earned him a starting corner spot for the fall. Last year, he pulled his hamstring on the first day of preseason camp in Kenosha, Wisc., a devastating setback for a player with so much promise and potential. But for the injury, VanHoose likely would have played a key role, and Pat Fitzgerald considered inserting him into the starting lineup late in the season after Mabin suffered a season-ending injury against Michigan State. Instead Fitzgerald chose redshirt freshman Daniel Jones, who struggled mightily against the Spartans as well as Texas A & M in the Meineke Car Care Bowl. VanHoose, rather than begin his career against two of the nation’s most explosive offenses and risk reinjuring himself, preserved his four years of eligibility and is ready to contribute in a big way this season.

During spring practice he appeared stronger, faster and most importantly, healthier than last season. His rapid rise was tempered somewhat by a poor performance in the spring game, when he got caught on the wrong end of an acrobatic 44-yard touchdown catch by Cameron Dickerson. Still, for a secondary in desperate need of a youthful talent infusion, VanHoose’s emergence was just the sort of encouraging development it needed. Whether the speed, athleticism and tight coverage he flashed throughout spring practice translates to positive contributions this fall remains to be seen.

Opposing teams more likely than not will prepare pass-oriented offensive game plans for NU. Or at least that’s the most logical course of action, considering the lack of depth and inexperience in the secondary. VanHoose, for all his recent improvements, still stands to receive the brunt of the anticipated aerial assaults this fall. After all, he’s a redshirt freshman with no game experience to speak of. It only makes sense that QBs would throw the ball his way as much as possible, if only for the purpose of attacking the perceived weakest point of an altogether weak pass defense. VanHoose must meet this challenge head on, undaunted by the pinpoint spirals and lighting quick receivers running his way. This is a huge challenge for a redshirt freshman who has yet to play a down of big-time college football. If he succeeds, morphing a point of weakness, cornerback, into a strength, all the better for NU and its pass defense woes. If he fails, the secondary will struggle perhaps even more than last season’s shaky bunch.