Share All sharing options for: Most Important Player Rankings: No. 4, DT Chance Carter

Today, we move on to No. 4: DT Chance Carter 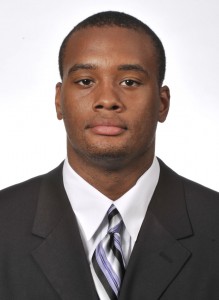 Chance Carter should play a major role on the defensive line in his first year as a starter.

After a disappointing season in 2011, the inside of the defensive line will be receiving a makeover in 2012, but perhaps for the better. Senior Brian Arnfelt and sophomore Chance Carter are the likely candidates to start at defensive tackle, replacing Niko Mafuli and Jack DiNardo. While having two new starters is typically bad news for teams, it may be a blessing for this NU front, which should be much more talented than last year.

Arnfelt has some starting experience and should be solid, but Carter is the X-factor and could surprise in the Big Ten this season. Carter played sparingly in 2011 after redshirting in 2010, but he was a force in spring ball, gathering praise from the coaches and his fellow teammates. During the spring game he had a "17-point play" on an interception return for a touchdown — NU awarded 12 points for the touchdown and five for the interception — that garnered some attention, but he was also good at getting to the quarterback, something the Wildcats have stressed all season long.

At 6-3, 270, Carter isn't a big defensive tackle, but he's very quick, which gives him the ability to make plays in the backfield. Like a defensive end, he can force quarterbacks into mistakes and he can be a challenge to contain for opposing offensive linemen. He can help NU's ends in getting to the quarterback, as well as help out in the run-stuffing game, and that versatility could make him a candidate for All-Big Ten honors.

NU has a lot of depth at defensive end, but the depth at defensive tackle is slim, meaning Carter will be called upon to play a major role in his first season as a starter and staying injury-free will be essential. He clearly has potential, as evidenced by spring practice, and if he builds on that performance, he can give NU a versatile presence on the defensive front, which would be a much-needed improvement from last season.