Share All sharing options for: Offensive Line Expecting no drop-off without Burkett, Netter. 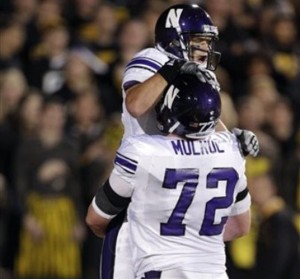 When Al Netter and Ben Burkett graduated this spring, Northwestern faced an uncertain future without two players who over the past four seasons accumulated a combined 104 starts while developing into strong and vocal leaders. Netter, a 2011 preseason Outland Trophy candidate, had proven himself as one of the league’s best left tackles and Burkett established a similar reputation as a gritty interior lineman. Their combined losses leaves the line without its two main stabilizing forces, so a drop-off in production this season wouldn’t surprise anyone. But make no mistake: this year’s group feels it can be just as good, if not better than last season.

“I’m really excited about what we have,” said senior left guard Brian Mulroe, a third-year starter. “With all the young guys and the old guys gelling together, I don’t expect there to be any fall off. I’m not worried about losing those two guys.”

It wouldn’t make much sense for Mulroe to concede that this year’s line is worse off without Netter and Burkett. Mulroe will play a huge role in filling the leadership gap left behind, and it’s in large part his responsibility to assure there’s no drop off. It may seem unlikely, outright impossible, even, that the line will seamlessly transition into next season after being gutted of two senior leaders. But this group, a diverse medley of new faces and sparsely-used veterans, has the talent and experience to maintain the continuity built under Burkett and Mulroe.

One of the main reasons why Mulroe’s appraisal may prove prescient is center Brandon Vitabile, who returns after a redshirt freshman campaign in which he started every game and developed into an indispensable force at center. Vitabile embraced a huge responsibility calling plays at the line of scrimmage and working with his teammates to develop greater fluidity and cohesion along the line. He was named to the preseason watch list for the Rimington Award, given annually to the nation’s best center, and is poised for an even larger leadership role this season.

At left tackle, Patrick Ward will wholeheartedly embrace the daunting task of filling in for Netter. Ward, an athletic and versatile lineman who boasts great size for his position at 6-7, 310 pounds, started on the right side last season, and understands the challenges of the position. While left tackle is a more demanding position, Ward is experienced, skilled and versatile enough to fill in valiantly. Mulroe expects the same consistent production he’s seen over the past few years with Netter to continue this season.

“Patrick has really stepped up this spring,” Mulroe said. “Al was a great player, but I think Patrick is ready.”

The right side of the line, unlike the left, carries several question marks into camp. Both positions, guard and tackle, remain unresolved, which increases the importance of preseason camp, where several players will battle for depth chart supremacy. Neal Deiters, a behemoth, 6-8, 315 pound guard, will challenge Jack Konopka, a converted superback, for starting duty at right guard. While Konopka has the slight edge heading into camp—he has decided advantages with speed, strength and athleticism—Dieters is the more experienced player and may win the job before it’s all said and done. Redshirt freshman Geoff Mogus and Matt Frazier could compete with Dieters and Konopka for playing time.

Tackle is an even larger mystery, with redshirt fresman Shane Mertz and sophomore Paul Jorgensen each posing strong challenges for the top spot. Both players have bright futures, and Jorgensen made huge strides during spring practice. Mertz, affectionately known as the S.S. Mertz for his 6-8, 300 pound frame, is the more physically imposing player, and while he’s yet to earn any game experience, the package he brings—a towering presence with great quickness and athleticism, one of the best skills to size players on NU’s roster—could prove far too enticing for Fitzgerald and his staff to pass on, even at this early stage in his development. Senior Chuck Porcelli, who makes up for his lack of athleticism with experience, savvy and a great work ethic, has a viable claim to the position, too.

“We have a lot of young guys who are definitely ready to step up this year,” Mulroe said. “I’m confident in those guys stepping up and gelling with the older guys. We’re going to be strong this season. It’s going to be interesting to see what happens in camp. Competition brings you closer, makes you like a tight knit brotherhood”

There’s also a handful of incoming players that will hunt for playing time within a deep O-line rotation. Four-star recruit (according to Scout. Com) Adam DePietro along with three-stars Kenton Playko and Ian Park form a talented and versatile freshman class, intriguing prospects with an abundance of promise and upside. These high-ceiling players may not realize their full potential on the field this season—perhaps a redshirt year is the preferable route—but it won’t be long before they surface as mainstays in the rotation. They haven’t played in a single game or any official team practices, yet Mulroe is already impressed with their progress.

“The freshmen are awesome guys,” Mulroe said. “You look at guys like Ian Park, DePietro, Playko—these guys can really play. Some of them just need to add a few pounds, and they’ll be ready to go.”

Talent and depth won’t be a major concern heading into this season. From fifth-year seniors (Porcelli) to true freshmen (DePietro), the roster is filled with players capable of playing a meaningful number of snaps this season. The more pressing issue is replacing the crater-sized leadership  hole created in the wake of Burkett’s and Netter’s departure.

“I feel like we all can be leaders this season,” Mulroe said. “we all need to step up.”

The Glenview, Ill, native diffused the responsibility. But in order to stabilize this year's line, Mulroe may have to shoulder a larger responsibility than he’s willing to admit . The O-Line appears set to follow the positive trajectory built over the past few years under its departed leaders. Now Mulroe must take the reins and continue leading the group down a path of success—guiding, developing, and grooming the young talent while harboring a positive and productive team dynamic, both on and off the field. No Netter. No Burkett. No problem.