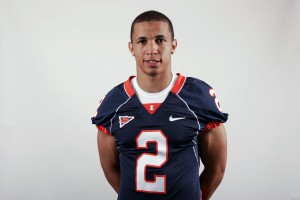 Illinois quarterback Nathan Scheelhaase has watched the rivalry with Northwestern grow since he arrived on campus in Champaign.

When new Illinois coach Tim Beckman took the podium at Big Ten Media Days on Thursday, he took a page from the book of Ohio State coach Urban Meyer, referring to his rival as “that team upstate.”

Of course, Beckman was talking about Northwestern. And while NU-Illinois playing for the Land of Lincoln Trophy certainly isn’t the caliber of Ohio State playing Michigan — Meyer’s “team up North” — in “The Game,” it’s a rivalry that Beckman hopes to help grow.

“I walked in here and said, shoot, our rivalry is going to be with that team upstate.”

It’s hard to manufacture rivalries — typically they’re formed over time — but since the NU-Illinois game has everything rivalries are usually made of — they’re in-state foes, recruit the same area and play in the same conference — there’s room for a rivalry to build. And that build-up has already started, even before Beckman arrived.

“It’s something I didn’t really know about when I first came here, but really I think when we played in Wrigley (in 2010), that was something that kind of amped up the intensity a little more,” Illini quarterback Nathan Scheelhaase said.

In addition to being one of the most nationally relevant NU-Illinois games in a long time and being played at a neutral site, the Wrigley game was most significant for the battleground: Chicago.

NU may have inadvertently started the rivalry by launching a marketing campaign as “Chicago’s Big Ten Team” a few years back, claiming to be the cities home team and launching a billboard campaign, as well.

Illinois took offense to the notion that NU held the Chicago market, even posting a message on its scoreboard that read “The State of Illinois’ Undefeated Big Ten Team” after a win against the Wildcats in 2011. However, it started with the Wrigley game in 2010.

“Before they had talked about being Chicago’s Big Ten team and a lot of our players live up here in Chicago, saw the billboards and all that, and that probably hyped it up a little bit more,” Scheelhaase said, “going up to Chicago a little bit more and knocking them off, kind of claiming the state and claiming the city.

“I think for the Chicago guys, they probably enjoy it more than everybody else because they have to drive around in the city and see the billboards and different stuff, and for them to be able to call themselves Illinois’ Big Ten Team and Chicago’s Big Ten Team, — which I think whenever you win that game you have the right to do for that year — I think it gives them bragging rights when they’re on their home turf, so that’s something that’s always pretty cool.”

Illinois defensive lineman Michael Buchanan said the rivalry has built in recent years, but for the Chicago area native, the Land of Lincoln game has always been a rivalry game.

“Whenever the Northwestern game is, we circle it on our calendar. That’s one game from Illinois, so we feel like we have to take care of it,” he said. “It’s one of our goals, beating Northwestern, taking care of our in state team. We have to show that we’re Chicago’s Big Ten team.”

This year, the series returns to Evanston on the Saturday after Thanksgiving. With bowl pecking order possibly on the line, in addition to the Land of Lincoln trophy and usual bragging rights, the rivalry could build even more.

“It’s the last game in the season and it’ll be even more interesting,” Scheelhaase said.