Share All sharing options for: Shurna signs summer league contract with Atlanta Hawks: What to expect from NU's all time leading scorer 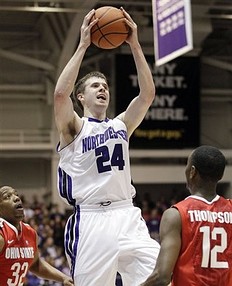 The 2012 Summer League consists of 24 teams competing in a 60-game schedule July 13-22, with each team playing five games. Atlanta kicks off the summer league slate on July 13 against Washington and will play all five of its games at the Cox Pavilion, home of the UNLV Lady Rebels women’s basketball team.

It’s hard to tell whether Atlanta is a good fit for Shurna and his unique skill set. The Hawks are in the midst of a massive salary-slashing campaign, having just dealt 6x All-Star Joe Johnson and the remaining 4 years/$90 million on his salary to the Brooklyn Nets as well as small forward Marvin Williams to the Utah Jazz. The strategy works if Atlanta can land a big-time free agent or two next summer, when Clippers point guard Chris Paul and Orlando Magic Center Dwight Howard might be available. Failing that, the Hawks will have acres of cap space and a depleted roster. It’s a considerable risk, but one worth taking all the same.

Having a knock-down three-point shooter like Shurna surely would benefit any NBA team. Problem is, Atlanta just picked up one of the league’s most lethal three point shooters in Anthony Morrow, one of the expiring contracts acquired in the Joe Johnson trade. Morrow’s contract expires after the 2012-2013 season, which leaves open the possibility of Shurna joining the team for the 2013-2014 season. Obviously, keeping more than two long-range shooting specialists on your roster is hardly a move that will blight Atlanta’s roster, not to mention the Hawks’ lack of incentive to go all-in on a playoff run next season. In essence, Ferry and Hawks coach Larry Drew will use the next season to gauge which players merit roster spots beyond summer 2013, when the anticipated free agent splurge will take place and their chances of contending in a top-heavy Eastern conference should, if all goes according to plan, increase greatly.

Which means Shurna, if he outshines summer league competition, has as good a shot as any (pun intended) to catch on with the Hawks, who no doubt will covet a sharp-shooting forward to complement their free agent acquisitions next summer. Then again, that’s a huge if, and Shurna will need to prove in these four critical games not only that he’s better than the early twenty somethings he’s competing against but that he’s effective enough to merit a call-up with some of the most explosive, immensely talented all-around athletes the world has to offer.

It’s worth remembering that Shurna’s options aren’t limited to one team—any squad desiring his services has the green light to sign him, assuming Atlanta has no intention to do so. Still, making an NBA roster as an undrafted player through summer league play is a tall order, and as I wrote last week after the draft, his summer league teammates have one thing, and one thing only, on their minds in these ultra-competitive showcase games: themselves. Shurna needs to assert himself, demand the ball and dictate the game by his own terms. It may require creating his own shot off the dribble, since summer league teammates, many of them stuck in the same boat as Shurna, will be loath to hit Shurna for open threes on the perimeter. Shurna’s only viable claim to an NBA roster spot is three-point shooting, so it is an absolute must in these four games that he launch as many 23-footers as possible with the hope that the pixie dust from his virtuoso 36/40 three-point shooting performance lasts forever more.

Shurna’s summer league games are must-see viewing for NU basketball fans, and NBA TV knows as much, which is why the network plans to air all 60 games starting Friday, July 13 with Atlanta’s summer league opener against Washington (1 pm pacific).