Share All sharing options for: Most Important Player Rankings: No. 3, C Brandon Vitabile

Today, we move on to No. 3: C Brandon Vitabile 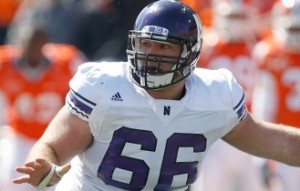 Heading into training camp last season, Ben Burkett winning and securing the starting center spot was practically a fait accompli. Burkett, a three-year starter, had been named to the Rimington Award preseason watch list, meaning he received national recognition as one of the nation’s best centers. Turns out, Burkett wasn’t even the best center on his own team. Redshirt freshman Brandon Vitabile earned that honor in preseason camp. His emergence prompted Burkett’s switch to right guard, and the line was better off as a result.

Once the season began, Vitabile proved Fitzgerald and staff made the correct decision by inserting him into the starting lineup. He took on every challenge—calling plays at the line of scrimmage, perfecting a fluid snap-release motion with two quarterbacks, blocking mammoth defensive tackles like Penn State’s Devon Still—with poise and tranquility that belied his game inexperience. By season’s end, Vitabile had evolved into the line’s most indispensable and arguably its best player.

This season, it was Vitabile gaining national acclaim for his on-field success, as he, too, was named a preseason Rimington candidate. Unlike Burkett, though, Vitabile isn’t about to lose his starting job. In fact, you can make the case that he is the offense’s most important player this season. That’s a lot to swallow, but it requires no large stretch of the imagination. The Wildcats lost Burkett and Al Netter, two four-year starters that provided leadership, to graduation this spring, a potentially crippling loss given their vital importance over the past four seasons (my take on why it’s not). There are players returning, guys like Brian Mulroe and Patrick Ward, but Vitabile is now unquestionably the best of the bunch, and his nomination to the Rimington list confirmed as much. He also plays the most important position, or at least the most demanding. And with Burkett and Netter no longer around for help along the way, Vitabile must embrace the same challenges that their guidance and oversight helped him overcome last season.

For Vitabile, Last year was about setting the foundation, about learning the basic building blocks and baseline requirements of his position. Now he needs to elevate his game to a new level—All-conference recognition, perhaps?—while gelling the disparate parts around him into a cohesive and fortified unit. If the pieces fit, and if Vitabile lives up to his considerable hype, the line will exceed last year’s group in every quantifiable and observable way. If not, and Vitabile shows he still needs developmental time, Kain Colter will find himself under pressure and in unfavorable positions more often than he might like.

What Vitabile accomplished in 13 games last season was truly remarkable. His performance was rather unexpected, an added bonus for an offensive line that had the depth and experience to carry on without him. That’s not the case this season, now that Vitabile must guide and direct those around him while commanding a level of respect typically reserved for older players. He is without doubt the centerpiece, both literally and figuratively, of NU’s pass protection and run blocking efforts this season. A trainee turned commander in just one season’s time, Vitabile simply can’t regress this season.