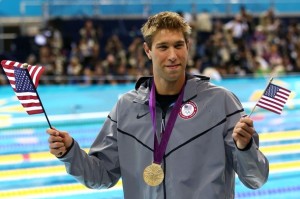 Shortly after 3:00 pm eastern time, Matt Grevers took one huge step atop the Olympic podium to celebrate his Gold Medal and Olympic world record in the 100 M backstroke. Grevers, a 2007 graduate, eclipsed the time (52.54) posted by Aaron Peirsol at the 2008 Beijing Olympics with his 52.16. Finishing second was fellow American Nick Thoman, with a time of 52.92.

Four years ago, Grevers took silver in the same race, finishing behind Piersol, and also participated in two gold-winning relay teams. He claimed his first individual gold with Monday’s triumph. Grevers can capture his second gold medal of these games in the 400-medley relay, which stages preliminary heats Friday, Aug. 3.

Here is the full video replay of the race.

Not only is Grevers’ feat impressive on its own merits, it marks an impressive milestone for Wildcats athletics, not to mention a great talking point for NU alums in any Olympic-related discussion. It’s great to see a former Wildcat permanently etch his name into the Olympic record. His feat may go a bit overlooked, considering its back-to-back proximity with 17-year-old wunderkind Missy Franklin’s gold medal triumph in the same event. Still, in capturing Olympic gold, Grevers represented Purple pride in the most noble of ways on the grandest, brightest, heavily-eyeballed stage possible. More importantly, he claimed singular possession of perhaps the greatest individual honor in athletic competition, cementing his legacy in Olympic lore.

What makes Grevers’ win all the more special is that it came on the heels of an all-around disappointing day in the USA men’s swimming world, a day that saw the 400 IM relay team lose in devastatingly dramatic fashion to France. While this was hardly a must-win for the Red White and Blue, it represents positive momentum nonetheless and we may look back and pinpoint Grevers’ triumph as a turning point for USA men’s swimming in these games.