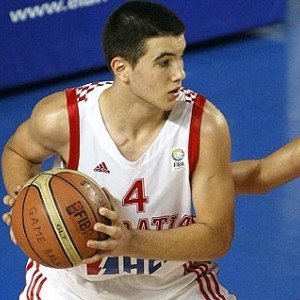 After committing to Northwestern in May, Brzoja was denied admission. He found refuge in Villanova (PA) over the weekend (Photo courtesy Scout. com).

Since their season ended last March on a sour note with another failed NCAA Tournament bid, Northwestern has enjoyed a major uptick in positive programmatic momentum. Jared Swopshire, a 6-8 forward who played sparingly in Louisville’s 2012 Final Four run, announced in May that he would play out his fifth and final year of eligibility with the Wildcats. NU added another big man soon thereafter in 7-2 Sudanese giant Chier Ajou (The NCAA clearinghouse is still sifting through Ajou’s academic records and proceeding with caution in its thorough background checks before granting him the green light in 2012).

Those additions bolster the Wildcats’ prospects in 2012. NU painted a brighter long-term trajectory, too, with the addition nearly a month ago of Jaren Sina, the No. 13-ranked point guard in the class of 2013 and the No. 75-ranked player overall. Sina is arguably the most decorated recruit in the Wildcats mostly futile prospect-hunting history. Sina’s verbal wasn’t just about what he brings to NU from a basketball standpoint—great floor leadership, savvy ballhandling, deft passing, a silky long-range stroke—it was about the positive rippling effects on the recruiting trail. Or at least that was the logical presumption when Nate Taphorn, a three-star spot-up shooter in the John Shurna mold, committed soon after.

So the Wildcats will enter the upcoming season feeling rightfully optimistic about their prospects of breaking the Tournament threshold this season. Only they could be holding their heads a bit higher, if not for the denied admission earlier this summer of touted three-star guard Mislav Brzoja, who over the weekend committed to Villanova.

It’s been a long and frustrating road for Brzoja. The 6-foot-5 Croatian combo guard verbally committed to the Wildcats in May and seemed pretty convinced on his choice. “I think that Northwestern would be a good fit for me,” Brzoja told PurpleWildcats. Com after his commitment. “Their style of play is good for me. I want to play in the Big Ten.” The school had yet to go through his test scores and transcripts, so his eventual admission was at best likely and, at worst, tenuous. Despite posting poor test scores and a sub-par GPA in his native Croatia, Brzoja submitted a perfect 4.0 while attending Traders Point Christian Academy in Whitestown, IN. Even for NU—home to some of the most challenging admission standards in the power conference college hoops landscape—you would expect a 4.0 to seal the deal on most every athlete admissions verdict. The length and breadth of deliberations implied otherwise, and those fears were confirmed in June, when Brzoja’s academic profile was rejected.

The decision robbed the Wildcats of a potential big-impact player in 2012, and it provided more ammunition for Wildcat fans who have long cried aghast at NU’s stringent admission standards for prospective recruits. Brzoja is the type of high-upside, ultra-skilled off-guard capable of starring in Carmody’s Princeton system. At the very least, he would have provided solid minutes in a thin guard rotation. For the first time in recent memory, it seems NU’s offense will rely heavily on low-block scoring, rather than the three-point-heavy,perimeter-oriented system of year’s past. This makes sense. The Wildcats, thanks to a host of transfers and incoming players, have the big bodies to bang around on the low block, but are lacking in dynamic backcourt playmakers, which is what Brzoja purported to function as in the Princeton. The news was received poorly by Wildcat fans, but it put Brzoja in extremely dangerous territory. Strongly convinced NU would accept his academic transcripts and test scores, Brzoja didn’t prepare a viable back-up plan. So by the time NU reached a negative consensus, Dayton, Brzoja’s second option, had maxed out its 2012 scholarship allotment, meaning Brzoja was left scrambling for another school to take him in.

After months of uncertainty, Brzoja finally found a new home. The Wildcats (not to be confused with NU) received scholarship flexibility this spring when Maalik Waayns Dominic Cheek announced declared for the NBA draft and Markus Kennedy transferred to SMU, paving the way for Brzoja’s arrival.With the losses of three players expected to contribute substantial minutes and a large portion of the scoring load, Brzoja may get the opportunity to step in right away alongside highly-touted incoming point guard Ryan Arcidiacono. Villanova was not Brzoja’s first choice, but it’s a pretty favorable consolation prize considering the dire situation he faced after NU unexpectedly crushed his dreams of playing the wide-open, free-flowing brand of basketball he envisioned under Carmody when he committed months ago. While Villanova took a step back last season, this is still a top-tier Big East program guided by one of the nation’s best (and most exquisitely-dressed) coaches in Jay Wright. It won’t be long before the Wildcats return to familiar NCAA Tournament territory, and if Brzoja arrives ready to contribute, he could help them get there as early as this season.

For NU, this is inarguably one of the more frustrating recruitment sagas in recent memory—to have one of the most heralded recruits in program history announce his commitment, present a respectable academic portfolio, then get shot down in admissions is downright disheartening. For years NU fans have lamented the limited talent pool from which coaches focus their recruiting efforts. Their frustration is no doubt legitimate. The Wildcats compete against big time teams with big time talent in a big time conference. Staying competitive within the confines of that inherently challenging power structure is difficult when the players from which you base your recruiting efforts is on the whole smaller and less talented than your opponents’. The Wildcats simply haven’t been able to pull in the same type of player as, say, Ohio State or Michigan State. Of course, academics aren’t the only reason for this—NU’s lackluster facilities, tepid fan base and unceremonious college hoops history are obvious disincentives for any top-tier recruit. Still, the fact remains: when it comes to four and five-star talent, NU’s academic standards generally hurt more than help its chances at luring them to Evanston.

So when Brzoja—not a top-100 player, but a highly-talented player nonetheless and a step-up from the typical NU hoops recruit standard—chose NU over Marquette, Vanderbilt, LSU and other Big Six programs, Wildcats fans were understandably stoked. After all, it’s not every day that NU emerges favorably in recruiting bidding wars against established brand-name programs. That initial excitement factor—the expectation that the once-averse eyes of highly-sought after prospects were changing their minds about NU’s traditionally fruitless recruiting pitch—only served to magnify the overall disappointment factor when word leaked about his turndown in admissions. Brzoja’s commitment represented hope for a brighter and more talented recruiting future; the admissions department extinguished those hopes by slamming down its authoritative academic fist. The most confusing part about the decision was Brzoja’s outwardly sterling GPA, which, it would seem, should have provided a forceful enough push to get him over any conceivable academic hurdle. Admissions never provided a specific reason for his rejection, or at least it hasn’t been made public. But given the circumstances—Brzoja was one of the most talented players ever to choose NU, a momentous pickup for Carmody after his job security came under heavy scrutiny this offseason— it’s fair to ask whether admissions unearthed some dubious content within his academic track record. Now that he’s landed at Villanova, which has long maintained a demanding academic curriculum, his rejection at NU is even more puzzling.

Whatever the case, it’s refreshing to see his last-minute scrambling efforts result favorably with a spot on Villanova’s 2012 roster. For weeks it appeared as if Brzoja might have to enroll in a post-graduate year, then re-enter the same recruiting market that made his college choice a stressful and enduring process in the first place. At this point, the post-Brzoja decision hate parade has cooled off, and NU hoops fans are gearing up for the fall without too much concern that he won’t suit up for the Wildcats (the purple variant) in 2012.

The offseason provided reason for excitement, not just in 2012, but for the long term prospects of NU basketball. Even with Shurna—perhaps the best player in school history—graduating this spring, the new faces, provided they can gel around last year’s core, might get NU into the 68-team bracket it has long dreamed of reaching. Brzoja would have brought increased excitement for the Wildcats’ Tournament hopes in 2012. Unsettling as it may be, his unique talents will be used on another team, in another system, for a different species of “Wildcats”, half-way across the country.