Share All sharing options for: Kyle Prater Receives NCAA Eligibility Waiver: What it Means for Northwestern 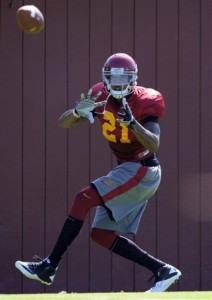 USC transfer Kyle Prater received an NCAA waiver to allow him to play immediately at NU.

At long last, the NCAA has released its verdict on USC transfer Kyle Prater, and it’s inarguably a positive one for the Wildcats. Prater, after leaving USC for NU earlier this year, had been waiting for the NCAA to rule on his transfer hardship waiver. The decision means Prater will have three seasons of remaining eligibility beginning in the fall.

Here’s what coach Pat Fitzgerald had to say about the news (per the school’s official release):

"Kyle has worked extremely hard since coming to Northwestern to prepare himself for this season and it's great that he will be rewarded for that effort," said Wildcats Head Coach Pat Fitzgerald. "We're happy to see him return to the football field and get the chance to play in front of his friends and family here in Chicago.

"Several members of our athletic department staff also deserve a great deal of credit for facilitating Kyle's eligibility for this season, including athletic director Jim Phillips, director of football operations Cody Cedja and Maureen Harty and Aaron Hosmon in compliance," Fitzgerald said. "This was a team effort and we appreciate all that they do for our football program."

One of the top-ranked wide receiver recruits coming out of Proviso West (IL) high school in 2009, Prater redshirted in 2010 and battled injuries in 2011, recording just one reception for six yards. He was buried on the Trojans' receiver depth chart after recovering from his injury. Prater was recruited to USC by longtime coach Pete Carroll, who now holds the same position with the Seattle Seahawks. Lane Kiffin replaced Carroll in January 2010.

After a tumultuous two years that included a lot more football watching than football playing, Kyle Prater will be on the field once again when Northwestern travels to Syracuse on September 1. The NCAA approved Prater's request for a waiver to play immediately after transferring to NU from USC. Prater, a former star at Proviso West High School near Chicago, cited family reasons and wanting to be closer to home as his reason for transfer.

First off, this decision from the NCAA is no surprise. The rule is in place to keep players from transferring to contenders all the time — for instance, if the transfer had been from NU to USC, Prater would have been much less likely to get the waiver. But since Prater is leaving a likely national championship contender (USC) for a school that isn't widely considered a contender for even a conference title (NU), this decision seemed likely from the beginning. And while the length of time it took for a ruling to be announced was puzzling, NU fans had reason for optimism with the approved waiver requests from DeAnthony Arnett (Tennessee to Michigan State) and Amir Carlisle (USC to Notre Dame).

So now that the off-field distractions are over, it's time to figure out what this really means for NU on the field, as Prater gets set to finish his final three years of college football in Evanston.

Obviously, Prater's talent is off the charts. He's the highest-rated recruit NU has gotten in years, coming out of high school as a five-star recruit and the No. 2 WR in the country. At 6-5, 215 pounds, he has a massive frame and is able to go up to get passes most receivers can't get. Simply put, he's ultra-talented and has a tremendous upside, with the capability to be an All-American in the next three years. The question is whether he'll reach that potential after a rough collegiate start and how he'll fit in with the Wildcats' offense this season.

Any other year, Prater's arrival could potentially make or break NU's passing offense for that season. However, this team is so stacked at receiver, that all this does is solidify the Cats' receiving corps as the best in the Big Ten, when it was already one of the best in the conference, even without Prater. Sophomore Christian Jones will be expected to lead the group, along with senior Demetrius Fields, but there are a number of other players in this deep unit that can step up. Tony Jones has a chance to have a breakout year — he had a solid freshman campaign, but was shirt all of last season — and Rashad Lawrence be productive. Some young guys — particularly Cameron Dickerson, Pierre Youngblood-Ary and Cermak Bland — could see the field as well.

With so much depth, having Prater wasn't a must. And while he may be Kain Colter's No. 1 target next year, Prater likely won't have the same production as other No. 1 receivers in the Big Ten because NU will spread the ball around much more than most teams. There are bound to be some NU fans who expect video game-type stats, and those fans will likely be disappointed. In addition to having to share catches, Prater is likely to have some rust after essentially taking two years off of game day experience and he needs to adjust to a new playbook.

However, while the numbers may not be flashy, this will be a big pickup for NU. The Cats have a number of solid receivers, but Prater has the most star potential and gives the offense a sure-fire No. 1 threat. That's important for situations in crunch time, and from the little we've seen so far, Prater certainly has big play potential. He didn't get a lot of receptions in spring ball, but mad a few eye-opening catches, out-jumping defenders for tough, one-handed catches. It will be extremely valuable in helping the progression of new(ish) quarterback Kain Colter if Prater can go up and get those jump balls, making plays that most receivers wouldn't be able to make.

It's too early to know which Prater we'll see — will he live up to the potential he showed coming out how high school? But what we do know is that NU has one of the most talented receivers in the Big Ten of 2012 and a player with a tremendous upside. If everything works out, that should translate into good things for an already explosive offense.