Share All sharing options for: Most Important Player Rankings: No. 2, S Ibraheim Campbell

Today, we move on to No. 2: S Ibraheim Campbell 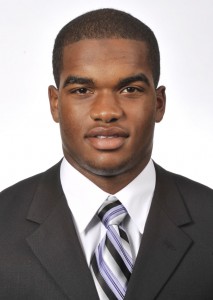 After an up-and-down redshirt freshman campaign, safety Ibraheim Campbell will be called upon to take on a veteran role in NU's secondary.

As good as Northwestern's offense will be in 2012, the hopes of the team will rely on the defense this season, and for NU fans who watched that unit last season, that can't be good news. However, the linebacker corps is solid and the defensive line, which has a lot of young talent, was dominant during the spring. Like last year, questions remain about the secondary, which will make or break the season.

It's hard to believe that, as bad as NU's secondary was in 2011, the outlook is even shakier this season. The Wildcats lose veterans Brian Peters, Jordan Mabin and Jeravin Matthews, leaving Ibraheim Campbell — a sophomore — as the lone returning starter. It's tough to figure out who will start in the remaining secondary spots — we break it down here — but our best guesses are redshirt freshman Nick VanHoose, sophomore Davion Fleming and fifth-year senior Quinn Evans. Evans, a transfer from Stanford, is the only other player with a decent amount of playing experience. That means Campbell, with just one year of starting experience, will be the leader of the unit.

It's hard to believe Campbell is already a "veteran" considering his play early last year. He started off by making a lot of freshman mistakes and looked lost at times early on. While he certainly showed potential, he also endured some of the rough patches that his teammates — particularly VanHoose and Fleming — are likely to have this year. Campbell's job will be to to communicate with the younger players — last year's veterans didn't do enough of that — and make sure they're in the right place at the right time. If he doesn't, the breakdowns from last year will continue.

While Campbell did suffer through a steep learning curve, it was evident that he is extremely talented, which is why he saw the field early in his career. He had two interceptions and a fumble recovery to go along with 100 tackles last season. He may have been the most talented player in the secondary last season, even if not the most consistent. Now, consistency is the next step.

First off, Campbell must be able to stay on the field and avoid injuries — four relatively inexperienced players in the secondary would be a disaster. Assuming he does stay healthy, he has to assume the leadership role that Peters left at safety. The communication in the secondary needs to be better, as echoed by every player and coach on the team, and that responsibility falls on Campbell. We already know he has the talent, but acting like a seasoned veteran on the field is the most important aspect of his game next season. If he does, NU can surprise on defense. If not, we could see a repeat of the struggles the secondary had last season.