Leading up to the upcoming football season, Inside Northwestern will give you a brief profile of each of Northwestern’s opponents. During the season, you can expect a more in-depth preview of each game, including key matchups and more specific player analysis. This is simply a refresher for eager fans looking ahead to the fall. Look for this feature every Thursday. This week, we look at Boston College. Click here  for last week’s edition. 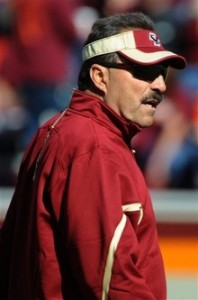 The Eagles finished 4-8 last season, but won two of their last three games.

In the 12 years leading up to last season, Boston College never failed to post a winning record or qualify for a bowl game. The Eagles strung together eight consecutive bowl wins from 2000-2007, and their 12-year bowl run was tied for the sixth longest active streak in the country. BC’s consistency over that period was remarkable, and the program, under former head coach Jeff Jagodzinkski, was unequivocally on the rise. In 2007, the Eagles, led by Atlanta Falcons star quarterback Matt Ryan, won 11 games, went 6-2 in the ACC and topped Michigan State, 24-21, in the Champs Sports Bowl. Jadgozinski, a young coach with star potential, was drawing interest from NFL front office-types and general managers. He interviewed for the New York Jets’ head coaching job against the wishes of athletic director Gene DeFilippo, who promptly fired Jagodzinski the next day.

Just six days later, Frank Spaziani, who served as the Eagles defensive coordinator for nine seasons, was elevated to fill the head coaching vacancy. Spaziani had been known for his trickery and imaginative blitz schemes and was often referred to as “The mad scientist” for his deceptive play calling. Since taking over as head coach, Spaziani has failed to continue the positive momentum built under Jadgozinski, and the Eagles have posted steadily declining win totals, with nine in 2008, eight in 2009, seven in 2010 and four in 2011.

DeFillipo’s decision, in hindsight, was probably the wrong one. Jagodzinski had established a winning culture and the Eagles were emerging as a perennial ACC contender alongside the likes of Florida State and Clemson. Spaziani’s defensive expertise hasn’t translated into wins, and the program has lost a measure of its once sterling reputation as an institution with rigorous academics to go along with a highly-successful football team.

Last season, the Eagles went 1-3 in the nonconference portion of their schedule, the one win coming against then FCS-for UMASS (The Minutemen will join the Mid-America Conference in 2012 and officially gain FBS status). They would go on to lose their first three games of conference play, two of those on the road against ACC powerhouses Clemson and Virginia Tech. The Eagles bounced back to go 3-2 in their final five contests, with wins against Maryland, North Carolina State and Miami. The offense struggled mightily for most of the season, and finished last among ACC teams in points per game (18.2), while the defense, as expected under Spaziani, was one of the league'stougher, stingier units, thanks in large part to middle linebacker Luke Kuechly, who won the Lombardi Award, Lott IMPACT Trophy and Nagurski awards and was recognized as a first team All-American for the second straight season.

As it stands, Spaziani likely will need a winning record in 2012 to save his job, and given DeFillipo’s quick trigger, the defensive specialist may get the boot if the Eagles struggle early on. Boston College needs to restore its luster, to energize the fans, players and the program as a whole. There’s a good chance Spaziani will not be part of that process.

What to Expect on Offense

Part of the reason for the Eagles’ subpar offensive output last season was the declining health of running back Montel Harris, who rushed for 2,700 yards combined in 2009 and 2010 but played in just two games last season because of a knee injury. Harris, the school’s all-time leading rusher, was dismissed from the team in the spring for repeatedly violating team rules.

The Eagles struggled to find an identity without their bellcow, go-to ball carrier last season, and they face a similar challenge this season after hiring a new offensive coordinator, Doug Martin, in December, the team’s fifth OC in the past five seasons. Martin has nine returning starters to work with, but the offense faces more questions than answers.

While replacing Harris is impractical, the Eagles can recall their run-oriented offensive attack with a trio of talented backs: Rolandan Finch, Tahj Kimble and Andre Williams. Junior quarterback Chase Rettig has struggled in the past with injuries and grasping new offensive schemes, though he should improve this season given the Eagles’ experienced offensive line and a better overall understanding of the offense.

What to Expect on Defense

Whereas the offense sputtered in epic fashion throughout conference play, the Eagles’ defense played with resolve, inspired to preserve some semblance of dignity amid a failed season. It allowed an average of 18 points in its final three games, two of which the Eagles won.

Kuechly was the heart and soul of the defense, and his presence will be sorely missed. Yet the Eagles return a talented corps of linebackers, led by Kevin Pierre-Louis and Steele Divitto. Neither can replace Kuechly, but a strong collective effort can help atone for the loss.

There’s plenty of returning talent along the defensive line, with tackles Kaleb Ramsay, Dominic Appiah and Dillon Quinn along with end Kasim Edebali forming the core of a deep and talented rotation. In the secondary, Jim Noel and Spenser Rositano provide stability at cornerback and safety.

Frank Spaziani’s defenses have always played with toughness, grit and purpose. This year’s group should be no different.