Share All sharing options for: Sina's Commitment Signals A New Direction for Northwestern 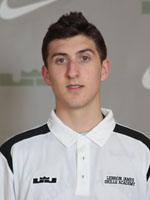 Much like Pat Fitzgerald’s crew was able to defer attention from its fourth bowl loss in four seasons by signing Kyle Prater and Ifeadi Odenigbo, Carmody has managed to hide the sour stench of a season gone awry with a couple of notable off-season signings.

Let’s not forget just how sour the feeling was in Evanston after Washington obliterated Northwestern in the second round of the National Invitation Tournament. The Wildcats didn’t even appear to belong on the same court as the Huskies in their 76-55 loss in Seattle, as Terrence Ross and Tony Wroten flashed their National Basketball Association potential for 40 minutes of exhilarating basketball. Afterward, many suggested that perhaps Northwestern simply wasn’t good enough, that it lacked the four-star and five-star recruits necessary to compete with the Washington’s and Ohio State’s of the world. This off-season, the Wildcats addressed such concerns by improving the skill level present on their roster.

Following the devastation of another failed NIT run, and the loss of its all-time leading scorer, Northwestern signed a 7-foot-2 center named Chier Ajou, an acquisition that promised to ease, if not erase, the Wildcats’ longtime struggles in the paint. They signed Jared Swopshire, a transfer from Louisville, which seemed to indicate that maybe the best way for Northwestern to compete with the best in the nation was to sign those who had played with the best in the nation. Swopshire’s experience with the Cardinals certainly bodes well for the Wildcats. Now, they’ve signed the 13th-best point guard in the country, according to ESPN.

As one ESPN analyst wrote, Sina has a “lethal jump shot.” The New Jersey native boasts an “effortless stroke that is virtually automatic when in rhythm from anywhere inside of 25 feet.”

Sina’s greatest importance, however, might not be in the shots he buries, but in the failed dreams he has already helped bury. With the signing of players like Sina, Carmody has effectively helped Northwestern fans put thoughts of 2011-2012 behind them, and has given them something to look forward to in the future.