Share All sharing options for: Michael Juice Thompson gets invited to NBA minicamp 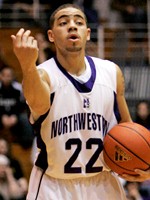 It was just last week that John Shurna, Northwestern’s all time leader in scoring (2,038 points), blocked shots (136) and games played (130), signed a summer league contract with the Atlanta Hawks. Summer league contracts provide little long-term security, and Shurna must distinguish himself among the competition within the 5-game summer league slate in order to earn an NBA call-up.

Now NU has another former player with the chance to earn an NBA roster spot in the summer league circuit . Michael Juice Thompson, who spent last season playing in the German Bundesliga with the Fraport Skyliners, announced yesterday on his Twitter account that he has been invited to the New Orleans Hornets’ minicamp. Much like Shurna, Thompson set several records during his time at NU, including assists (528), minutes played (4,633) and Games started (129). He was unquestionably one of the greatest players in school history and his departure hurt the Wildcats in more ways than one last season as they failed once again to qualify for the NCAA Tournament. In 27 games with Fraport, Thompson averaged 8.5 points and 1.7 assists and led the Skyliners to a fourth place finish in the 2011-2012 Eurocup, a transnational competition pitting the best 32 teams from European domestic leagues with the winner gaining admittance to the 1st tier Euroleague.

It’s good to see Thompson get a chance to prove himself against some of the world’s best young players, even if the trial may be short-lived. He proved during his NU tenure that he can score and pass effectively while running one of the most complex offensive systems in the game today. His talent translated well to the European game, it seems, and he regularly confounded some of the nation’s best college players in the Big Ten, so there really is no harm in taking a chance on the NBA.

Thompson’s best shot at an NBA roster spot is as a high-energy backup point guard, a change of pace scoring sparkplug capable of maintaining fluidity on offense and playing composed, disciplined defense. In college, he was the Wildcats’ primary ball handler, go-to scorer and leader. Thompson was free to shoot, dribble and pass however he so chose, as long as it fit into Carmody’s game plan, and he usually found a way to make it work. In the NBA, his role would be limited and he’d need to make an impact as much with his emotions and leadership qualities as he would with his scoring, passing and ball handling.

Making an NBA roster may be more difficult for Thompson than Shurna, even with Thompson having already played a full season of professional basketball. Thompson, for all his skills, work ethic and intangibles, is small for his position and that alone will hurt his chances. There are exceptions, and Thompson played his entire college career with the same inherent disadvantage. But in this golden age of point guards in the NBA, where the likes of Russell Westbrook, Derrick Rose and Deron Williams furiously attack the rim with little resistance from even the league’s most elite defenders, it would seem that strong perimeter defense is becoming more of a priority. Thompson, at 5-10, 190 pounds, lacks the baseline physical tools to excel on the defensive end, though his tireless work ethic and bulldog attitude will help him atone for those shortcomings.

Though his success at NU and Germany suggests differently, Thompson’s chances at an NBA roster spot are slim. All in all, though, the overall takeaway from his NBA aspirations is that Thompson is a hard-working and ambitious competitor, one who’s not willing to give up on his dreams for lack of size or whatever other hurdles stand in his way. He was a transcendent player who for years lit up Welsh-Ryan Arena with his sweet stroke and deft passing. While that may not continue in the NBA, Thompson’s effort is encouraging.