Share All sharing options for: Most Important Player Rankings: No. 1, QB Kain Colter

Today, we finish off our countdown.....and the winner is: QB Kain Colter (Northwestern's 2012 MIP) 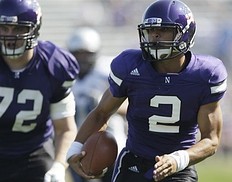 The Wildcats need Colter to emerge as a leader in 2012 (Photo courtesy Nam Y. Huh/AP Photo).

You probably could have seen this one coming way back when we kicked off our MIP rankings with Patrick Ward two weeks ago. Quarterback is, of course, the most important position in the game of football as we know it today. He touches the ball on nearly every offensive play, relays the game plan to his teammates and facilitates last-second tweaks and audibles at the line of scrimmage. All of these decisions are crucial to any team’s success. If a quarterback fails in executing any or all of these fundamental duties, a team’s ability to score and, more to the point, chances of winning drop precipitously. For some teams—usually ones with run-oriented offenses—quarterback play carries less importance, and these teams ask their qb to simply “manage the game”, which is a polite way of saying “just don’t screw up too much.” Northwestern, the 2012 version, is not one of those teams, not one of those offenses willing to allow quarterbacks to play conservatively. Colter needs to make plays—with his legs, his arms and most importantly his brain—in order to maximize the explosive potential of this offense.

His best weapon is his ability to evade pressure and turn negative plays into extremely positive ones by outrunning defenders. We saw last year in the Nebraska game just how potent Colter can be as a running threat, the way he makes defenders miss, leaps, hurls and tumbles himself into the end zone. It’s awfully impressive, and it makes for great highlights, but now that he’s a full-time starter Colter may need to alter his approach. Run first quarterbacks are effective in certain systems, most notably option offenses like Georgia Tech and Navy. Coaches hand pick athletic quarterbacks with specific skill sets for these kinds of quirky systems not for their arm strength, accuracy or pocket poise, but their ability to run, spin and juke away defenders. There’s little doubt Colter could thrive in one of these unique offenses, given his speed, toughness and all around athleticism. But he needs to channel those elite athletic tools into a more conventional but still quirky system at NU. These are favorable qualities for any quarterback’s repertoire, because they provide an edge over, say, quarterbacks who can’t simply run their way out of trouble. The difficulty for Colter is erasing—out of sight, out of mind—the notion that his athleticism is his first option, that he’s better served running than throwing the ball.

NU run its own flavor of the now in vogue spread offense, featuring a large dose of short and long pass plays with some option, end-arounds and conventional running plays mixed in. The system is complex, and it requires a multitalented quarterback with elite physical tools and astute schematic acuity to fire its cannons in a quantifiably successful way. If Colter can improve his throwing ability, the offense could be more potent than we’ve seen it in the past few years under Dan Persa and Mike Kafka. That may be a stretch, considering Colter has yet to play a full season at quarterback. But he just may be the most athletic signal caller to take the reins of NU’s spread since it’s implementation in 2000 by the late Randy Walker. Given Colter’s unique skill set—he lined up at wide receiver, running back and quarterback last season and was inarguably the team’s most versatile offensive weapon—an improvement in arm strength and passing accuracy could elevate NU’s offense atop the league ranks this season. The Wildcats boast the deepest and arguably the best group of receivers in the Big Ten, meaning Colter will have plenty of targets on every designed pass play. Because he is a threat to run the ball on every offensive snap, defenses will hover around the line of scrimmage, which opens up space downfield for the receivers to exploit. The receivers will make plays; Colter just needs to get them the ball. Provided his throwing ability improves—he hit receivers with crisp passes during spring practice, yet lacked the accuracy needed to sustain a respectable completion percentage—the offense will thrive.

In recent years, the Wildcats have won games with their offensive firepower. This season will be no different. NU will be forced to outscore teams, to provide leads large enough that not even this year’s inexperienced secondary can squander. Colter is charged with marshaling the offensive troops and harnessing Mick McCall’s high-flying attack into an efficient scoring machine. The bottomline is this: the offense goes as Colter goes.