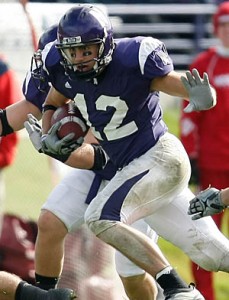 The Eagles are thin at receiver after losing Cooper and Johnson to injury, which opened the door for Brewer to compete in training camp.

During his senior season at Northwestern, Andrew Brewer, a converted quarterback, emerged as one of the top receivers in the Big Ten. He caught 57 passes for 925 yards and nine touchdowns, while channeling the high football IQ from his quarterback days into an effective perimeter playmaking force and developing a rapport with quarterback Mike Kafka. Despite his stellar senior season, Brewer went undrafted, then signed with the Omaha Nighthawks of the United Football League. Meanwhile, Kafka was taken in the fourth round of the 2010 draft by the Philadelphia Eagles, where for two seasons he has served as the third-string quarterback. He continues to make progressive strides in practice and preseason games, but he’s yet to make a large impact in any meaningful competition. This season, Kafka will battle for the No. 2 spot on the depth chart. For the Philadelphia eagles, winning the backup qb job is pretty significant, considering starter Michael Vick’s checkered injury history.

It appears Kafka will get some help from one of his favorite former receivers as he battles rookie Nick Foles and veteran Trent Edwards for the backup job. The Eagles announced yesterday they had signed Brewer, Kafka’s No. 1 target during his senior season. Philadelphia needed to sign another receiver after two players, Ron Johnson and Riley Cooper, sustained severe injuries. Johnson will miss the entire season, while Cooper, one of the better young receivers in the league, underwent surgery Monday to replace a broken collarbone and will return in six weeks. The new NFL collective bargaining agreement stipulates that players signed during training camp must sit out three days before participating, meaning Brewer will join the team at Lehigh University in Bethlehem, PA, on Friday.

More than anything else, this seems like a reactionary move to the recent flurry of wide receiver injuries. The Eagles needed some training camp legs and a player capable of competing in position drills and scrimmages. Brewer provides as much, along with an intriguing overall skills-to-body package. Brewer will get plenty of reps, which provides him an opportunity to prove he belongs on the roster. And he probably couldn’t ask for a more favorable situation: Brewer, for the first time in three years, is reunited with the quarterback, Kafka, that turned him into such a productive college receiver. He will need to rekindle that connection in order to convince Eagles coaches he’s worth keeping around.

I watched Brewer run routes with Jeremy Ebert and Drake Dunsmore, both seventh-round draft picks, at NU’s March pro-day. He ran well, made sharp cuts and caught almost everything thrown his way. What really impressed me was his agility and all-around athleticism, the way he quickly changes directions and accelerates off the break. He could develop into an effective slot receiver in the NFL. An added bonus for Brewer is his size. You don’t often come across receivers with great quickness and acceleration packaged within a 6-3, 215-pound frame. That physique makes him a desirable target and a load to bring down after the catch. In Andy Reid’s free-flowing West Coast offense, he could serve as a modified tight end-wide receiver hybrid.

Much needs to be resolved before the season begins, and Brewer needs to prove his worth in training camp workouts and preseason games. If he makes the roster, he will likely start out on special teams. Still, this is a nice story for a player who certainly deserves a shot at the NFL. Kafka and Brewer were extremely productive while at NU. If they can establish that same sort of synergy on the Eagles training camp grounds, both players will be better off as a result. As Kafka battles for the backup quarterback job and Brewer fights for a roster spot, at least they can take solace in their NU partnership and use their past as a platform for success.