Every Friday, Inside NU will do a “Take Two,” giving you our opinions on a major topic surrounding Northwestern or college sports in general. Today, we take our best shots at predicting the Wildcats’ most impactful newcomer on the hardwood. Click here, for last week’s edition, where we make a case for the most productive wide receiver this season.

Training camp is officially in full swing, which means football, believe it or not, will be here before you know it. It won’t be long before the Wildcats make their way to Syracuse, NY, for their season-opening matchup with the Orange, in what figures to be one of the most intriguing non-league matchups on this year's college football calendar. Before we get there, though, there’s plenty to be resolved in preseason preparation. Position battles are of prime importance at this time of year, and Northwestern has several important depth chart quandaries to sort out in the next few weeks. We released our camp primer earlier this week, and our own Kevin Trahan penned an in-depth piece on five position battles to watch. It’s a diverse sample, all of them hugely important to the Wildcats’ success in 2012. But we didn’t think it was enough, so today we’re bringing you our personal favorite: the position battle we feel carries the most intrigue heading into the upcoming season. Like most of these arbitrarily constructed exercises, it’d be nigh impossible to lay out a rational method to our madness, but if you read the explanations, hopefully our intentions become clear and you can come away with some keen insight on how these contests will play out. 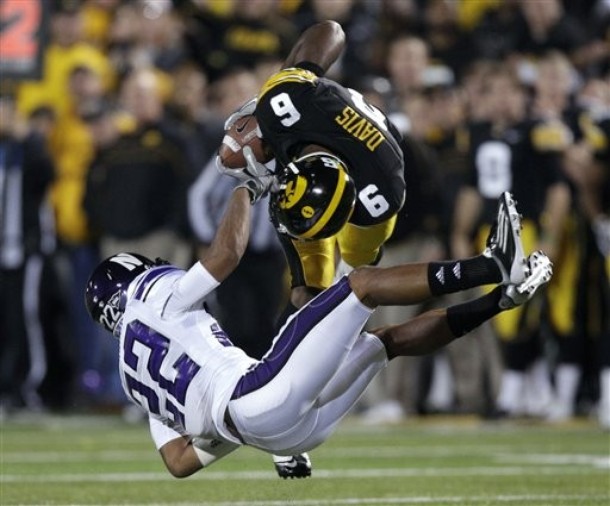 In his second career start, Dugar impressed against Iowa. He faces an uphill battle in beating out VanHoose for one of two open starting cornerback positions (Photo courtesy Charlie Neibergall/AP Photo).

A more inclusive revision of this particular battle would include sophomores C.J. Bryant and Daniel Jones. In the interest of sparing you from reading relatively meaningless content concerning players who, frankly, won’t—barring injury or other unforeseen events—compete for the starting spot, I’m limiting my analysis to two competitors. The reason this conflict ranks at the top of my preseason personnel predicament scale is relatively simple: NU’s pass defense, after posting the Big Ten’s worst passing yards allowed (230.4) metric last season, carries the distinct possibility heading into this season of credible regression, a horrifying concept for Wildcats fans subjected to a steady dose of aerial onslaught for much of 2011. Without Jordan Mabin and Brian Peters, two dynamic playmakers and vocal leaders, the pass defense enters this season with one (gasp!) returning starter, a fifth-year transfer short on experience and little else. That one returning player is Ibraheim Campbell, last year’s leading tackler. Campbell, by all accounts, is a promising player, the type of active presence who could eventually become a Mabin/Peters-type leader. Problem is, Campbell’s impressive play will all go for naught, unless the players filling in around him can offer some measure of consistent performance.

Neither cornerback spot is definitively sealed off, but one very well could be. That Stanford import Quinn Evans chose NU to play out his final year of eligibility suggests he’s all but certain to begin week one atop the depth chart. So for the purposes of this operation, we’ll assume there’s only one spot up for grabs. To presage this discussion, It’s worth noting that VanHoose holds a slight advantage in this early phase of training camp. He excelled throughout spring practice, seemingly reinvigorated after a hamstring injury disrupted what could have been a promising freshman campaign. In fact, coach Fitzgerald considered using VanHoose, rather than Jones, in the Michigan State game when Mabin went down with an injury. Instead Jones gave his very best effort and VanHoose preserved a years’ worth of eligibility. Now he’s ready to begin his career as a starter. The redshirt year allowed VanHoose to develop, physically and mentally. He emerged a better all-around player, equipped with a greater schematic understanding of the defense as well as a thicker frame conducive to the physical coverage coordinator Mike Hankwitz wholeheartedly encourages.

Perhaps the one area where Dugar holds a discernible edge is experience. He’s played in 33 games in three years and provided glimpses of starter-level ability in limited time last season. Against Iowa, Dugar totaled six tackles, one tackle for loss and an interception. He followed that impressive performance with an admirable 3-tackle showing against Penn State. While injuries sidelined him for three of the Wildcats’ final five games, the abridged synopsis of Dugar’s 2011 reflects encouragingly on an overall positive momentum-building season. Carrying that momentum into spring practice, harnessing it, and channeling it into an overwhelmingly impressive performance—one strong enough to beat out VanHoose—is the next order of business.

From this distant vantage point here in August, it appears VanHoose will line up with the first team defense on that first September Saturday at the Carrier Dome. Given his inexperience and the deluge of balls expected to be thrown his way— it only stands to reason opposing teams will use overridingly air-heavy gameplans against NU’s weak defensive backfield, and more specifically against VanHoose, the perceived weak link in an all-around weak secondary—there will be growing pains. Which means Dugar, even if he fails to win the starting job out of camp, more often than not will get at least one start this season. Fitzgerald may opt into the more experienced (and perhaps safer) option from the get-go by starting Dugar, or he could use the young but talented and physically-gifted VanHoose. Whoever comes out on top, the cornerback position will in large part determine how the Wildcats’ defend the pass, their most glaring vulnerability heading into this season.

Pat Fitzgerald summed up the super back battle well in, at NU's media day this Wednesday: " We stack up with a lot of names. Do we have roles defined yet? No."

That's another way of saying "there are a lot of players competing there, but we have no idea who is going to start."

Most position battles at NU have a defined "battle" between two or three players, but at super back, it's tough to pick a leader out of the pack. Right now, it would likely be junior Tim Riley, who switched to superback in bowl practices last year and played there in the Meineke Car Care Bowl of Texas behind three-year starter Drake Dunsmore. He even had a touchdown catch in that game, and even though he played in only one game at superback, he's NU's most experienced player coming back at that position.

But does that mean Riley has an advantage over anyone else in the field? Hardly. One game worth of experience won't help Riley too much in the long run and he has plenty of worthy challenges — or, at least as worthy as him. Three other superbacks were on the roster in the spring — redshirt freshman Mark Szott, junior quarterback-turned-superback Evan Watkins and junior Brian Smith.

Watkins switched to superback during bowl practices because he was likely never going to see the field at quarterback, and while it's still unlikely that he gets on the field much at superback, he at least has a chance at getting some playing time considering how little experience there is at that spot.

Szott is an interesting player to keep an eye on, and Fitzgerald even mentioned him during his media day press conference. Most people are focusing on the true freshmen coming in (more on them later), but Szott was a three-star recruit coming out of high school and certainly has the talent to be a contributor this season, if not a starter. If he has a good fall camp, he could be a surprise stater for NU on September 1.

And now to the true freshmen, Jack Schwaba and Dan Vitale. Vitale was a three-star safety recruit in high school, and while he definitely has a chance to see the field at superback in the future, he's not as big as Schwaba and that could hurt him, just as it does a lot of true freshmen who want to play immediately. I'd expect one of the freshmen to redshirt, and right now, that would be Vitale.

Schwaba has received more hype than Vitale and some people are predicting him to be the starter immediately. It's possible, but considering how big of a transition it is to go from high school to college in football, he likely won't be the starter in Syracuse for the season opener. However, he certainly has potential and could become the starter eventually and could receive playing time in the first game.

Predicting the starter in this case is tough. Originally, I thought it would be a race between Riley and Schwaba, but don't sleep on Szott, who appears to be firmly in the mix. A number of players will receive playing time no matter who the starter is and that starting spot could rotate throughout the season. It should be a very interesting position battle to watch as fall camp unfolds.