Treyvon Green Okay After Being Hospitalized Due to Practice Injury

Share All sharing options for: Treyvon Green Okay After Being Hospitalized Due to Practice Injury 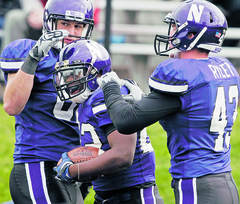 Northwestern sophomore running back Trevyon Green was injured in practice Friday, going down after a big hit to the chest. According to Fox Sports Next's Chris Emma, who was at practice, Green was on the ground for more than 15 minutes and taken to the hospital in an ambulance with head coach Pat Fitzgerald and recruiting coordinator Matt MacPherson. Emma said the players were "visibly shaken" and practice was ended immediately.

While it was a scary incident, Green is expected to be make a full recovery and was taken to the hospital for precautionary reasons. He was expected to be released Friday evening. Here's a statement from Pat Fitzgerald on the incident.

"During Friday's practice, sophomore running back Treyvon Green was injured and transported to the hospital for precautionary reasons. After a thorough evaluation, all tests results returned negative and we expect Treyvon to be released from the hospital this evening and make a full recovery. I would like to thank our entire athletic training staff for their quick response and care in this situation. The safety and welfare of our student-athletes, for which we are responsible on a daily basis, is our top priority at all times."

We'll have more updates as we get them from Northwestern's athletic department, but obviously the initial report is great news. People tend to fear the worst these days with football injuries after injuries to players such as Eric LeGrand at Rutgers, who was paralyzed during a game. However, Green was fortunate and will reportedly be fine. NU didn't have any updates on whether Green will practice in the coming days — we'll likely learn more when the Wildcats head to Kenosha on Monday — but that was the least of anyone's worries on Friday.

This is the second time in a week that NU has had a scary practice incident. On Monday, the first day of practice, true freshman running back Malin Jones collapsed on the field due to severe dehydration.

Stay with InsideNU and Fox Sports Next for more on Green's story and recovery as more details are released.