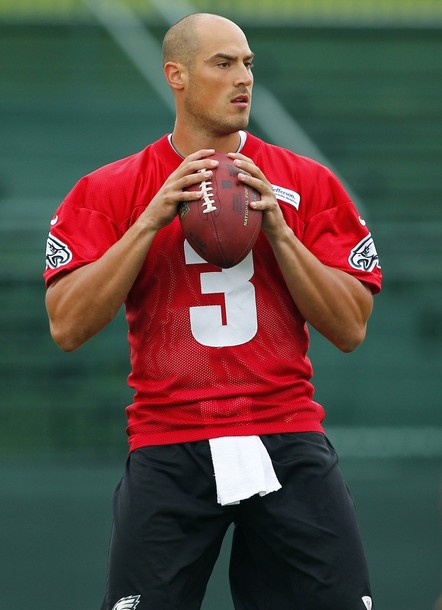 The backup quarterback battle in Philadelphia will remain unresolved over the next three weeks as Kafka rehabilitates his injury (Photo courtesy Rich Schultz/AP Photo).

There is a borderline decent chance that former Northwestern quarterback Mike Kafka will temporarily serve as the starting quarterback this season for the Philadelphia Eagles. The reasons for this are simple. First-string QB Michael Vick has started 16 games in a season only once, including a maximum of 13 starts since returning from a two-year long prison sentence for his involvement in a highly-publicized dogfighting scandal. He is, by all accounts, an injury-prone quarterback. Injuries, of course, owe themselves mostly to variance—things happen, people get hurt—but Vick’s unique brand of quarterback play, which involves frequent downfield running and challenging defenders one-on-one, makes him more susceptible to injury than more conventional pocket-passing quarterbacks. So while Vick certainly could start 16 games this season, history suggests he will not.

That raises the stakes quite a bit on the Eagles’ backup quarterback job this season. After all, if Vick goes down, Philadelphia needs a serviceable quarterback who can step in, facilitate coach Andy Reid’s West Coast Offense and win a game or two. Heading into training camp, Kafka held a slight edge over rookie Nick Foles, the team’s third-round draft pick out of Arizona. In the team’s first preseason game, Foles got the better of the elder Kafka with 144 yards on 6 of 10 passing and two touchdowns to Kafka’s 31 yards on 5 of 9 passing. Eagles fans took to Twitter with vehement pleas for Foles to supplant Kafka at No. 2 on the quarterback depth chart. While no changed have been made—Kafka remains the backup quarterback for now—the race gained a layer of intrigue Saturday, when Reid announced that Kafka, who had his hand stepped on during the preseason game, sustained a fracture that will keep him from partaking in team drills for the next three weeks. In the meantime, Foles will take snaps as the team’s backup and will likely see a bump in playing time in the team’s next three preseason games.

Reid was brief in addressing the situation (Per the Philadelphia Inquirer):

We’ll see how that all works out," Reid said. "Keep an eye on it as we go"

Kafka could be seen with his left hand wrapped after Monday's walk-through, although he was rushing to a meeting and did not have time to comment on the injury.

Reid also said that rookie Nick Foles will take the snaps with the second-time offense in Kafka's absence.

Tough blow for Kafka. The window of opportunity had widened for Kafka this preseason, with former backup Vince Young leaving  in the offseason and only Foles, a promising rookie, standing in his way. Surely a convincing performance in training camp would have secured the backup spot. Kafka appeared in four games last season and posted a respectable %68.8 completion percentage on 11 of 16 passing for 107 yards and two interceptions. His skill set—strong running ability to go along with above-average arm strength and accuracy—fits well within the Eagles’ West Coast system. Kafka is a true dual-threat quarterback, a favorable second option behind Vick, long regarded as perhaps the NFL’s best ever athlete at the position. Yet Vick’s playing style, effective as it may be, has contributed to his checkered health track record, and it’s fair to expect him to miss at least one, if not part of one game this season. Which is why Kafka, more often than not, will have a legitimate chance to play meaningful snaps this season for a team expected to contend for the playoffs. Only that path to regular season playing time has hit a roadblock, and Kafka must overcome it.

He always displayed remarkable toughness at NU, and there’s nothing suggesting this injury will linger or have any effects on his performance long-term. In the short-term, it’s a troubling setback at an inopportune moment. If Foles performs well in training camp and the preseason, there’s nothing Kafka can do to prevent his rise. The best he can hope for now is a speedy and successful return, with a strong push at the end of training camp to reclaim his position. For all his size (6-6, 243 pounds), pocket poise and arm strength, Foles doesn’t fit the West Coast mold quite as well as Kafka, no doubt the quicker and more mobile quarterback. Still, with Kafka sidelined, Foles—by default—is the backup. It’s tough to forecast how this will all play out. Foles’ performance over the next three week’s will be telling, as will Kafka’s performance upon return. Not the greatest news, but something Kafka should take on with determination and poise.