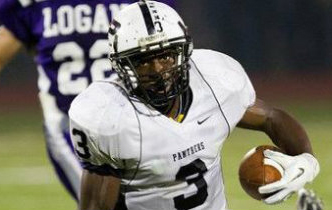 At first glance, the news breaking late Thursday afternoon may be the most significant development on the Northwestern football recruiting front since four-star quarterback Matthew Alviti gave his verbal commitment in April. Word leaked through Twitter, naturally, that Godwin Igwebuike, a 6-0, 190-pound athlete from Pickerington (OH), had joined NU’s class of 2013. Last season, he rushed for 1,050 yards and 14 touchdowns at a whopping 9 yards per carry clip. On defense, he intercepted six passes while lining up at safety and cornerback. While it’s unclear what position he’ll play at NU—“Having an option to play on both sides of the ball was a big factor for me,” he told PurpleWildcats.com--the consensus is that Igwebuike is a better fit at safety. He chose NU over more than a dozen schools, including Boston College, Cincinnati, Illinois, Michigan State, Nebraska, Minnesota, Pittsburgh, North Carolina State, Wisconsin and West Virginia.

Whether he plays safety, cornerback or running back, Igwebuike is a prized asset, one who more likely than not will be a multi-year starter for the Wildcats. By Scout.Com’s standards, Igwebuike is a three-star, but the consensus is that he’s nudged right up against the 3/4 barrier. Arbitrary rating systems aside, Igwebuike is probably the second best overall player in the 2013 class to this date. He’s an instinctive player with great ball skills, on offense and defense, not to mention favorable size, with length to add more bulk once he arrives on campus. If the Wildcats’ secondary woes persist into Igwebuike’s freshman season, he may forego the redshirt year and step in at safety alongside Ibraheim Campbell right away. This is all a bit premature, sure, and he may never live up to the hype. Point is, NU added an intriguing player, on paper at least. Plus, it never hurts to steal a recruit from your league rivals. The Spartans, Gophers, Huskers, Hoosiers and, yes, the Illini were all in on the Igwebuike pursuit trail; that NU emerged victorious amid a host of Big Ten foes is an added bonus. If Igwebuike, as expected, steps in at safety, his addition—while not quite as significant as last year’s commitment of four-star outside linebacker Ifeadi Odenigbo—gives NU a defensive headliner in 2013 to go along with Alviti, the offensive crown jewel.

Below are some impressive video highlights of Igwebuike's junior year at Pickerington high school.

The latest pick-up brings NU to 17 commits in 2013, which ties Iowa for second in the Big Ten behind Michigan (23). I’ve never put too much stock into star rankings; coaches know what type of player fits their program, whether he be a one, two, three, four or, as coach Pat Fitzgerald once said, a “0-star”. But in the interest of providing some context for how NU’s class ranks among Big Ten teams, the 2013 crop currently boasts an average star rating of 2.94, which is tied with Iowa for seventh in conference. Michigan’s class continues to dominate regional and national headlines, its most recent star assessment rating out at 3.83.

Fox Sports Next/Scout released its latest class rankings Thursday, and Northwestern, benefitting from a fortuitously-timed rankings revamp, rolled in at #26 nationally and #4 in the Big Ten. It’s hard to make too much out of a general recruiting site’s “rankings”. This doesn’t mean NU has the fourth “best” crop of players, though it does point to a discernible improvement in the Wildcats national cachet on the recruiting scene. Even if its class isn’t what these rankings make it out to be, recruits take these superficial orderings pretty seriously. For better or worse, prospective NU commits will see these rankings, make note of the program’s impressive standing and adjust their perceptions accordingly. Class rankings should never make or break a prospect’s commitment, but seeing that lofty status provides a comforting reassurance factor for players who once might have demeaned the Wildcats’ recruiting standards to a lower, less appreciable level. It also doesn’t hurt when your rise in the system is accompanied by a brand-name pickup like Igwebuike. The two events couldn’t have dovetailed in a more opportune way for a program that’s clearly on the rise in recruiting circles.