Share All sharing options for: Secondary using competition to prepare for upcoming season

It’s hard to argue that the single most glaring weakness for Northwestern last season was the pass defense. The Wildcats yielded an average of 230.4 passing yards per game, good for 12th among Big Ten teams. League opponents regularly gutted their leaky pass defense, and NU was constantly pressed to win games by outscoring opponents—low-scoring games were few and far between.

The most memorable example of their pass defense ineptitude came, naturally, against state rival Illinois, when in an Oct. 1 matchup in Champagne, the Wildcats ceded an 11-point fourth-quarter lead thanks largely to 391 passing yards and three touchdowns from quarterback Nathan Scheelhaase. That gut-wrenching loss marked the beginning of a season-long air raid, with quarterbacks of all shapes, sizes and skill levels cashing in on the Wildcats’ feeble defensive backfield. One week after Scheelhaase unleashed a dazzling display pinpoint passing at their expense, the Wildcats were besieged by yet another dual-threat quarterback, this time Michigan’s Denard Robinson, who went off for 337 yards and two touchdowns in a 42-24 comeback victory. Then it was Iowa’s James Vandenberg (224 yards, two touchdowns), followed by Penn State’s Matt McGloin (192 yards, two touchdowns) and on down the line to the Meineke Car Care Bowl, where Texas A & M’s Ryan Tannehill (329 yards, one touchdown). 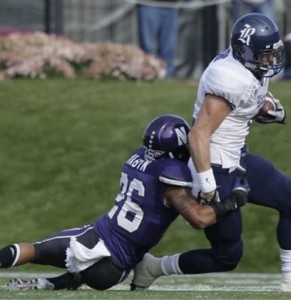 Opponents would strike quickly, which forced the Wildcats’ offense to respond with scores of their own. And while they managed to win six games by that imperfect formula, it’s not a sustainable approach. This season, the secondary looks to turn the page, only it won’t have its two main leaders from last season: cornerback Jordan Mabin and safety Brian Peters. Replacing those two players is a daunting endeavor, but the Wildcats, as they continue preparing for the season opener on Sept. 1 at Syracuse, have developed a competitive training environment to help raise performance levels among the myriad DBs vying for playing time. After all, with so little experience, competition is the only way to sort out an increasingly muddled pass defense rotation.

“I think it’s been really healthy for us, all the competition. It’s made a lot of us really step up and play a lot better,” said Davion Fleming of the secondary’s position battles. “We don’t have that much experience so we have to get it in practice, so it’s just been really good having the competition, it’s been pushing us along a lot further.”

The competition over the next couple weeks in training camp will be paramount in deciding who wins the safety spot alongside Ibraheim Campbell, the secondary’s lone returning starter. Fleming, a junior who played sparingly behind Campbell and Peters last season, has the inside track on the starting spot, though converted wide receiver Jimmy Hall is making a strong push for the job as well. At 6-2, 205 pounds, Hall boasts overall better physical tools, while Fleming has a better understanding of coach Mike Hankwitz’s defense. Senior Jared Carpenter is a long shot to beat out Fleming and Hall, but he will nonetheless provide veteran leadership as a reliable backup.

Even if he isn’t playing with the first team from week 1, Fleming has one objective on his mind.

The picture at cornerback is even more unresolved. Redshirt freshman Nick VanHoose, senior Demetrius Dugar and Stanford transfer Quinn Evans appear deadlocked in a battle for the two starting spots. While VanHoose submitted an impressive spring practice, Dugar—who recorded six tackles, one tackle for loss and an interception in his second career start at Iowa last season, followed by an impressive three-tackle performance against Penn State, but missed three of the final five games with an injury—is more experienced, with a proven track record within Hankwitz’s system. Evans is an athletic force with a high football IQ who should feature prominently in the cornerback rotation, even if he doesn’t win a starting job out of camp.

Campbell is the only returning starter in the secondary this season (Photo courtesy Bob Levey/Getty Images).

The competition has raised the stakes in camp, introducing a high-energy, upbeat group environment. VanHoose relishes the intense feel of recent practices.

“Practices have been a lot more intense, a lot more game situation type stuff,” he said. “I’ve seen that when we came out the first couple days of practices there were a couple things I had never seen before. Now I’m looking for those things to use in future practices. So I’m just getting better from that.”

Chief among the Wildcats’ secondary concerns last season was communication. The lack of cooperative in-game chatter allowed for confusion and mass disorder. With Campbell assuming a leading role, there’s been a much greater emphasis on talking in workouts, practice and scrimmages.

“This year for our communication I’d just say we’ve been a lot louder—a lot louder  with our hand signals and motions. We’re making eye-to-eye contact, trying to get that down.”

Even if the Wildcats can improve their communication, it remains to be seen whether Campbell can fill the massive leadership void left in the wake of Peters and Mabin. Still, with all the uncertainty, Campbell has high hopes for this year’s pass defense.

“I think we have all the potential in the world,” said Campbell, gauging the secondary’s latent capabilities. “I don’t really see a limit. So if we put it together correctly we can go pretty far.”

With more than two weeks of competition remaining before the Wildcats make their way to Syracuse, it’s hard to forecast who will emerge as starters. The way Campbell sees it, none of that matters all too much. As for whether his words prove true, only a season’s worth of games can determine the validity of his assessment.