Take Two: Which True Freshman Will Make an Impact This Season?

Share All sharing options for: Take Two: Which True Freshman Will Make an Impact This Season?

Every Friday, Inside NU will do a “Take Two,” giving you our opinions on a major topic surrounding Northwestern or college sports in general. Today, we take our best shots at predicting the Wildcats’ most impactful newcomer on the hardwood. Click here, for last week’s edition, where we make a case for training camp's most intriguing position battle.

Each and every year, there are players who veer from the typical developmental timetable by foregoing the customary “redshirt” season and taking the in year one. This is not common. Players normally need one season to find their bearings within the program, to settle into a new group of teammates and coaches, to lay the foundation for future development. The reasons are numerous and wide-ranging, but more often than not recruits make their commitments knowing they won’t suit up during their first year on campus.

The class of 2012 was arguably the best in Northwestern’s recruiting history, and with so much freshmen talent, there’s bound to be at least a few newcomers making their debuts this season. Injuries or other unforeseen circumstances may push a few of these new faces into action, but others—whether by outplaying expectations in preseason camp or earning a spot at the expense of a more established player over the season—may get the greenlight based on what coaches feel gives the team a better chance to win games. It remains to be seen which freshmen will participate in games this season, though a few have already distinguished themselves with impressive performances in preseason camp.

Still, from our distant perch here in August, predicting who will have a discernible impact on the team’s performance this season is not easy. There are so many variables in play, some of which I mentioned above. In any case, we’ve come up with two players we believe will step in, learn the system and help NU compete on Saturdays this season. This exercise entails a wide margin of error: our players of choice may not see the field at all this season. This is simply our predictions for who seems best-equipped to contribute on gamedays this season. 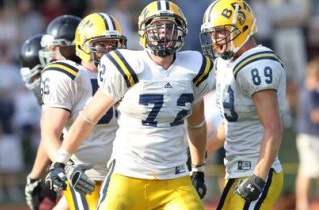 The lack of proven depth at tackle could enable Olson to make a big impact this season (Photo courtesy Scout. Com).

Outside of center Brandon Vitabile and left guard Brian Mulroe, the offensive line remains a breeding ground for position battles. It’s a fluid, ever-changing rotation, with different players rising up and down the depth chart throughout training camp. The competition has been intriguing to follow, and while nothing is set in stone, some positions appear closer to a conclusive outcome than others. Senior Patrick Ward, after 26 consecutive starts at right tackle, should transition nicely to the left side. The switch entails greater responsibility—protecting the quarterback’s blind side from the opposing team’s best pass rusher—but Ward should handle the new challenges deftly. At right tackle, former superback then guard Jack Konopka, has impressed coaches with his athleticism and footwork, traits amenable to the diverse array of blocking techniques and schemes at the position. Positional pecking orders are subject to change, particularly on this year’s constantly in-flux offensive line, but Konopka and Ward have emerged from a deep group.

Over the course of a long and grueling 12-game season, depth becomes paramount to any successful winning formula. Enter Olson: a 6-6, 285-pound tackle who chose NU over Boston College, Duke, Michigan and Virginia. During the team’s first week of practice in Kenosha (WI), Olson took reps with the first team offense. Of all the freshmen offensive linemen—a talented class that includes four-star guard Adam DePietro, three-star guard Ian Park and three-star tackle Kenton Playko—Olson has imposed himself in the most effective and noticeable way. He arrived in camp having added at least 10-15 pounds to his 6-6 frame, but without losing any of the athleticism that made him such an effective high school player. With quickness, strength and keen spatial awareness built in as baseline expectations, Olson has separated himself with superb blocking technique. He’s flashed the ability to stonewall bullrushes, slide to match speed charges and thwart crafty defensive ends with spin moves and arm rips. Olson engages opponents below pad level and provides strong leg drive, rarely giving up any ground.

That impressive skill set, plus an active and energetic approach to the game, has allowed Olson to compete on first-team drills. So far, he’s shared snaps with Konopka, sophomore Paul Jorgensen and senior Chuck Porcelli at right tackle (redshirt freshman Shane Mertz has not participated). Both Jorgensen and Porcelli are vying for the starting job, but the more plausible scenario involves backup roles, either at right or left tackle. Which leaves Olson squarely in the mix to land a spot on the two-deep, be it behind Konopka or Ward. From the looks of it, Olson could land a key backup job if he beats out one of the two aforementioned players. His chances, I’d wager, are better than decent.

Porcelli, at 6-7, 315 pounds, offers prototypical size plus the added bonus of four years working under coordinator Mick McCall. From a strength standpoint, Porcelli has no rival. Yet his skill set is too one-dimensional, too vulnerable to quick and crafty pass rushers with deceptive pass-rushing moves and speed bursts to get around the edge. Meanwhile, Jorgensen is an overall well-rounded blocker, with superb athletic ability and underrated strength. He played in 11 games last season and continually impressed coaches with his standout play in practices. Jorgensen may push Konopka for the starting spot at RT.

So while Olson may not challenge Jorgensen, he can certainly one-up Porcelli if he continues to thrive in preseason camp. Even at this early stage in his development, Olson offers the more intriguing all-around package and could prove crucial later in the season if injury troubles arise. Ultimately, the decision will come down to whether the immediate value of Olson’s services this season outweigh the potential long-term benefits—physical and mental maturation, learning the playbook in a stress-free environment, ensuring a smooth high school-college transition—of a redshirt year. Fitzgerald and staff may decide that Olson, an ultra-talented player with huge upside, would be better served sitting out this season and preserving his eligibility for four years of starterdom. That’s the conservative approach; Olson, true freshman though he may be, is physically and mentally ready to handle the rigors of Big Ten football. Porcelli, Jorgensen and Mertz, comprise a serviceable coterie of backup options. Olson’s addition would improve the group immensely. 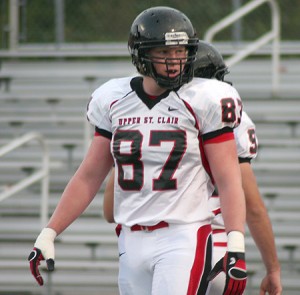 Jack Schwaba will give NU some much-needed depth at superback. (Photo courtesy Scout.com)

As far as position battles go, the superbacks have taken a backseat to the secondary and offensive line, as far as media coverage goes, that is. However, with very little experience returning and a lot of names in the mix, it's perhaps the most intriguing position battle, considering it may not be decided until well into the season. Expect NU to have some sort of committee at superback, which will include players with all different experience levels.

Junior Tim Riley, who had a touchdown catch at superback during the Meineke Car Care Bowl of Texas last year, seems primed to earn meaningful playing time this year and redshirt freshman Mark Szott, who many have forgotten about after he sat out last season, could also see the field a lot in 2012. However, all eyes this offseason were on the true freshmen coming in — Jack Schwaba and Dan Vitale.

Initially, I thought Vitale would redshirt to put on a little more size before he saw the field. However, Vitale has gotten some snaps during the fall and provides a threat at H-back and the versatility required at superback to make some contributions on the field this year. He could still end up redshirting, but I'd lean toward expecting him to see the field this year. While Vitale can make an impact for the inexperienced unit, his roommate and fellow freshman Jack Schwaba is the popular pick for biggest impact freshman.

Schwaba was a three-star recruit coming out of high school, but may have been NU's second or third most highly touted recruit given the need at superback. He's a "Y" (a traditional tight end) in the superback equation and he has the opportunity to compete of the starting job right away. While he likely won't be the starter at Syracuse — coach Pat Fitzgerald prefers to go with veterans, though Riley isn't much more experience at the position than Schwaba — he should be on the field at some point against the Orange and could eventually earn a starting job as the season progresses. Both freshmen received high praise from Riley, despite the battle for playing time:

"They’re good. They’re going to be good. Danny Vitale is a great athlete. Jack Schwaba, they’re gonna be good. Obviously they have to get experience and everything but they’ll be fine."

NU better hope both of their freshman superbacks are as good as Riley thinks they can be, because it's suddenly a major questions mark after three years of solid play from Drake Dunsmore. Schwaba can help fill the pass-catching void left by Dunsmore at superback, and while he's on a steep learning curve, he may be needed almost immediately when NU arrives at Syracuse.