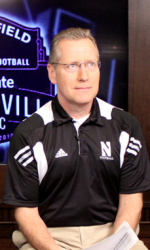 Dave Eanet has been a Northwestern football play-by-play announcer since 1990. (Photo courtesy NUSports.com)

Next up in our Q&A series is "Mr. Cat" Dave Eanet, the Northwestern play-by-play announcer for WGN. Eanet is a graduate of Northwestern and started rowing play-by-play of Wildcats football games for WBBN in 1990 (Fitz was still at Sandburg High School). After the 1995 season, Eanet moved to WGN and continued to do play-by-play of NU football games, in addition to being the voice of NU basketball. He is the sports director at WGN Radio in Chicago and often times serves as the sports anchor on the WGN-TV "News at Nine." In 2011, he was named the Illinois Sportscaster of the Year. Read more about Dave here and follow him on Twitter at @DaveEanet.

How has support for NU football changed since you started broadcasting games.

The difference in fan support is almost immeasurable.    I remember emceeing the NGN luncheons on Fridays before home games, and there would be a smattering of fans in a smallish room at Harry Caray's.  When Gary Barnett arrived, the interest picked up, partly because Gary was a  magnetic speaker  ( and a great coach) and people believed he could get it done.  But it wasn't till '95 that it exploded.  It's hard to explain how big NU Football became that year.    Still, I think now it's got a more solid foundation.   There were a lot of people jumping on the bandwagon in '95.  Now, I think there's more of a base.  And this "Chicago's Big Ten Team" campaign, and all the marketing, ---the game at Wrigley---have really increased awareness.    I think our support has grown immensely---partly because of the marketing campaign---and a consistently exciting product---and partly because of a dynamic and popular coach who bleeds purple.    The fact that sites like this exist is testimony to that.

How is fan support different from when you were in school compared to now?

Keep in mind, I was in school in the Stone Age.     To be honest, I never saw the effort on the part of the university to reach out to the student body, and come up with creative ways to get students to the games.  No one taught us the fight song. Then again, I don't know that "sports marketing" really existed.      The games were rarely on TV.  (No 11am kickoffs either.   I think all the games kicked at 1:00)

By the time I started doing the games, there were some efforts being made.  A young energetic guy named Don MacLachlan, who's been with the Tennesse Titans for many years, handled marketing, and tried to get the word out, and really hustled to get people to come out.

What is the most memorable game you've called?

There've been so many.   The Minnesota (Victory Right) and Michigan games in 2000 are right up there.  But really, any game in '95.  If I had to pick one, it was Penn State.  Sellout crowd at home, under the lights. National TV.   People on the rooftops on Central St because they couldn't get a ticket. Really the last step to silencing the skeptics. Still, there was nothing quite like walking into the Rose Bowl.

What position group needs to step up the most for NU to be successful this season?

I think it's got to be the D line.  With a youthful secondary, they're going to have to put pressure on opposing qb's.  I sense they'll be improved up front, and that's huge.   Not worried about the O line.  I think the coaches have generally done a good job reloading up front, when guys have moved on.   (The center position alone has been a good example in recent years.)

What player are you most excited to watch this year?

Can I pick three?  To answer the question,  Kain Colter, obviously.     But 2 other guys:  Venric Mark, who I believe will have a significant role in this offense, and Ibraheim Campbell, who's suddenly a veteran in the secondary.

Now that NU has been able to sustain bowl eligibility and .500 or above seasons, what will it take for the program to next step?

The easy answer would be to say facilities.  And I believe the forthcoming plan is critical to prolonged success.  But I really believe the program---the entire athletic program under Jim Phillips---is trending up.    With the talent Fitz is bringing in, and the support from the administration, I think they are really well-positioned going forward.   And yes, I DO believe that bowl victory is coming.