With Mark at Running Back Northwestern Has More Options on Offense

Share All sharing options for: With Mark at Running Back Northwestern Has More Options on Offense 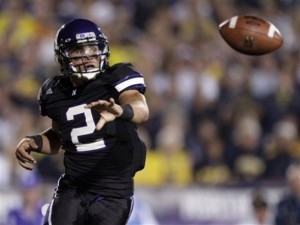 No Northwestern player has had a quicker rise up the depth chart than running back Venric Mark this fall. Mark said after the scrimmage that he and the other running backs were told by position coach Matt MacPherson that he would be the starter if the season had started Saturday. And while the kick/punt returner and former wide receiver downplayed his unexpected rise, it's quite remarkable considering the players he had to beat out to earn that spot.

After a number of troubling years at running back when the NU quarterbacks were actually the most effective rushers on the team, this year the Wildcats have some good depth at the position. Even before Mark joined the group, NU had Mike Trumpy, who was solid in 2010 and early in 2011 before tearing his AC, Treyvon Green, who had an impressive spring and was poised to take on a bigger role and true freshman Malin Jones, who many recruiting analysts thought could challenge for playing time right away. Mark figured to be at least fourth on the depth chart, behind those three.

However, Jones went down with dehydration on the first day of camp and has been banged up throughout, Green went to the hospital in the first week of camp and didn't practice in Kenosha and Trumpy is back, but hasn't gotten the same number of reps with the first team as Mark. That left Mark in prime position to claim the starting position.

Mark has always been a guy that the coaches want to find a way to get on the field because of his game-changing speed, but can't find a role. He's a natural fit to return kicks and punts, but could never establish himself as a consistent receiver. He played a number of different roles on offense, sometimes taking reverses and running outside, and even played linebacker for a few snaps against Michigan to try to contain speedy Wolverines quarterback Denard Robinson. However, his speed and versatility were always underutilized. Now, he has a chance to show his skills at running back.

With Mark at running back, the entire offense could undergo some interesting tweaks to accommodate his skill set. Obviously, at 5-foot-8, 175 pounds, Mark isn't going to be able to move any piles. He claims that his favorite play is running between the tackles —  "I’m a smaller back which means I can actually fit into smaller holes," he said. "It’s hard for a lot of linebackers to see me." However, he clearly won't be a power runner. What Mark can do, though, is something that he and quarterback Kain Colter have been working on in fall camp — the option.

Despite having running quarterbacks with Mike Kafka and Dan Persa, NU rarely ran the option because none of its running backs were speedsters like Mark. But now with Colter, possibly the Cats' most versatile quarterback ever, taking over as the full-time starter, and a quick, elusive player at running back, NU has all the tools it needs to make the option work.

"Option is something we have in our arsenal," Mark said. "Of course, you know, Kain is a versatile quarterback and me being a speed back, me and him, it fits well with both of us."

To be clear, Northwestern isn't going to turn into an option offense, so don't be expecting Georgia Tech when NU takes the field in Syracuse in a couple weeks. However, it's an effective tool that the Cats suddenly have the luxury to use and it provides a different look than opposing defenses — especially in the Big Ten — are used to seeing.

The option is just one part of this versatile offense that defenses will have to worry about. NU has arguable the best receiving corps in the Big Ten and it also has the personnel to power run when it needs to, with Trumpy and Green both serving as viable options for that duty. Add an option attack to that list, and there is virtually nothing that this offense doesn't have the potential to do effectively.

NU is known to be an up-tempo team, even in practice, and with speedsters at quarterback and running back in addition to an impressive air attack, this will be an extremely fast team in 2012.

"I can play a lot faster when I know the offensive concept," Mark said. "Instead of having to think about 'what do I have here, what to I have here,' if I just know it I can just run and react."

Run and react. Throw it deep. Run it up the middle.

NU has plenty of options this year on offense. And with Mark suddenly becoming part of the equation and adding a complimentary "option" attack to NU's offensive scheme, this new-look offense has a chance to be something special.