A day in Belgrade with Luka Mirkovic

Share All sharing options for: A day in Belgrade with Luka Mirkovic 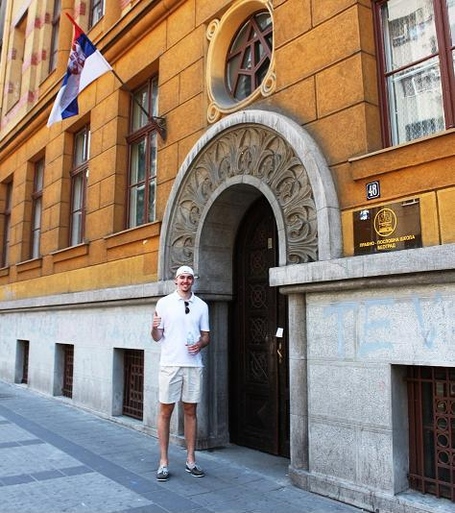 When you're trying to spot someone you've never met in a city you've never been to before, it helps when he's 6'11". So it was that I was able to find Luka Mirkovic in busy downtown Belgrade, Serbia, last month.

I'd been emailing back and forth with Luka for a couple of months, and when I had mentioned that I was going to be traveling in Serbia on vacation in July, he very graciously offered to show me and my wife around his hometown while he was home after graduation.

For more than three hours on a brutally hot day, Luka took us to all over Belgrade, visiting the old fortress that overlooks the city and several beautiful Serbian Orthodox churches, wandering through neighborhood streets and parks, and telling us about the legacies of war in the troubled region.

Luka was a great tour guide, and we had a good time talking about his life growing up in the former Yugoslavia, what it was like to move to the US, and his experiences playing basketball at NU.

Here are five facts you may not know about Luka Mirkovic:

1) When he left home to attend La Lumiere high school in Indiana for his senior year, it was the first time he had ever traveled outside of Serbia. He said he had never heard of Northwestern before coming to the US.

2) He plans to play professional basketball in Europe, having worked out for teams in his home country, with more tryouts scheduled in August in Poland and Greece.

3) Luka's father, Aleksandar, is a former professional water polo player, and his uncle on his mother's side, Zarko Koprivica, is a legend of Serbian basketball, having led the national team in several international competitions.

4) His younger sister, Ana, is a model. The two of them are close; he calls her "my best friend."

5) Luka was raised Serbian Orthodox but was not very religious growing up. Coming to Chicago, which has one of the most sizable populations of Serbs outside of Serbia, he rediscovered religion while attending Saint Basil Orthodox Church in Lake Forest. On one of his trips back to Belgrade during college, he decided to get baptized.

During our afternoon together, we didn't talk too much about last season, which as you all know, ended up with the Wildcats falling short of the NCAA tournament yet again. Beyond the team's failure, it wasn't a great senior year for Luka. He struggled at the start of Big Ten play, then got injured, and then was benched down the stretch by head coach Bill Carmody, who opted for a smaller lineup with John Shurna at center.

Luka did acknowledge that the pressure of making the tournament was felt intensely by the team and the coaching staff.

"It's all everybody would ask about," he said.

Eventually, to stay sane, he stopped reading newspapers and blogs, to get away from the negativity of jerk Internet commentators like us.

I got the sense that last season was something Luka didn't really want to dwell on, moving on from that phase of his life to the promise of a brighter future ahead. Though his senior stats weren't eye-catching, you can't teach height, and if he recaptures some of the spark he displayed his first three years and gains some consistency, he can have a decent pro career in Europe.

As for his college career, he said his greatest moment was beating No. 6 Purdue, 72-64, at Welsh-Ryan Arena in 2010, his sophomore year. Luka had a great game in that one, with 16 points and 10 rebounds, as the students rushed the court after the final buzzer.

The hardest opponent he ever played against, he said, is Jared Sullinger, no surprise. I think Luka still gets whistled for fouls against him, even from across the Atlantic.

Penn State, meanwhile, is the toughest team he played against. 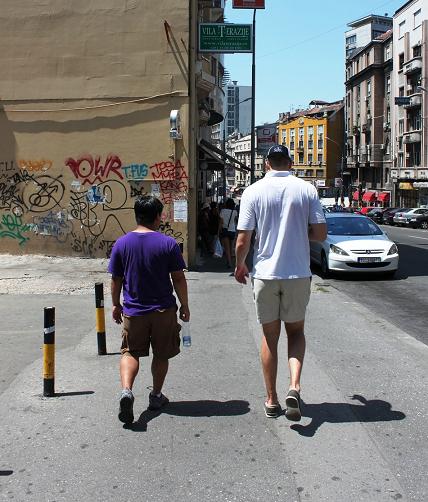 (Luka is the tall one, in case you were wondering)

Unlike a lot of US basketball players who have been playing on elite AAU and travel squads since middle school or earlier, Luka didn't start playing competitively until his sophomore year in high school, when his 6'4" frame made him hard for his local pro team's junior squad to ignore. But while he had the opportunity to turn pro after high school, he decided to take his talents to America.

It was academics, however, that were his main motivation.

"I knew a lot of guys who went pro after high school in Serbia, and after they got injured or got cut, they had nothing to fall back on," Luka said. "So I wanted to get a good education in the US, because you never know what can happen."

Luka attended La Lumiere, a small Catholic boarding school in La Porte, Indiana. There, he shone on the basketball court, averaging 25 points and 12 points, and earned scholarship offers from NU, Louisville, DePaul and Marquette. He was able to focus on his basketball in part because high school in the States was easy, compared to Serbia, even in his second language, he said.

In his first three years of high school in Belgrade, Luka had gone to a business/econ-focused high school, taking 15 classes each semester. (The photo at the top is Luka standing by his old high school.) At La Lumiere, he found the seven-course workload a breeze, and he compiled a 3.9 GPA.

For college, he chose NU for the academics and because of Chicago's large Serbian population, which helped assuage his cravings for Serbian comfort foods.

The transition to college was much tougher, and he called the fall quarter of his freshman year the roughest period of his life. In addition to the harder classes and competitive academic environment, he had to adjust to the more physical and faster brand of US basketball. There was also the loneliness of being so far away from home.

But he said that experience helped him become the person he is today.

"I'm a Serb, but I say that I became a man in the States," Luka said. "It's where I had my greatest successes and failures, both on and off the court."

"Most Americans I meet, they ask where I'm from, and when I say, ‘Serbia,' they think I'm from Siberia," he said. "And then they start asking me whether we have TVs or cars. I mean, come on, man! Serbia's not some hole in the middle of nowhere!"

He also embraced Chicago, becoming a White Sox fan -- "I just thought the Cubs' mascot was kinda girly," he explained. 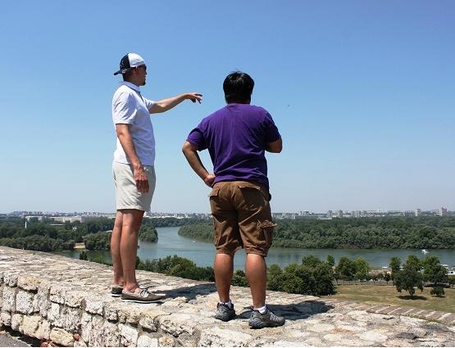 In the gym, he developed close friendships with his teammates, including Davide Curletti, his freshman-year roommate whom he called his tightest friend on the team. (Luka told me that Curletti has had some tryouts with Italian pro teams.)

If you know anything about the geopolitics of the Balkans and the former Yugoslavia, it's that Serbians and Croatians generally have not gotten along. The Bosnians factor into the tension, too. There's a whole history of mistrust, ethnic and religious strife, and nationalistic movements gone too far that are way beyond the scope of this blog post. You can read this interview Luka gave to Skip Myslenski to get an idea of what it was like to grow up with air raid sirens from NATO bombing attacks.

But with Peljusic, Luka said there were never any problems.

"My parents taught me to be open minded," Luka said. "So, I was brought up not to have any problems with Croatians or anybody. All this stuff about who's a Serb and who's Croatian, it didn't used to matter."

Peljusic, in fact, who was two years ahead of him, was his host when he was being recruited, and the two became good friends. Having someone to speak a common language with helped them form a bond. Serbian and Croatian are technically different languages, but they are extremely similar, more like different accents of the same language with some regional colloquialisms, Luka said -- "it's like you talking to someone from Alabama."

As we walked through downtown Belgrade, there are still reminders of Serbia's recent war-torn past. Bombed out buildings stand like skeletons in the middle of the city.

At the parliament building, Luka pointed out where protestors stormed legislators' offices and threw papers out of the windows, during the mass demonstrations in 2000 against Slobodan Milosevic, the war criminal who refused to abdicate as president.

Luka and his parents joined the demonstrations, too, marching and calling for Milosevic to step down. 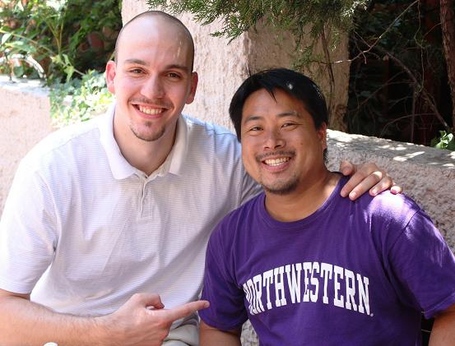 (Once a Wildcat, always a Wildcat)

Now, Serbia is still struggling to move from its socialist and totalitarian past to a new capitalistic future. Gone are many of the social services that the population depended on, but new are the opportunities for wealth and betterment.

You hear the word "transition" everywhere you go in Serbia, Luka said, and it leaves him with mixed feelings.

The lurch to capitalism has led to upheaval, with Serbia plagued by a 23% unemployment rate and growing. The gap between the rich and poor is widening, and inflation has hit hard. A bottle of water that used to sell for 20 Serbian dinar (about 22 cents) just a couple of years ago now goes for 50 dinar (about 52 cents), no big deal for you or me, but a potential hardship for a population that has an average salary of less than $500/month.

Belgrade is renowned internationally as a nightlife hotspot, with fashion-conscious youth partying at clubs until dawn, but the looks can be deceiving.

"You see a lot of young people dressed up really nice to go out, but most of them are poor," Luka said. "They make maybe 200 to 300 Euro a month. There's no middle class here."

Capitalism is the inevitable future, with wide-open possibilities for growth, he said, but that hasn't stopped many Serbians from reminiscing about the old days of socialism, when everybody had a job.

As for his own future, that's still to be determined. He expects to hear back from teams later this summer. He said he's completely healed from the leg injury that sidelined him for a chunk of his senior season, though he'll now always have to wear an ankle brace when he plays.

One of the things he appreciates most about his experience at NU was being able to see the US through basketball -- the tournaments in New York and Charleston and the game against Stanford in Palo Alto ranking among his most favorite road trips. He hopes a pro career can help him see more of the world.

Once his playing days are over, he said he's not sure whether he'll stay in Serbia or return to the US. He thinks he'd like go to into real estate development or law enforcement someday, but that's for later.

"I'm just going to be working out every day with my coach, and we'll see what happens," he said.