Leading up to the upcoming football season, Inside Northwestern will give you a brief profile of each of Northwestern’s opponents. During the season, you can expect a more in-depth preview of each game, including key matchups and more specific player analysis. This is simply a refresher for eager fans looking ahead to the fall. Look for this feature every Thursday. This week, we look at Minnesota. Click here for last week’s edition. 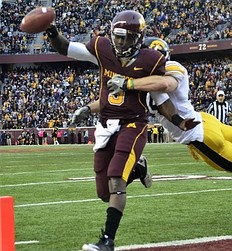 The Gophers need Gray to be the same dynamic playmaker he was last season (Photo courtesy Tom Olmscheid/AP Photo).

Ever since Minnesota won 10 games in 2003, the program has steadily trended downward. Longtime coach Glen Mason, who posted an encouraging 64-57 record over 10 years at the helm, was unceremoniously canned after blowing a 38-7 third-quarter lead against Texas Tech in the 2006 Insight Bowl, a game the Red Raiders would go on to win 44-41 in overtime. Former Denver Broncos tight ends coach Tim Brewster was hired to continue the positive momentum built under Mason. He led the Gophers to Insight Bowl appearances in 2008 and 2009, both losing efforts. After winning just one of its first seven games in 2010, Minnesota fired Brewster and replaced him with interim coach Jeff Horton, who led the Gophers to an encouraging 2-3 finish. Meanwhile, then-Northern Illinois coach Jerry Kill led the Huskies to a 10-3 record and an invitation to the Humanitarian Bowl, establishing himself as a hot candidate for vacant BCS coaching jobs along the way. The Gophers were convinced of Kill’s winning ways and proved as much when they announced his hiring on December 6, less than two weeks before NIU’s bowl game. Kill bolted for Minnesota without addressing his team, and many NIU players learned of his job switch through Twitter. To make matters worse for NIU, Kill brought along his offensive coordinator, defensive coordinator and special teams coordinator, creating massive instability in the Huskies’ coaching staff.

His first year at Minnesota, 2011, didn’t provide the immediate turnaround that Gophers fans had hoped for. The Gophers won just three games and two against league opponents. Perhaps the most noteworthy element about Kill’s first season in Minneapolis was his sideline collapse during Minnesota’s loss to New Mexico State. Kill had suffered seizures throughout his coaching career and was diagnosed with kidney cancer in 2005. Kill recovered and returned a week later in time to claim his first victory as Minnesota’s coach, a 29-23 home win over Miami of Ohio. With Kill recovering in just one week’s time and the Gophers claiming their first victory of a new coaching era, there were reasons for optimism as the conference season approached. But the Gophers dropped their next game against North Dakota State then lost their first three league games against Michigan, Purdue and Nebraska by a combined score of 144-31. They picked up their first conference win against Iowa on October 29 in a stunning, come-from-behind victory that saw the Gophers overcome an 11-point fourth quarter deficit. It was the second straight year Minnesota claimed the Floyd of Rosedale Bronze Pig trophy, given annually to the winner of the UM-UI rivalry game. The positive sentiment was short-lived for Kill’s upstart Gophers, as they quickly reverted to their losing form by dropping three consecutive games against Michigan State, Wisconsin and Northwestern. In its final game of the season, Minnesota rallied for a 27-7 win over Illinois, who lost its final six regular season contests.

While there was no visible spike in the Gophers’ win total during Kill’s first season, there were positive signs of encouragement. Quarterback Marquies Gray, a converted receiver, was a dynamic playmaker and on the whole one of the league’s toughest players to defend. Gray is a dual-threat quarterback in every sense of the term, as quick to launch deep passes as he is to spin, jump and scramble his way out of the pocket. There are plenty of dual-threat quaterbacks in the Big Ten—Kain Colter (NU), Nathan Scheelhaase (Illinois), Braxton Miller (Ohio State), Denard Robinson (Michigan), Tre Roberson (Indiana), Taylor Martinez (Nebraska)—but Gray may be the best pound-for-pound athlete of the group. He has the speed, agility and toughness of a receiver to go along with an imposing 6-4, 215-pound frame. Gray led the Gophers in rushing (966) and passing (1,495) yards last season despite having limited skill players around him. The defense was arguably the worst in the Big Ten, with glaring vulnerabilities in the secondary and along the line. The only true impact player on that side of the ball last season was outside linebacker Keanon Cooper. For Kill, the first year was about laying a foundation for success. Now that he’s learned the ins and outs of Big Ten coaching, perhaps the Gophers are poised for a breakout season. I don’t expect Minnesota to contend for a Legends division title any time soon, but once Kill can replenish the recruiting ranks and develop his young roster, the Gophers may have a chance to return to six-or-seven win territory.

To improve on last season’s three-win total, Minnesota needs Gray to continue his development as a passer despite having marginal talent at receiver, tight end and running back. Da’Jon McKnight, the Gophers’ leading receiver last season, graduated in the spring, meaning someone will need to step up and provide Gray with a reliable target. Incoming freshmen Jamel Harbison and Andre McDonald will challenge for major roles in the passing game, though senior Brandon Green will most fill the gap left by McKnight at the No. 1 receiver spot. Gray will shoulder the lion’s share of the running workload this season, with sophomore Donnell Kirkwood and juco transfer James Gillum providing solid options at tailback. The offensive line returns four starters, yet it is still an extremely inexperienced group.

Going by the numbers, this was the worst offense in the Big Ten; so there’s nowhere to go but up. The range and degree of improvement depends on Gray, and his ability to make plays with his arm and his legs. He is the most explosive, versatile and dangerous playmaker on this offense. The good news is that he will touch the ball on virtually every offensive play. Still, not even a player with Gray’s skill set can will his team to victory without some help. And the Gophers simply don’t have the talent around him to inspire fear in opposing defenses. If you can contain Gray and keep him from making plays outside the pocket, Minnesota will struggle to move the ball down field.

That’s easier said than done, and Iowa learned that lesson in demoralizing fashion last season. After his first-go-round in the Big Ten, Gray may find that opposing teams won’t look so dumbfounded when he breaks contain and scampers downfield. Defensive coordinators know how dangerous Gray can be, and how talent-bereft Minnesota is at the skill positions. They know that if they can shut down Gray, the offense will struggle to sustain drives for any significant stretch. Whenever you have a player whose individual performance essentially dictates his team’s overall performance, the best way to counter that dynamic, obviously, is by shutting down that one wholly instrumental player. Easier said than done, of course, but given Gray’s outsized role within the offense, and the lengths opposing teams will go to limit his productivity, he may regress somewhat this season.

With a year of Kill-apprenticeship, this Gray-led offense should improve, if not replicate last season’s production. Even with a glaring lack of offensive skill players, a well-grounded understanding of Kill’s offense and Gray’s role within that offense should lead to a more potent attack. The offense won’t rank among the league’s best, but it certainly should be better than last season’s league-worst outfit.

That Minnesota ranked 11th in the Big Ten in rushing defense last season with defensive tackles Anthony Jacobs and Brandon Kirksey—two starting defensive tackles who graduated this spring—in tow bodes poorly for their run-stuffing efforts this season. The hope is that Roland Johnson, a transfer from Butler County community college, can help fill the void and provide a disruptive presence in the trenches. The Gophers are also looking to improve by adding more speed at defensive end, and they will rely on redshirt freshman Thieren Cockran and sophomore Michale Amaefula to help in that regard. The Gophers managed only 19 sacks last season. An improved pass rush takes pressure off the entire defense by forcing opposing quarterbacks to make rash decisions and minimizing coverage time for the secondary.

While Cooper returns at outside linebacker, the Gophers lack depth in the middle. Senior Mike Rallis is the projected starter, but he struggled at times in 2011 and there is no proven back-up to fill in should those problems persist into this season. The secondary is perhaps the most glaring weakness on this defense. It must find a way to replace playmaking safety Kim Royston, who led the team with 123 tackles last season. The return of Troy Stoudermire, who played just four games last year before missing the final eight due to injury, means the Gophers will regain the veteran presence it so sorely missed last season. Stoudermire is a skilled corner who, despite his 5-10 frame, can matchup with the league’s best wideouts. His return promises an overall improved defensive backfield. Kill tabbed the juco transfer market for some much-needed secondary reinforcements, landing three players, including highly-touted cornerbacks Martez Shabazz and Michael Carter. Junior Brock Vereen thrived at cornerback last season, but will likely switch to safety this season, where his physicality and strong tackling discipline will provide help in run defense.

It’s unlikely there will be massive improvement on defense this season, but the incoming transfers could provide a new dynamic to a lackluster group. Stoudermire and Cooper are vocal leaders who command respect with their fiery and upbeat attitudes, and both should play inspired football in their farewell seasons with the Gophers. There are question marks at almost every position and a general lack of experience and depth. Defensive coordinator Tracy Claeys must infuse some energy into a middling group that looked uninspired throughout much of last season by promoting a hardworking and energetic atmosphere. Once Kill and Claeys can bring in players to fit their system, the Gophers should have the right parts in place to improve on this side of the ball.