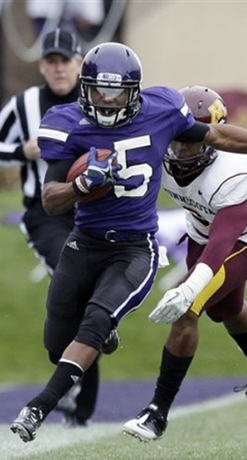 A 16-member selection committee will convene in December to select finalists before announcing the winner after the Bowl season. To get a better feel for what this award means, below you’ll find the official criteria (per the Hornung Award website):

To be eligible, a candidate must be in good standing and eligible on his team during the selection process, eligible with the NCAA during the selection process and play significant time during most or all of the season. Decisions regarding student-athlete status for the Award will be made by the LSC staff and Advisory Committee. In addition to starting or playing significant downs on offense or defense, candidates will be measured by performance from among one or more of the following:

This recognition is equal parts commendable and disappointing. Mark is without doubt one of the league’s best return men and, with 11 kick returns and 33 kickoff yards, will become Northwestern’s all-time leader in both categories. He provides a scoring threat every time he touches the ball and his long returns facilitate more favorable scoring opportunities for the offense. Which is all well and good, only Mark’s tantalizing skill set should not be limited to special teams, nor does his offensive output to this point match what's expected of a player with his talents. While he has improved as a receiver, Mark hasn’t shown enough consistency on offense to warrant a starting role. With his speed, quickness and elusiveness, Mark should demand touches on every possession. Yet offensive coordinator Mick McCall has been reluctant to use Mark because he hasn’t been able to channel his success from the return game into positive contributions on offense.

Midway through last season, Mark took on an increased role in the run game, an area which seemed a better fit for his size, skill set and instinctual running ability. It’s fair to ask why Mark wasn’t used more often as a running back earlier in his career. With players like Jeremy Ebert and Drake Dunsmore providing ample production as pass-catchers, perhaps Mark was never afforded an opportunity to prove himself. Or maybe he was miscast as a receiver in the first place. Given the shortage of talent and depth at running back, I expect Mark to have greater and more frequent opportunities this fall. If he can take the explosiveness and fearlessness exhibited on every kick and punt return and apply it to handoffs, slip-screens and end-arounds, Mark should thrive.

If Mark can emerge as a major playmaker on offense this season, with the baseline expectation of flashy, highlight reel-worthy returns, he may have a chance to win the award. After all, it’s about versatility. A strong offensive campaign to go along with stellar special teams play would certainly qualify in that sense. That said, NU probably needs to keep itself in the Leaders Division title hunt for much of the season to give Mark a legitimate shot at winning the award. These trophies, for better or worse, depend as much on team win totals and national recognition as much as they do individual performance. So yes, Mark holds a punchers chance, provided he has the breakout season on offense many expected from a year ago. The more realistic goal involves improvement within the confines of McCall’s offense plus a minor boost in return yardage. Oh, a few touchdowns would help, too.