Share All sharing options for: Football Unit Rankings: No. 9, Superback

We start things off with No. 9: Superbacks 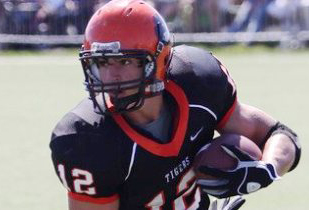 For such a unique position, NU has enlisted a diverse and talented group. Riley, despite switching from linebacker just last season, showed promise in the Meineke Car Care Bowl with an impressive two-yard touchdown catch in the fourth quarter. He has great hands, above-average speed and an all-around well-grounded understanding of the position. While it’s still unclear exactly how coordinator Mick McCall will deploy Riley in specific situations this season, he’s a dynamic player capable of handling a wide array of assignments and responsibilities, including downfield blocking, pass catching and helping protect quarterback Kain Colter.

The two true freshmen have outplayed expectations in preseason camp, with both Vitale and Schwaba challenging for the starting job. Vitale brings elite athleticism and great toughness, while Schwaba is the more refined pass catcher. They offer different skill sets and physical talents, and both could contribute in their own unique way. Vitale currently holds a considerable advantage over Schwaba, and it’s unlikely that both players will see the field this season. Meanwhile, Szott is the biggest of the superback challengers, and after a year learning his position, is ready to step in and compete for the starting job. He made significant strides on scout team last season and has shown excellent route running and pass-catching ability in camp.

There are four disparate challengers, each with a different physical and mental make-up. Szott is a precise route runner and rarely drops passes. Vitale is a breathtaking athlete with a relentless work ethic and upbeat, energetic personality. Schwaba is a powerful blocker and an experienced tight end. Riley brings experience and an unmistakable grit and toughness that complements a great set of pass-catching and blocking skills. While no one has distanced himself from the competition, it’s unlikely coach Fitzgerald and his staff will elect one player for the position. The more plausible scenario involves a by-committee approach, with several players contributing in specific situations. There’s no shining star within this group, but collectively, the talent and depth is intriguing. The freshmen will continue to improve as the season progresses, with Riley and Szott helping them along the way. The competition should push everyone to get better, and the end result could be a strong and cohesive group, albeit relatively underrated.

No one mastered the various roles and responsibilities of the superback position at NU quite like Drake Dunsmore. He consistently ranked among the Big Ten’s top receiving tight ends while continually opening up space for his fellow receivers and running backs with key blocks. Dunsmore was a unique player with a favorable physical profile (6-3, 225) to go along with fine-tuned offensive skills and a high football IQ. It wasn’t just his receiving totals that made Dunsmore such an important player. It was his contributions in other areas, particularly the dirty work in the trenches that doesn’t show up on box scores.

The dropoff at his former position is inevitable. NU’s replacement effort features an eclectic mix of former tight ends, defensive backs and linebackers, none of whom are ready to step in and contribute in the same way Dunsmore did. That’s a high bar to meet, but it’s unlikely any member of this year’s superback contingent will even come close to what Dunsmore accomplished last season. For all the depth and talent and intrigue within this year’s group, the lack of real live game experience is startling, not to mention the lack of experience at the position. Only Szott and Schwaba have played tight end for any significant stretch, but it remains to be seen whether they can handle the rigors of Big Ten football, never mind the high-demands of the unique position they’ve chosen to embrace.

The group, as a whole, can contribute in different ways and different areas of the game, but no one has emerged as the type of complete and well-rounded blocking-receiving force that’s capable of adequately handling the multi-purpose position. Perhaps Szott, Schwaba, Vitale or Riley will improve in those key areas and seize the starting job, but from the looks of it, the superback position will be a ongoing work in progress, with several participants each pitching in at different points of the season. With a handful of players challenging for the starting spot, depth will be a key component of this year’s superback formula, and that’s encouraging. But without a clear leader, someone to step in and at least reasonably approach Dunsmore’s production, the prognosis is dim. With so little in the way of proven talent, a marginal role for the superbacks within McCall’s offense is a logical conjecture.