Leading up to the upcoming football season, Inside Northwestern will give you a brief profile of each of Northwestern’s opponents. During the season, you can expect a more in-depth preview of each game, including key matchups and more specific player analysis. This is simply a refresher for eager fans looking ahead to the fall. This week, we look at Michigan. Click here for last week’s edition. 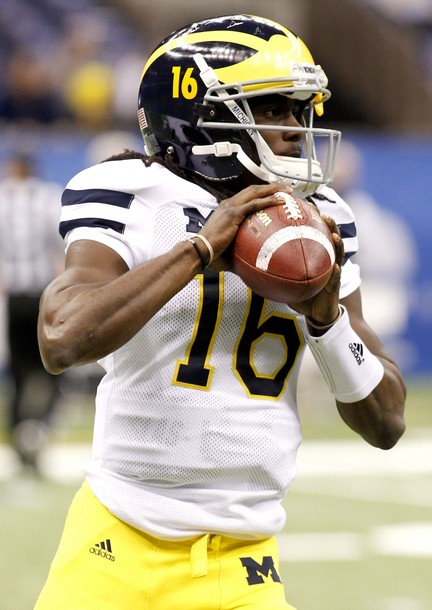 If Robinson makes strides as a passer, the Wolverines could suit up one of the Big Ten's most explosive offenses (Photo courtesy Jonathan Bachman/REUTERS).

It’s hard to remember that just two years ago—before Michigan won 11 games en route to a BCS bowl game—the Wolverines were still trying to figure out whether or not to go forward with coach Rich Rodriguez and his spread offense. Over three seasons, the former West Virginia head man led Michigan to two losing seasons and just o

ne postseason birth, where it fell 52-14 to Mississippi State in the 2010 Gator Bowl. Rodriguez was fired after that throttling, his composite record an unacceptable 15-22 at the time of this dismissal. The next move for athletic director Dave Brandon was finding a “Michigan man” to restore the Wolverines’ lofty status among the college football elite. After whiffing on high-profile candidates Jim Harbaugh and Les Miles, Brandon settled on Brady Hoke, who beforehand oversaw a five-win improvement from 2009 to 2010 at San Diego State. While he never attended Michigan, Hoke was a defensive line assistant at the program for seven years. The hire was well-received, a change in leadership promising a return to normalcy. Hoke also brought in an impressive staff, including offensive coordinator and pro-style guru Al Borges as well as Greg Mattison, who previously served as defensive coordinator of the Baltimore Ravens before inheriting the same position in Ann Arbor.With a revamped coaching staff, the Wolverines expected immediate improvements. At Michigan, there is no such thing as a “transition year” or a “rebuilding” period. Hoke managed to conquer that pressure and exceed th

ose outsized expectations.  His success was just as important for recruiting and competitive reasons as it was symbolic ones. After three years of Big Ten irrelevance, the Wolverines had finally regained their status atop the Big Ten power structure and just in time for rival Ohio State’s anticipated rise under Urban Meyer. With Hoke and his new staff’s no-nonsense philosophy, Michigan won 11 games and took down No. 11 Virginia Tech in the Sugar Bowl. The two losses—at Michigan State (28-24) and at Iowa (24-16)—came during a three-week span from mid-October to early November, but the Wolverines regrouped to win their final three conference games, including “The Game” against the Buckeyes, which snapped a seven-game losing streak in the rivalry.As expected, there was noted shift towards a pro-style model in last year’s offense. But even with the influx of new coaches and new philosophies, various elements of Rodriguez’ spread were left intact. It was a smart move, all things considered. The Wolverines had one of the most dynamic dual-threat quarterbacks in the nation—Denard Robinson—running the show, and given his success in Rodriguez’ system the previous two years, it only made sense to employ an offense that maximized Robinson’s unique talents. With explosive playmakers like running back Fitzgerald Toussaint and receiver Junior Hemingway at his disposal, Robinson submitted another stellar season. But the biggest improvement was on the defensive side of the ball, where Mattison—who successfully overhauled the Wolverines’ previously feeble unit—accomplished what Rodriguez’ coordinators could not. Michigan finished second in the Big Ten in scoring defense (17.4 ppg) and fourth in total defense (322.2 yards per game). That remarkable transformation—In 2010, Michigan gave up an average of 35.2 points and 450.8 yards per game in conference play—stands as the primary cause for their four-win jump.

All in all, the first year assessment of Hoke’s work in Ann Arbor is glowingly positive. Inheriting a new roster, stuffed to the gills with Rodriguez’ recruits, made Hoke’s first-year transition a difficult one, but he used the existing talent—ill-suited to his pro-style philosophy though it was—to find immediate success at a program where one bad season prompts “hot seat” talk and enormous pressure surrounds every decisision, play call and outcome. That’s impressive, because few coaches can handle that type of pressure. The next challenge is ensuring that 2011 was less a blip than a sign that Michigan has officially regained its status as an perennial Big Ten and national championship contender.

One of the issues with switching to a pro-style system—a conventional scheme better-suited to traditional pocket-passing quarterbacks—is Robinson’s poor throwing accuracy. Despite being one of the nation’s best playmakers (and a surefire Heisman candidate), Robinson is not by any stretch of the imagination one of its most accurate passers. Last season, he threw 20 touchdowns and 15 interceptions, a startling ratio for any quarterback, never mind an All-America type like Robinson. Fortunately for the Wolverines, the limited group—Michigan denied media access to all spring practices—able to watch Robinson this spring couldn’t help but praise his improved accuracy, arm strength and command of the offense. After a year of Borges apprenticeship, it stands to reason that Robinson should take well to the Wolverines hybridized offense. If his accuracy remains suspect, his throws erratic, Robinson can still be a dominant player in this offense. He’s one of the Big Ten’s fastest players, a dangerous runner when breaking contain and moving upfield.

Contrary to Borges’ wishes, the offense may require a stronger spread flavor than last season. After losing two of its top four receivers from last season—tight end Kevin Koger and wideout Junior Hemingway—the Wolverines will rely on Jeremy Gallon and Roy Roundtree, who combined for just 50 receptions in 2011, to pick up the slack. Both are talented players, but it remains to be seen who will emerge as the true No. 1 receiver. Roundtree, after a breakout season in 2010 in which he totaled 72 receptions and 935 yards, finished with just 32 receptions and 434 yards last season. And Gallon, while immensely talented, has but one year of appreciable productivity to his name. If Gallon can pick up where he left off last season and Roundtree can recall his 2010 form, then Robinson should be well-positioned to flaunt his improved throwing accuracy. If not, Borges may be forced to dial up more running plays, which will allow opposing defenses to stack the box and limit Robinson and star back Toussaint (the junior tailback was charged with DUI in July and suspended from the team shortly thereafter, but he should return in time for the season.)

The good news is that Michigan returns one of the league’s best offensive lines, led by future first-round pick Taylor Lewan at left tackle and Michael Schofield, who should make a smooth transition from left guard to right tackle. The massive line will facilitate an effective run game and a strong protective buffer for Robinson to improvise when plays break down. If opposing defenses can’t get to Robinson, it’s only a matter of time before the dreadlocked dynamo breaks games open with long and dazzling highlight-reel plays. The offense should finish among the league’s best by season’s end, especially if Robinson’s rumored passing improvements enable a diversified offense with a greater emphasis on pass plays. Robinson can outrun pretty much any defender he will face this season. If he can compliment that established weapon with elevated arm talent, Michigan’s offense could border on unstoppable.

The Mattison progression should reap greater rewards in year two despite great turnover along the defensive line. The Wolverines lose three starters to graduation, including star tackle Mike Martin and end Ryan Van Bergen, but talent remains at both positions. All-Big Ten honoree Craig Roh is a fierce pass rusher and effective run-stuffer with underrated quickness for his size (6-5, 281 pounds). The other end spot should be occupied by sophomore Frank Clark, who recorded an impressive interception in the Wolverines’ Sugar Bowl victory last season. Clark was charged with second-degree home invasion, a felony, earlier this summer. Sophomore Brennan Breyer will likely take his spot if Clark’s legal troubles hinder his preseason preparation to any significant degree. On the inside, former highly-touted recruit Will Campbell, who was arrested in the spring for sliding over the hood of a car while intoxicated, will get the nod at nose tackle, with junior Jibreel Black serving as a fantastic complement. Last season, the d-line dominated the line of scrimmage and limited opponents to just 131.7 rush yards per game, good for third among Big Ten teams. Stopping the run is the key to any successful defense, and if the Wolverines can reprise last year’s performance, the largely remolded group should flourish.

While the line is a deep and talented group, the strength of this year’s defense lies in the back seven. Three starters return at linebacker, including fifth-year senior Kenny Demens, an indomitable force at the heart of the Wolverines’ defensive plans who led the team with 94 tackles last season. Flanking him is sophomores Jake Ryan and Desmond Morgan, both of whom flashed great potential last season and should continue their collective ascendancy with a better overall understanding of Mattison’s system. Another player to watch is junior Cam Gordon, who should see major playing time on the outside.

The continuity extends to the defensive backfield, where everyone returns from a unit that underwent a remarkable resurgence in Mattison’s first season. That upward trajectory continued into bowl season, where it limited NFL-bound Hokies quarterback Logan Thomas to 214 yards and zero touchdowns, and throughout spring workouts. Safeties Thomas Gordon and Jordan Kovacs have been around long enough to remember the nightmarish days of Rodriguez’ defensive failures, when opposing teams moved the ball with little resistance and the former coach couldn’t find a solid fix. They endured the criticism and now front a stronger and deeper secondary that marks one of the team’s strengths, and not its most glaring vulnerability, as was the case under Rodriguez. Where the DB depth truly shines through is at cornerback, with senior J.T. Floyd and rising star Blake Countess providing lockdown one-on-one coverage. Juniors Courtney Avery and Terrence Talbott will play key reserve roles. And for good measure, the Wolverines can mix in true freshman Terry Richardson, the crown jewel of its 2012 recruiting haul.

The one potential pitfall here is the line, which—for all its talent and recent improvement—will probably suffer early growing pains. In most years, that’s not a huge concern. But the Wolverines face a stern test on September. 1 in defending national champion Alabama, who features a stable of powerful backs along with one of the best offensive lines in the country. If Michigan can figure it out in the trenches and put its legal troubles aside, the defense should play to last year’s level, with the possibility of slight improvement given the experience and talent in the back seven. Conventional wisdom dictates that Madison’s teachings will seep their way into his player’s pores, that his wisdom will prompt a collective improvement. If his underlying philosophy works to greater effect this season, the Wolverines, despite a few key losses along the line, could again field a formidable unit.