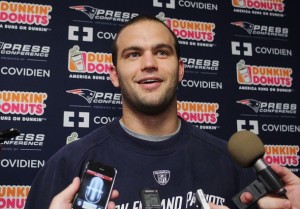 Jeremy Ebert was drafted by the New England Patriots in the seventh round of the 2012 NFL Draft, thanks in large part to the workouts he received at TCBOOST. (Photo courtesy Jim Rogash/Getty Images)

Even while he was still a player at Northwestern, Tommy Christian was a coach.

“I started at Mike linebacker my junior year and then that next year I was (out with injury) so I was kind of like (a graduate assistant) my senior year,” he said.

And nearly two decades later, with some twists and turns along the way, he is still a coach and, indirectly, still finding a way to help out his Wildcats.

Christian is the owner of TCBOOST, where he works with his brother, Bob, as a strength and conditioning coach for athletes from the high school level to the NFL. While the Christians have worked with athletes from all over the country, the training center has become a hot spot for Northwestern athletes preparing for the NFL Draft.

“Jeremy Ebert, Brian Peters, Jack DiNardo, and Jordan Mabin trained with us (this past year),” Tommy said. “The year before, Corbin Bryant, Quentin Davie, so most of them do.”

While NU players provide the biggest group of draft hopefuls, TCBOOST has also worked with players from Nebraska, Auburn, Colorado, Northern Illinois, Notre Dame, Illinois and Michigan State. Other clients include the entire offensive line of the Chicago Bears. However, while TCBOOST has had success stories from players at many institutions, the Christians’ work with NU players is special.

“I’m a Wildcat,” Bob said. “I take a lot of pride in my school and I want their success.”

After his playing days at Northwestern were over, Tommy Christian left football to use his degree and pursue a career designing cars in the auto industry for five years in Detroit.

“I found out that wasn’t what I wanted to do,” he said. “I liked engineering, I was always drawn to that, but sports were always a big part of my life and I always thought if engineering wasn’t something long-term for me I’d always be interested in coaching. I had an interest specifically in strength and conditioning.”

After his five-year hiatus from football, Christian returned to Northwestern as the Wildcats’ assistant strength coach from 2000 to 2002. After that stint, he joined Brian Musso, who also played at Northwestern, to start a company called Accelerated Athletics. However, he still stayed affiliated with NU.

“After I left, the football staff and strength staff asked if I would still be willing to do the speed development work with the football team on a contract basis, which I was excited to do,” Christian said. “I was still doing all the speed development work for Northwestern’s football team. At first it was just on a limited basis, but pretty quickly it became all the workouts in the spring, the winter, the summer and even during (the) season.”

In 2006, when Musso left to pursue other things, Christian bought out the company and formed TCBOOST. He was joined by Bob in 2007 and opened the current facility, located in Northbrook, Illinois, in 2008.

Bob is also a former Northwestern player. He was a running back at NU from 1987 to 1990 and then, after being drafted by the Atlanta Falcons, played three years for the Bears, two for the Carolina Panthers and then six for the Falcons, switching from running back to fullback after this first year with the Bears.

With so much playing and coaching experience in college and the NFL, the Christians have made the perfect team for aspiring NFL athletes.

“They put a great product out there,” said former NU wide receiver and current New England Patriot Jeremy Ebert. “They’re professionals, they know what they’re doing and they show results.”

Tommy began working with Northwestern in 2000, and despite leaving that position in 2002, he was a “consultant,” working with NU players in the offseason after that. Through that job, he and got to know the players at NU and they also became close with current strength and conditioning coach Jay Hooten. That familiarity has led to many NU players choosing to work out at TCBOOST after they graduate, and Hooten has recommended to players that they continue to work out with the Christians in their NFL Draft preparation.

“They had a lot of past Northwestern clients that did really well and I got a lot of feedback from them,” Ebert said.

For Bob, being able to help the program even after players leave the program is one of the best parts of the job.

“It’s rewarding,” he said. “It’s one thing that they have to train with us during the offseason when we were kind of employed by the club, but then it’s rewarding when they have the choice and they choose us. But they understand we care about them the most, we know them the most and we’ve had great results.”

That familiarity, however, has decreased over the past year, as the Christians were forced to end their role as consultants to NU.

“There was an NCAA rule change that was a result primarily with the Michigan violations with Rich (Rodriguez),” Tommy said. “I don’t know the whole details, but I think they were using their strength staff as football coaches, so the NCAA said there was going to be a limit on how many strength coaches can touch football and the limit is five coaches. When we do speed work there was often times two, sometimes three of us that would come over to Northwestern to run the speed workouts, so we would count against that, which would limit them to only two strength coaches in the weight room, counting (graduate assistants) and everything else.”

This past offseason was the first one that the Christians did not work with NU since the early 2000s. While they never broke the NCAA rules — they ran strength and conditioning workouts, not football practices — they still paid the price.

“Unfortunately what so often happens is people bend the rules, abuse the rules and the people who always obey the rules suffer,” Bob said. “And Northwestern has always been a place where we always obey the rules, so we pay for the abuses of Rich Rodriguez. Especially Tommy and I, we play specifically. But that’s life; you can’t be bitter and dwell on things like that.”

While the Christians don’t want to be bitter — Tommy focused on the positives they brought to the program during their time working with the team — they, not surprisingly, don’t support the rule change.

“We’re really disappointed in the rule, obviously,” Tommy said. “We really valued the 11 years that we were doing the speed work with Northwestern. It was a good run. And during that time the team had a lot of improvements and we went to a lot of bowl games in that time period, and if we had an opportunity to continue to work with the team, we would.” 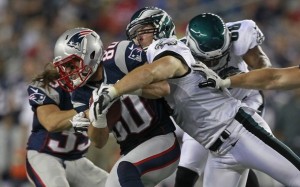 “It’s a different world out there (in the NFL)," Ebert said. "Guys are bigger, faster, stronger and TCBOOST has allowed me to grow and physically mature and work on my speed so I could compete with the best of the best.” (Photo courtesy Steven Senne/AP Photo)

Preparing for the draft

Jeremy Ebert turned a lot of heads during his playing days at Northwestern, but one of the accomplishments that got him the most attention came after his senior season, at Northwestern’s pro day.

Ebert ran a 4.38-second 40-yard dash at the pro day, and despite not being invited to the NFL Combine, was drafted in the seventh round of the 2012 NFL Draft by the New England Patriots. Had it not been for TCBOOST, Ebert may not have made it to New England.

“I knew I had some speed, I just didn’t know the right techniques, the running forms,” he said. “I started off and I was running horrible times and every day we came in and worked on that and it showed up on pro day. All the credit goes to them. They did all that. They helped me to where I was able to run a sub-4.4-40.”

That “horrible time” was a 4.68-second 40 in January, according to Tommy. It took three months of training, but that new time could be valuable beyond draft day.

The stigma associated with the NFL in recent years has been the importance of the 40 time and combine workouts. However, Tommy said that’s a misconception.

“I’ve been told by scouts the combine and pro day is like 10 percent of the picture,” he said. “90 percent is what they’ve already done on the field.”

However, Tommy didn’t deny the important of the 40 time, particularly to players who are on the cusp of getting drafted. Once a player has finished his college career and has begun to prepare for the draft, improving his 40 time is the best thing he can do for his draft stock.

“If you’re on the bubble of not even getting an opportunity and you run a 4.3-40, now you have a chance, you’re in a training camp, or maybe you even get drafted like Jeremy, where he’s going to have a much greater opportunity,” Tommy said. “Everything else is kind of secondary to the 40. You have seven or eight weeks to make somebody faster in 40 yards.”

With so much emphasis placed on the 40, TCBOOST is a good fit for athletes preparing for the draft, since their focus is speed development.

TCBOOST's size also makes it a desirable place for athletes to train. While some training hot spots have “50 or 60” clients, TCBOOST typically has anywhere from six to 15 players, depending on the year, working with five coaches. That allows for a much more personalized experience.

“I think it’s important because the process is pretty individualized in terms of understanding each player, what their issues are mechanics-wise or wherever their weaknesses are, and if you can address, zero in on what someone’s specific deficiency is that’s like the biggest area of improvement you’re going to be able to capitalize on, and you only have seven or eight weeks,” Tommy said, “you really need to focus on what’s going to get them to, most importantly, improve their 40 time.”

Other training centers can’t offer that kind of individualized approach, but some players prefer to work out at big name training facilities.

“I think a lot of times as players are looking at going to the next level, they’re attracted to going to Florida or California or high profile places, but the reality, is if you go to a place that has 50 or 60 guys that they’re training for the draft and you’re not a marquee player, like you’re not going to get their best effort, and everybody that comes here we give our best effort, our whole staff,” Tommy said.

“We have great results and outcomes in terms of measurable improvements, in terms of 40 time reductions, vertical jump improvements, and really, that’s all that matters; where you train for the draft doesn’t matter. If you trained at the same place Michael Vick trained at, or back in the day, Deion Sanders — those guys were going to be first round picks anyways; they were fast anyways.”

Results. That’s what TCBOOST has offered Northwestern players over the past 11 years — those at NU and those preparing for the draft — and the results are why Ebert decided to train there and ended up in the NFL.

“Everyone that goes there, they increase what they need to get ready for the pro day and stuff like that,” he said. “It’s a different world out there (in the NFL). Guys are bigger, faster, stronger and TCBOOST has allowed me to grow and physically mature and work on my speed so I could compete with the best of the best and I think that’s what the NFL’s all about — you’re playing the best of the best. TCBOOST really allowed me to get up there and be able to play with those guys.”