Share All sharing options for: Football Unit Rankings: No. 8, Secondary

Today we look at No. 8: Secondary 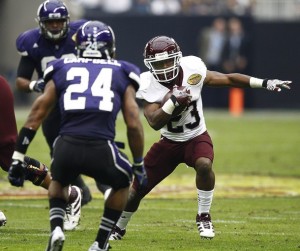 The most obvious strength in the secondary is safety Ibraheim Campbell, a sophomore who started last year as a redshirt freshman. He had some coverage breakdowns and made some freshman mistakes, but he also had 100 tackles and was a hard-hitter. As the season progressed, he improved, and now he'll be called upon as the veteran of the unit. Campbell certainly has the potential to make some All-Big Ten lists, and if he continues to make the big hits and force turnovers, he will give the secondary at least one stable area in 2012.

The rest of the secondary is very young, but it's not necessarily a big weakness to start over, as last year's unit was terrible and this year provides a chance for a fresh start. Nick VanHoose has been the biggest riser up the depth chart in the secondary since last season, breaking out in the spring and grabbing a starting spot this fall. While he was considered a front-runner following the spring, it's was a mild surprise that he was held out of NU's scrimmage on Saturday — typically a sign that a player is a lock to start — and the coaches clearly have confidence in him, even though he has never played a down of college football.

The depth for this year is also better than last season. Last year, after Jordan Mabin was hurt against Michigan State, NU was forced to put Daniel Jones into the game in his place. Jones was lit up by the Spartans' offense and was clearly not ready to play in the Big Ten. This year, however, NU's backups should be better off. Evans is a fifth-year senior transfer from Stanford, while Hall still has a chance to win the starting job. Jones should be improved from last year, as well. Overall, the secondary is inexperienced, but if it can get things together and avoid freshman mistakes like giving up big plays, it could be better than last year.

On paper, this doesn't look good: NU was terrible in coverage last season and loses its two best players. The loss of Jordan Mabin and Brian Peters means this year's secondary will be very young and very inexperienced — keep in mind that, at this time last year, this year's "veteran," Ibraheim Campbell, had never played a down of college football. That's going to mean a lot of freshman mistakes and some adjusting in the early going.

NU's biggest Achilles heal in the secondary last year was giving up big plays, and with so many young guys this year, that figures to be a problem early on. The unit should figure things out down the stretch, but by then, it may be too late. NU needs to jump out early and win games in the non-conference season and early in the conference season because the schedule is soft then. However, if the secondary can't put things together by then and there are a couple of bad losses, the Wildcats could finish with a disappointing record, as the latter half of the schedule is brutal and those games will be tough even if the secondary is in good shape.

The third weakness — well, question — is whether the new guys in the secondary are actually that good. Campbell is a proven player, but the others are still unproven. VanHoose, in particular, has performed well in practice, but it's a whole new ballgame when he steps on the field against Syracuse on September 1. Dugar has some playing experience, but wasn't great in his past performances and Fleming is unproven, as well. If the secondary can't live up to the hype and build on the progress it has made in the offseason it could be another rough season for the Cats' pass defense.