Today we look at No. 7: Offensive line 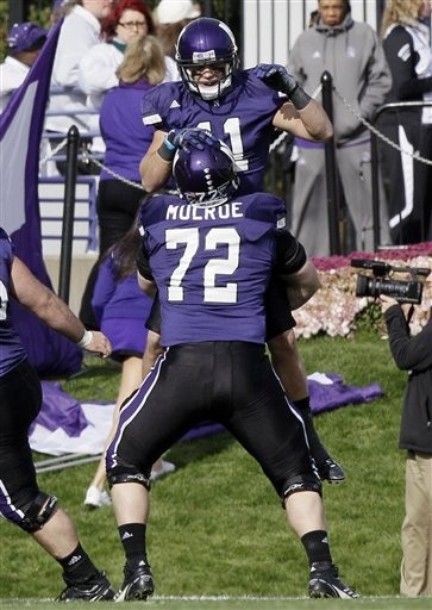 Without Burkett and Netter, the offensive line needs Mulroe to emerge as a leader (Photo courtesy Nam Y. Huh/AP Photo).

The competition over spring practice and preseason camp has led to some unexpected depth chart movement, in particular on the right side of the line. One of the biggest surprises is Matt Frazier, who most anticipated would return from a strong redshirt year to backup center Brandon Vitabile. Frazier exceeded expectations in camp and beat out his competitors in Kenosha with a strong week of consistent performance. A tough blocker on the interior, Frazier should help NU holds its ground in the trenches. Seniors Neal Deiters and Chuck Porcelli, two behemoth linemen, will play meaningful reserve snaps this season and the prospect remains that one of them could take over should Frazier struggle in his first year as the starter. Whatever the outcome, the competition will push Frazier to improve his game; likewise with Porcelli and Deiters, both of whom are determined to finish off a strong career at NU. The pecking order at right tackle is the result of another unforeseen roster move. After playing superback in the fall and guard in the spring, Jack Konopka moved to tackle, where his athleticism and quick feet have put him in strong position to win the starting job. He’s being challenged by sophomore Paul Jorgensen and redshirt freshman Shane Mertz, two immensely talented players with bright futures. All three can handle the rigors of the position, but so far Konopka has separated himself from the competition.

While the right side of the line is largely rebuilt, the left side (including Vitabile) returns three starters. The leader of the group is Brian Mulroe, a senior who’s spent the last two seasons developing a reputation as one of the league’s stronger interior blockers. His vocal presence is critical to the line’s overall success. Left tackle Patrick Ward brings prototypical size at 6-7, 310 pounds with superb athleticism and a high football IQ. Perhaps the most talented of the group is Vitabile, who after winning the starting job last season was named to the preseason Rimington watch list. His ability to identify blitzes and call out protection schemes will dictate how this unit performs against opposing defensive lines.

When the starting spots eventually sort themselves out, the next challenge is assimilating the newcomers with established veterans. Mulroe will oversee this process, but it will be a collective effort, one requiring everyone to embrace the line’s philosophy and group strategy. The right side, while lacking experience, is talented and has proven its worth throughout the spring and in camp. Konopka and Frazier should fit in nicely alongside Vitabile, Mulroe and Ward. From the looks of it, the pieces should fit. Now it’s a matter of putting everything together.

Neither Frazier nor Konopka has played a down of Big Ten football at their respective positions. That counts as a major concern, particularly when the line is in dire need of some stability after allowing 43 sacks last season, which ranked 11th in the Big Ten. Mogus is a skilled player with great upside, but it remains unclear whether he can carry his prowess on the practice field onto the big stage, where every mistake is magnified. And Konopka, for all his athleticism and natural toughness, is still somewhat raw, technique-wise. He’s made significant strides, yet it’s nonetheless troubling that Konopka is just learning his position. The talent is there, but both players will need to harness their potential this season. That’s a short timetable for development. Mogus and Konopka will be successful players; the question is whether they can reach peak performance this season.

Last year’s line struggled against athletic pass rushers and was constantly overpowered at the point of attack, but losing Al Netter and Benn Burkett—two four year starters—is a legitimate concern, even if Ward and Mulroe and Vitabile offer a combined five years of starting experience. That loss of continuity will hurt this group in more ways than one. Netter was an All-conference level player, a blocking tactician with great intangibles. He was also the line’s leader, both vocally and by example. Netter mentored younger players while fostering an upbeat and competitive attitude. Without Netter, communication breakdowns could derail any hopes this year’s group has of elevating its performance. His partner in crime, Burkett, brought a forceful presence to the interior and encouraged an aggressive mentality. Without his guidance, the run game could stagnate.

Turnover is always a significant hurdle to overcome, but when you lose two stalwarts like Netter and Burkett, replacement becomes even more challenging. It’s not just replacing their productivity. It’s about what they provided in the huddle and off the field. This year’s group will need to adopt that same close-knit dynamic, and they’ll need to do it without two familiar faces. Still, the most pressing issue is the right side of the line and how it can integrate itself with Vitabile, Mulroe and Ward. NU’s spread attack is a complex system at every position, from quarterback to receivers to offensive line, and the jury is still out on whether the revamped right side can master the new schemes while gelling with its experienced position mates.