Today we look at No. 6: Special Teams 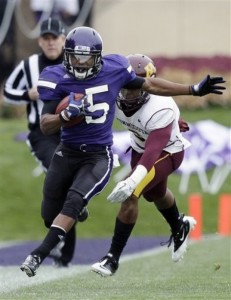 The obvious strength on special teams is in the return game, as Venric Mark emerged last year as one of the best returners in the Big Ten. He was named to the watch list for the Hornung Award — given to the nation's most versatile special teams player — and figures to be one of the top returners in the Big Ten again this year. Coach Pat Fitzgerald thinks he may be one of the best returners in the country. Mark has ben one of the biggest surprises in preseason camp, taking over the starting running back spot, and while he'll now have a lot of added responsibility in addition to returning kickoffs and punts, it shouldn't affect his game very much and may even give him added confidence.

Mark's counterpart on kickoff returns has yet to be named, but there are a few solid options, the most likely one being Tony Jones. Jones was injured all of last season, but he's a speedy receiver that quarterback Kain Colter has called the fastest player on the team. There's more to being a good returner than just being fast, but if Jones can pick it up, he and MArk could form a very dynamic duo on kickoff returns.

While there have been some inconsistencies in the kicking game — more on that later — NU is in a fairly good place with everyone back from last season, including place-kicker Jeff Budzien, kickoff man Steve Flaherty and punter Brandon Williams. Experience could be just what the special teams need to improve on last year's performance.

Northwestern's kicking game and punting game were the definition of mediocre last year. There were some bright spots, but there were a lot of times that they left you scratching your head. Punter Brandon Williams ranked No. 86 in the country last year in punting with an average of 40.75 yards per punt, including a 77-yarder against Minnesota. However, he also had games like the one against Illinois, when he had a 65-yarder and a 27-yarder in the same game. Toward the end of the season, Fitzgerald called Williams one of the most consistent players on the team, which was one of the most puzzling things I've heard from him while covering the team — Williams certainly showed his potential, but has yet to be consistent enough to be routinely effective.

Jeff Budzien struggled at kicker last year, making only 6 of 10 field goals. While only making 6 field goals is an issue, only taking 10 is even worse. There were times NU seemed to be in obvious field goal situations, but Fitzgerald would opt to go for it on fourth-and-distance instead, so the coaching staff didn't seem to have much confidence in Budzien. He's shown that he has a decent leg, with a long of 47 yards, but he was only 2-of-5 from 40 to 49 yards, which needs to improve if NU is going to be better in the kicking game. However, if he can't improve his power, that may be an issue again in 2012.

Since Budzien isn't a very powerful kicker, Steve Flaherty was called upon last year for kickoff duties and Fitzgerald said Wednesday that those roles will stay the same this year. Flaherty had only 6 touchbacks last year and averaged 61.2 yards per kickoff. He'll certainly be aided this year by the kickoff being moved up five yards — that should lead to a lot more touchbacks — so this may not be a huge "weakness" for that reason, but some consistently longer kicks would be helpful for the NU special teams.