Leading up to the upcoming football season, Inside Northwestern will give you a brief profile of each of Northwestern’s opponents. During the season, you can expect a more in-depth preview of each game, including key matchups and more specific player analysis. This is simply a refresher for eager fans looking ahead to the fall. This week, we look at Michigan State. Click here for last week’s edition. 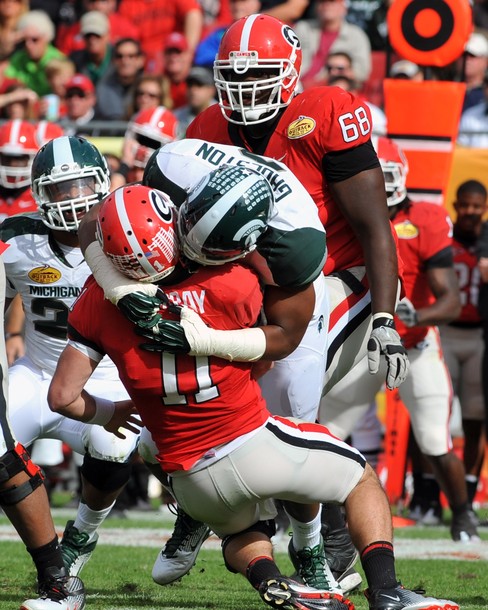 In Gholston, the Spartans have one of the nation's best defensive ends (Photo courtesy Al Messerschmidt/Getty Images).

A tumultuous tenure under John L. Smith left the Spartans in search of a program-changing hire in November 2006. Smith compiled a 22-26 record in his four-year stint and led the Michigan State to just one bowl appearance in 2003. The Spartans needed a new leader to restore their status as a consistent competitor in the Big Ten. Meanwhile, Mark Dantonio had resuscitated long-dormant Cincinnati and oversaw a successful transition into the Big East. With a history of coaching at Big Ten schools – Dantonio was a graduate assistant at Purdue and Ohio State as well as a defensive coordinator with the Buckeyes – Michigan State took a flier on the defensive-minded coach. The gamble has certainly paid off. Dantonio brought immediate success by leading the Spartans in 2007 to a 7-5 record, their highest win total since 2003 and good enough for their first bowl bid in four years. In 2008, Dantonio oversaw a two-win improvement, an unmitigated success despite Michigan State’s 24-12 loss to Georgia in the Outback Bowl. After a down year in 2009, the Spartans reached double-digit victories for just the third time in school history. With an 11-1 record and a share of the Big Ten championship in hand, the Spartans fell to an SEC team in their bowl game, this time a 49-7 thrashing by Alabama in the Capitol One Bowl.

Undeterred, Michigan State entered 2011 as a favorite to represent the Legends division in the inaugural Big Ten Championship game. The Spartans faced a brutal schedule but handled it with aplomb, claiming victories at Ohio State (MSU’s first victory at Ohio Stadium since 1998) against Michigan (for the fourth straight time) and No. 6 Wisconsin on a last-second Hail Mary pass from quarterback Kirk Cousins to former quarterback Keith Nicol. The Badgers got revenge in the league title game thanks to four touchdowns from tailback Montee Ball and a late fourth-quarter roughing the punter penalty on Spartans safety Isaiah Lewis. Again Michigan State missed out on the Rose Bowl and again they faced an SEC team in a New Year’s Day bowl. SEC East champion Georgia stood in their way, and the Spartans gutted out a 33-30 win in triple overtime. It was Michigan State’s first bowl victory since 2001 as well as a point of pride for Big Ten teams looking to disprove the perception of “SEC dominance.”

Not having Cousins to command the line of scrimmage and control the tempo stands as the biggest concern for the Spartans as they prepare to defend their Legends Division crown. Fourth-year junior Andrew Maxwell, a four-star recruit in the class of 2009, has learned under Cousins for three seasons and coaches believe there won’t be much of a drop off. The prevailing consensus is that Maxwell has better arm strength than Cousins, which should help the Spartans develop a vertical passing game. Even if Maxwell’s arm is the real deal, he may not have a suitable complement of receivers on which to utilize his deep ball-throwing expertise. With Keshawn Martin and B.J. Cunningham moving on to the NFL, someone will need to emerge as a reliable target for Maxwell. Converted defensive back Tony Lippett, redshirt freshman Andre Sims Jr. and Tennessee transfer De’Anthony Arnett should be key components in the passing game, along with deep threat Keith Mumphery and massive 6-5, 285-pound tight end Dion Sims. Despite the lack of experience, the receivers are a talented group with huge collective upside.

When lacking reliable pass-catchers, a quarterback needs two things: a strong offensive line and a powerful run game. Maxwell has both. The line is led by two stalwart tackles, junior Dan France and senior Fou Fonoti. Sophomore center Travis Jackson is a precocious talent with a bright future. At guard, third-year starter Chris McDonald is a gritty workhorse in the trenches. He should be paired alongside either Junior Blake Treadwell or redshirt freshman Jack Allen. The running back corps may be the Big Ten’s best, led by bruising junior Le’Veon Bell, a 6-2, 238 pound bulldozer with underrated speed. Senior Larry Caper, a sound pass-blocker and pass-catcher out of the backfield, will share the workload.

It’s hard not to think the Spartans will primarily feature run plays this season. It makes sense, personnel-wise. Bell is poised for an All-conference type season, and the line is an aggressive group capable of opening up running lanes. Add in Maxwell’s game inexperience and mass talent exodus at receiver, and the pieces seem to fit a run-heavy offense. In any case, for those expecting a massive let down on this side of the ball, think again. Despite the lack of explosive playmakers, the Spartans should field one of the league’s best offenses. This team will operate differently than most of its opponents – favoring the run over the pass – but that doesn’t mean it can’t be successful.

Not only is this the Big Ten’s best defense, it’s one of the best defenses in the country. The one potentially damning loss from last year’s stellar group is defensive tackle Jerel Worthy, but senior Anthony Rashad White – who provided the game-clinching field goal block in triple overtime of the Outback Bowl – is a viable replacement. He should start alongside senior Tyler Hoover, though Vanderbilt transfer James Kittredge will make a strong push for the starting job. The Spartans’ best defensive player lines up at end. William Gholston, a 6-7, 275-pound pass-rushing force, is a projected first-round selection in next year’s draft and a consensus All-conference pick. While he came on strong at the end of last season, Gholston should wreak havoc to an even greater degree in 2012. The other end spot should go to sophomore Marcus Rush, who registered 58 tackles and four sacks last season.

Planning against the Spartans’ fearsome front four is a daunting challenge in and of itself. The scary part is that the linebackers are a deeper and altogether more talented group. Three starters – Max Bullough, Chris Norman and Denicos Allen – return from last season to lead a dominant defense. Individually, these guys flat out make plays, with range from sideline to sideline, north and south, seeking and destroying ball carriers. When cohesive and self-contained, this unit has a legitimate argument as the best linebacking corps in the nation. They read offenses to anticipate play calls and explode off the snap. As complements, each player brings his own unique brand of defensive prowess and impacts the game in a different way. The secondary doesn’t lack for playmakers, either, not with cornerbacks Johnny Adams and Darqueze Dennard locking down receivers and providing help in run defense. There’s a slight dropoff at safety from a talent perspective, but sophomore Kurtis Drummond and junior Isaiah Lewis are capable cover men with great instincts.

There’s little doubt this defense will rank among the nation’s best. The wealth of talent at every position creates balance, with no obvious weak points from which opposing offenses can channel their resources. Defensive coordinator Pat Narduzzi is a skilled tactician that can maximize the various weapons on his side of the ball. Narduzzi’s intellect and the volume of talent will make scoring against Michigan State a rare and coveted occasion. If the Spartans play to their strengths – as expected under a coach as savvy and as plugged-in as Dantonio – they will force teams to win low-scoring games by emphasizing strong defense and a sound run game. For this year’s roster composition, that’s a formula for success.