Football Unit Rankings: No. 5, Running Back

Share All sharing options for: Football Unit Rankings: No. 5, Running Back

Today we look at No. 5: Running Back 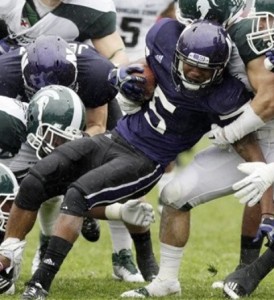 One of the main questions surrounding the running back corps is whether Mark can run effectively in between the tackles (Photo courtesy Nam Y. Huh/AP Photo).

Entering preseason camp the expectation was that Treyvon Green would emerge as the No. 1 back. He played in ever game last season, compiled 362 rushing yards and generally progressed with every game. Unlike last year, Green had the advantage of learning the offense over the course of an entire offseason, and he arrived at camp looking to build upon his impressive freshman campaign. Green's preseason preparation hit a roadblock when he was concussed two weeks ago during a team workout. He has since returned to practice and should be ready for the season opener. Green’s absence opened the door for Venric Mark, who is best known for electrifying kick and punt returns but should see an increased workload on offense this season. Mark is a dangerous playmaker in the open field, a lightning-quick sparkplug with excellent straight-line speed and lateral agility; we know this from watching him run back kicks. Now Mark must learn how to channel those abilities into the running back position, where he’ll likely get the ball mostly on tosses, stretch plays and short screen passes. He’s not the strongest between-the-tackles runner, but he doesn’t have to be.

The Wildcats boast three backs with different skill sets, all of whom can contribute in unique ways. Mark is an explosive runner who functions best when he gets the ball in space. Mike Trumpy is especially tough in short yardage situations, but can also break runs into the second level. Treyvon Green is probably the most well-rounded of the three, though he lacks the speed of Mark and the toughness of Trumpy. That versatility will allow coordinator Mick McCall to choose his backs based on situational specificity. If he thinks he can surprise the defense with a big play, Mark is the answer. On third and short, Trumpy gets the call. The running back position will include all three players, but Mark should still get the bulk of the carries. He impressed coaches in preseason camp and his addition adds a new dynamic to the Wildcats’ running game.

With a solid stable of backs -- not to mention rugged senior Tyris Jones and promising redshirt freshman Jordan Perkins -- freshman Malin Jones will probably end up redshirting. One of the highlights of NU’s 2012 recruiting class, Jones is a skilled back with good size who should enjoy a successful four-year career at NU. That career probably won’t begin this season, barring injury or other unforeseen circumstances. That Jones likely won’t play this season is a testament to the Wildcats’ running back depth. Mark, Trumpy and Green form a strong trio that provides McCall with an element of balance in his offensive gameplans. NU will be a pass-heavy team, but it won’t shy away from running the ball with this strong group.

His preseason performance has been impressive, but Mark has never played the position for any significant stretch, nor is he accustomed to taking the pounding that comes part and parcel with the running back position. As a return man, Mark is as speedy and as explosive as they come, but those talents may not translate at tailback. And Mark may realize that his talents—speed, elusiveness, open-field burst—are most effective in small doses, on special teams. The early returns on his running back play are encouraging. Last season, Mark amassed 104 yards on 15 carries for an impressive 6.9 yards per carry average. As the No. 1 back, his carries will increase, and he simply won’t be able to sustain that pace. Defenses will key in on his tendencies and limit his productivity. Playing running back requires more than speed and explosiveness. It requires toughness and perceptive decision-making at the line of scrimmage. Mark may be able to acquire those traits this season. But it won’t be easy, given his previous history as a wide receiver/return man.

Having depth behind such an unproven player is no doubt a positive development, but questions remain over the long-term prospects of that depth. Trumpy is still getting up to speed after tearing his ACL last season. He has performed well in camp to this point, but—as is the case with all severe knee ligament tears—the injury could limit his speed and explosiveness, especially during the latter part of the season. Green has returned to practice after his concussion and should be ok, unless he suffers another similar hit. If either Green or Trumpy is forced to miss time with injury during the season, Mark would be forced to shoulder a greater carries workload and the versatility—the luxury to shuffle in different backs for different game situations—would no longer exist to the same degree. This group of backs has strength in numbers but lacks a proven No. 1 back. Any loss of depth could be a major blow.

As currently constructed, the trio is strong and talented, a perfect fit for McCall’s spread attack. That could change as the season rolls on. If Mark is unable to handle the gradual attrition that comes with the running back position, or Trumpy can’t regain his pre-injury form, or Green’s concussion problems linger, things could go south in a hurry. All of the pieces need to fit, function and stay intact. If everything breaks right, the Wildcats will have a balanced offense thanks to a strong ground game. It just never seems to work out that way, and NU may find itself reorganizing the running back depth chart at some point this fall.