Every Friday, Inside NU will do a “Take Two,” giving you our opinions on a major topic surrounding Northwestern or college sports in general. Today, we take our best shots at predicting the Wildcats’ most impactful newcomer on the hardwood. Click here, for last week’s edition, where we make a case for which true freshman will have the biggest impact this season.

For most FBS teams, nonconference competition is a testing lab for new schemes and young players. It’s a time where coaches can observe the realization of their teams’ progressions through spring practice and preseason camp. Some games pit two big-name programs – Alabama vs. Michigan at Cowboys Stadium (Sep. 1) comes to mind – while others feature one power conference contender and an overmatched FCS foe. When the new playoff structure goes into effect in 2014, the selection committee is expected to use non-league scheduling strength in its determinative criteria. Theoretically, their formula will encourage FBS teams to schedule tougher opponents out of conference. But for now, many teams are content inviting FCS and lowly FBS opponents to open their seasons, largely because it holds minimal bearing on postseason placement in the BCS.

The selection committee would (theoretically) think highly of Northwestern’s 2012 nonconference schedule, a four-game slate featuring three Big Six conference opponents and just one FCS foe. The game against South Dakota on Sept. 22 should be a cakewalk for the Wildcats, but the first three – at Syracuse (Sep. 1), Vanderbilt (Sept. 8) and Boston College (Sept. 15) could present stiff challenges. Kevin and I have picked out what we see as NU’s toughest contest before they start league play on Sept. 29. Technically, South Dakota was involved in the selection process, but we narrowed our choices to the other three games…for good reason. A strong argument can be made for all three fixtures, so there’s no right or wrong answer. 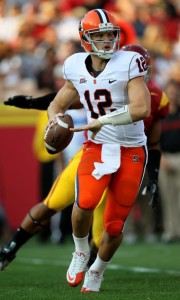 The Orange will rely on Nassib to lead the offense (Photo courtesy Stephen Dunn/Getty Images).

Home field advantage, perhaps more than in any other sport, can influence the flow of play in significant and meaningful ways. Different environments bring different challenges; playing at the Big House in December and playing at Bryant Denny Stadium in September are two contrasting sets of circumstances, each presenting its own unique but hostile climate. The Carrier Dome is not considered one of the nation’s tougher home arenas. Syracuse is a quote-unquote basketball school with little in the way of recent football tradition. It can get awfully loud in the Dome, but it’s nothing Northwestern hasn’t experienced before. Yet the last time NU traveled to Syracuse, the Wildcats fell 37-34 thanks to a field goal on the game's final play. That matchup took place in 2009, the year NU won eight games and lost a thrilling outback bowl against SEC foe Auburn. By contrast, the Orange won just four games that year, and the NU win stood as perhaps their best win of the season.

The gap has narrowed this season, with Syracuse trending upward under fourth-year coach Doug Marrone. 11 starters return from a team then went 5-7 last season and dropped its final five games. Based on their record, one would think the Orange underachieved last year, and understandably so given the remarkably dominant performance they unleashed on Big East champion West Virginia – a 49-23 romp in which the Mountaineers’ high-flying offense was noticeably frustrated for one of the first times all season – one week prior to their five-game skid. That volatility – the very real chance that Syracuse could reel off an indomitable performance or just as easily fall flat on its face – makes this game a dangerous one for NU. The Orange will no doubt be excited for their home opener, eager to knock off a familiar Big Ten foe for the second time in three seasons, so this could very well be the one week they come out like league champion-level destroyer of worlds and throttle the Wildcats. Pat Fitzgerald can only hope that’s not the case, because the rest of NU’s nonconference slate (besides South Dakota) doesn’t include any easy victories.

From a personnel perspective, this is an unfavorable matchup for the Wildcats. The Orange bring back third-year starting quarterback Ryan Nassib, who last season improved his completion percentage (62.4), touchdown-to-interception ratio (22-9) and quarterback rating (129.9). He has two explosive receivers, Marcus Sales and Alec Lemon, who notched 834 receiving yards and six touchdowns in 2011. The wildcard is Ashton Bryold, a dynamic athlete who could line up either at receiver, running back or wildcat quarterback. However coordinator Nathaniel Hackett plans to use Bryold, his unique skill set is but one of the many weapons in what should be a potent passing attack. Nassib will go after the Wildcats’ inexperienced secondary with Lemon and Sales and possibly Bryold. If cornerbacks Nick VanHoose and Demetrius Dugar – neither of whom have played in any extended context – haven’t yet settled into their starting roles, the Orange will march downfield largely undeterred, led by Nassib’s strong and accurate arm. Hackett will likely go with a pass-heavy game plan, not only because it suits the Orange’s personnel but to attack the Wildcats’ weak point: the secondary. NU’s defensive backs will be thrown into the fire right away; if they can’t meet the challenge, the game will quickly turn into a shootout. Even for NU’s high-powered offense, a back-and-forth high-scoring game is a highly fickle and uncontrollable sequence of events.

With the Wildcats cadre of explosive pass-catchers, the Orange are susceptible to NU’s dynamic pass game. Scoring points shouldn’t be an issue for NU in this game. It’s their ability to stop the Orange in their highly-anticipated season-opener, when emotions run high and young, inexperienced players tend to make mistakes. In its first collegiate game, NU’s revamped secondary will get tested by a veteran quarterback and two explosive receivers. If they can rise to the occasion and withstand the Orange’s inevitable energy surge, NU should win handily. If not, the contest will degenerate into an uncontrollable air raid with each side trading scores. That’s not a situation the Wildcats want to find themselves in, even with their powerful offensive attack. 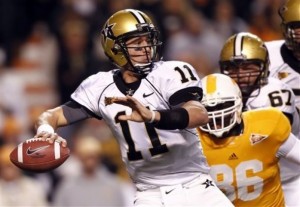 Jordan Rodgers' improvement will be a key for Vanderbilt this season. (Photo courtesy Wade Payne/AP Photo)

James Franklin is the Pat Fitzgerald of a few years ago. The young Vanderbilt coach has helped return the program to relevancy, taking the Commodores to a bowl game last year. Now, moving into year two, he's one of the biggest young coaching stars in the game, and for good reason. While the results on the field weren't stunning — a 6-7 season and 2-6 in the SEC — the Commodores' 2013 recruiting class ranks No. 16 in the country, according to Scout.com, and the class includes two four-star recruits. So pretty soon, Vanderbilt is likely to start seeing better on-field results.

This year, Vanderbilt might actually be a it overrated. Last year's record was more due to a watered down schedule than anything. The Commodores' best victory came against a 5-7 Kentucky team, but close losses to Arkansas, Florida and Georgia were "encouraging." A lot of the hype surrounding Vanderbilt this season is based on its recruiting success, but that's not a great thing to based predictions off of, especially considering the 2013 class isn't even on campus yet and the current freshmen won't be very effective in their second college game ever.

However, the Commodores are still a solid team — better than Syracuse and Boston College — so this will be a good challenge for Northwestern, but not un-winnable by any means.

Vanderbilt quarterback Jordan Rodgers, brother of Packers quarterback Aaron Rodgers, will be a senior and back for his second year as a starter. He had underwhelming statistics last season with a 50 percent completion percentage and 9 touchdowns to 10 interceptions. He must improve those numbers if Vanderbilt wants to build on last year, and Northwestern needs to develop a pass rush early to take him out of rhythm and help out the young secondary. Rodgers has top receiver Jordan Matthews back, but the passing game figures to not be anything special, as it ranked No. 97 in the country last year. The running game should be good, with Zac Stacy returning after a 1,000-yard season, but ultimately, NU's ability to disrupt the Commodores' offensive rhythm will be a key to the game.

Vanderbilt's strength is its defense — the unit ranked No. 29 nationally in scoring defense last year. NU should be one of the better offenses that it faces this year — the Commodores have a fairly weak schedule — but the Wildcats' offense struggled to find its stride early last season, and if that is a problem again in 2012, Vanderbilt could roll. NU must find a way to score points to relieve the pressure from the inexperienced defense.

Ultimately, this game isn't as tough as many people are making it out to be. Vanderbilt is better than NU's other non-conference foes — most teams are better than Syracuse, Boston College and South Dakota — but the Commodores would be a middle of the pack team in the Big Ten. However, it will be an big game under the lights and the second straight week of FBS competition for both teams — Vanderbilt faces South Carolina in week one, while NU faces Syracuse. It will be interesting to see how the Commodores react to the game against South Carolina — it's either a loss to start the year or it's a huge win that could lead to a letdown the next week. Either way, there should be plenty of storylines from this game in the second week of the season, as both teams try to surprise people and build momentum heading into week three.