Share All sharing options for: Football Unit Rankings: No. 4, Quarterback

Today we look at No. 4: Quarterback 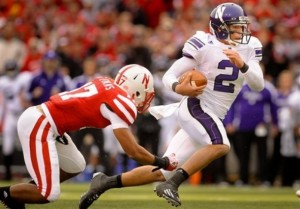 Quarterback has been a strength for Northwestern going back to early in Pat Fitzgerald's tenure and even during the Randy Walker days. Brett Basanez, CJ Bacher, Mike Kafka and Dan Persa were all solid players and now Kain Colter is next in line to be NU's next great quarterback. Though Colter is technically a first-year starter at quarterback, he started in place of Dan Persa at times last year and seems very capable of taking over the full-time starting duties at quarterback. He was instrumental in NU's win over Nebraska and led the team in rushing with 589 yards on the season.

While he likely won't be as accurate of a passer as Persa and won't air it out like Kafka, Colter is the most elusive quarterback the Wildcats have had. He needs to develop more as a passer, but his ability to avoid pressure and pick up positive yards out of a broken play will be important, especially with a mediocre offensive line. Colter will have one of the best wide receiver units in the Big Ten helping him out and NU has also introduced an option attack to fit the skill set of Colter and Venric Mark. If the option is a success and Colter continues to develop in the passing game, he could be one of the most productive NU quarterbacks in history on the ground and through the air.

Behind Colter is Trevor Siemian, who coach Pat Fitzgerald refers to "1.B." rather than second string. Siemian is the backup, but has game experience and is a solid passer. He should get chances to see the field this year, since Colter will go out to wide receiver in certain packages like he did last year. Colter will be running a lot and taking a lot of hits, so there is always the possibility of injury, and while losing him as an offensive weapon would hurt, NU has a very capable backup in Siemian.

Colter has been receiving a lot of hype from around the country as a surprise player in the Big Ten, and while he certainly has the potential, those predictions are predicated on the assumption that he will have developed fully as a passer. He completed 67.1 percent of his passes last year, which is very respectable, but he was a run-first player and there are questions to whether he will be able to make throws in obvious passing situations. He has seemed fine throughout camp, but struggled in the spring game, and it's tough to know exactly what to expect when the Cats hit the field against Syracuse.

If Colter can't make those throws and NU has to go to Siemian, will he even be able to do it? Siemian is an even less-experienced passer than Colter, and while he's more experienced than most backups, it won't be a seamless transition if Colter goes down due to injury — a possibility given how many hits he's likely to take. While the odds are Colter do just fine as a passer and Siemian will do well in his role, given what we've seen from camp, it's not a certainty.

After Colter and Siemian there isn't a lot of depth. Zach Oliver redshirted as a true freshman last year, and as a pure passer he doesn't really fit the current offense. He's made some good passes in camp, but has also had some puzzling throws and isn't anywhere near game-ready. If Colter goes down and Siemian can't handle full-time duties, NU could be hard-pressed to find offensive production, and production on that side of the ball is a must considering the inexperience on defense.