Today we look at No. 3: Defensive Line 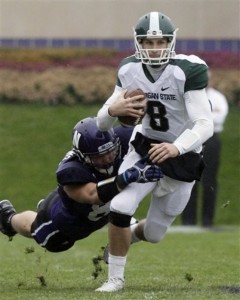 If Williams can generate pressure off the edge, the defensive line could exceed expectations (Photo courtesy Nam Y. Huh/AP Photo).

Strong performances from several young players this spring created the possibility of a starting defensive line rotation consisting of an interesting mix of youthful upstarts and veteran mainstays. Instead the veterans held fort, outperformed their younger challengers and maintained their starting spots going into “game week.” There was speculation that Deonte Gibson would ride the considerable momentum he built in the spring into a starting end job, but he was eventually overtaken by mentor Quentin Williams, one of the team’s strongest and most vocal leaders. Williams started seven games last season and was instrumental in harassing Nebraska quarterback Taylor Martinez into several mistakes in Northwestern’s upset victory in Lincoln. Joining Williams at end is Tyler Scott, a 204, 265-pound junior with remarkable strength and burst off the edge. Scott has a knack for locating and making plays around the ball – he ranked second in the Big Ten with three fumble recoveries last season – not to mention pressuring quarterbacks with an imposing blend of brute force and nifty pass-rushing techniques. Williams and Scott form a strong tandem, one capable of collapsing the pocket and disrupting opposing offenses.

When Chance Carter ran back a Zack Oliver pass 40 yards for a pick six (for the purposes of the spring scrimmage, it was worth 17 points) in the latter part of the spring game, it capped an altogether impressive spring slate for the 6-3, 270-pound sophomore. An active presence along the interior, Carter flashed great quickness and power in team workouts and made a strong case to unseat incumbent Will Hampton at tackle. Carter’s slight advantage heading into preseason camp faded as Hampton regained the edge. After playing in every game last season, Hampton has the experience and schematic knowledge to make an impact as an interior run stuffer. He meets defenders at the point of attack and drives back opposing linemen. While Hampton needs to work on his gap discipline, his power and leverage in the trenches are an asset for an NU line that needs to improve its resolve in the trenches.

Unless things change in the final week leading up to the season opener, the veterans are positioned well to keep their starting spots for week 1. Gibson and Carter will both see major playing time at their respective positions. Gibson will rotate in as a speed-rushing specialist in obvious passing situations, while Carter and sophomore Sean McEvily will spell Hampton and senior Brian Arnfelt at tackle. True freshman Dean Lowry should also get some playing time behind Scott and Williams. The experience at every position will help the line excel against veteran Big Ten offensive lines. Young guys like Gibson, Lowry, Carter and perhaps freshman Ifeadi Odenigbo will ensure there’s no complacency among the established starters. Any discernible downturn in performance could produce a changing of the guard along the d-line, the official implementation of the youth movement. The constant back-and-forth between the plucky youngsters and the veterans will engender a positive rapport among line mates constantly pushing one another  for playing time.

Continuity within any position unit is typically a positive development. Players normally improve with experience and returning for another year with those same players should helps the group’s overall effectiveness. NU’s defensive line – which ranked last in the Big Ten with 17 sacks and 10th in rushing defense by allowing an average of 177.3 yards per game in 2011 – may veer from the customary line of reasoning. The lack of turnover could stand as a concern, much less a positive development. After all, the returning group struggled for large stretches of last season, and it’s unlikely they can reverse course without some new blood to shake up the personnel formula that simply didn’t suffice in 2011. Arnfelt and Hampton are solid, functional players, but neither is a game changer, the sort of dynamic presence who can propel his teammates out of the kind of sustained rut the line endured last season. Teams with massive offensive lines and strong running attacks will punish the Wildcats at the line of scrimmage, teams like Michigan State and bruising tailback Le’Veon Bell, Michigan and slippery scatback Fitzgerald Toussaint. The defensive tackle position will wear down as the season progresses and opponents will establish the run game with little resistance.

More concerning is pressuring the quarterback. Scott and Williams can rush the passer on occasion, but not with enough consistency to fundamentally alter any team’s offensive game plan. Gibson and Lowry have shown promise, but neither is accustomed to playing on a part-time basis, to hopping in for one or two plays at a time and sitting for long periods in between. Making plays in practice is impressive; it’s the best way to prove coaches you deserve playing time. Making plays against opposing teams (and doing it with some level of consistency) is another matter entirely. With the stakes raised, the youngsters could crack under pressure, or play on pure emotion and hype while losing sight of their ultimate tactical and positional responsibilities.

If the young talent that gave NU’s defensive line so much intrigue and promise entering preseason camp fails to meet expectations, the defensive line will constitute a weakened version of last year’s ineffective group. Given NU’s problems in the secondary, a failure to a) stop the run and/or b) rush the passer could crater any hopes of contending in a deep Legends division. Winning the line of scrimmage is of high importance for any defense. For NU, unless last year’s players undergo a massive transformation or the new talent has an uncharacteristically short learning curve, the line will sustain its performance from last season – the result being another thoroughly insufficient effort at the line of scrimmage. Players can improve over the course of their careers, but any radical progression usually requires more than one offseason. This line could experience that sort of rapid development, but no player has proven as much in preseason camp and it’s not likely anyone can make a huge jump come week 1.