Share All sharing options for: Football Unit Rankings: No. 2, Linebackers

Today we look at No. 2: Linebacker 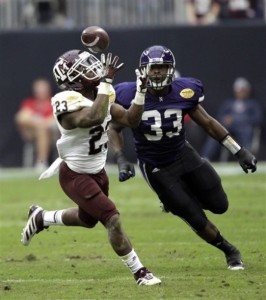 Outside (Will) linebacker David Nwabuisi returns for his senior year after making 12 starts in 2011. (Photo courtesy David J. Phillip/AP Photo)

This year's linebacker corps has an incredible combination of experience and depth. Three starters from last year — Proby, Nwabuisi and Ellis — are back, and Ellis won't even be starting, as Ariguzo has moved up the depth start after contributing as a backup during his redshirt freshman year. Coach Pat Fitzgerald called Ellis "1.B." on the depth chart, and while that's typically Fitzgerald's nice way of saying a guy is a good player, but still a backup, it actually applies to Ellis. NU will use a four-man rotation and Ellis will see plenty of the field.

The four starters are very versatile in their ability to play at different linebacker spots, and that will help NU with its rotation.

With so many different options, NU will always have an effective linebacker group on the field, and all of the four "starters" are experienced. Ariguzo doesn't have any starting experience, but he has played before and isn't new to the field, while Ellis started some games, though he battles a hand injury in preseason camp. Proby has been unheralded over the past season and offseason, but he played so well at middle linebacker that he earned a starting job there for the final seven games of the season, and he could garner some postseason award attention. Nwabuisi started 12 or 13 games at linebacker last year, shifting from the middle to the outside when Proby came in.

Even behind the top four, there is a lot of talent. Redshirt freshman Drew Smith has been impressive in camp and should see some time this year in a backup role, while junior Timmy Vernon has done the same. All six of those guys help make the linebackers the best unit on NU's defense.

The depth is good in the sense that NU essentially has four starters for three spots and there are two promising players behind those starters. However, linebackers tend to be injury-prone, and if NU loses a couple of its starters, this unit could be very mediocre. Smith and Vernon have both looked good in camp, but there's a big difference between camp and the Big Ten. If a couple guys get injured, the linebackers could suffer like the secondary last year, when players were inserted into roles they weren't ready for.

Behind Vernon and Smith, there aren't a lot of great players, either. Senior Roderick Goodlow was moved from linebacker to defensive end and redshirt freshman Doug Diedrick was moved to super back, leaving Will Studlien, who will see most of his work on special teams — as the only player remaining at linebacker from the spring depth chart. It's unlikely that there will be enough injuries that NU's depth is truly that affected, but in football, nothing is certain.

The only other real issue with the linebackers is how bad the defense was in general last year, especially with communication. The linebackers are supposed to be the "quarterbacks of the defense" so they share some of the blame for NU's woes in pass defense. With so many new faces in the secondary, the linebackers are going to have to help out in pass coverage more than they might want to, and if they don't provide more help than they did last year, NU could see more struggles in pass defense, especially early in the year.