In our final installation of the preseason unit rankings, this year's winner is....Wide Receiver

Northwestern’s strongest position group is also the best of its kind in the Big Ten. That’s right: the Wildcats batch of pass-catchers is – at least on paper – the league’s deepest and most talented unit. Most dominant receiving corps are led by a transcendent No. 1 wideout who commands an enormous share of targets and likewise a disproportionately large amount of catches and yards. The Wildcats’ receivers will operate in a balanced fashion, with passes spread out among a deep group. A host of returning players plus a key transfer makes this group arguably the best receiving corps of Pat Fitzgerald’s tenure. It’s not often that you have this many players capable of impacting the game by making big plays. There are eight pass-catchers who can make their mark on the Wildcats’ passing game this season and each brings a unique brand of playmaking ability. I’ve listed the projected starters and challengers, but there’s not much to take away from those arbitrarily designated roles; with so many talented players, the rotation is likely to change several times throughout the season. The above designations correspond to the official two-deep released at yesterday’s press conference. 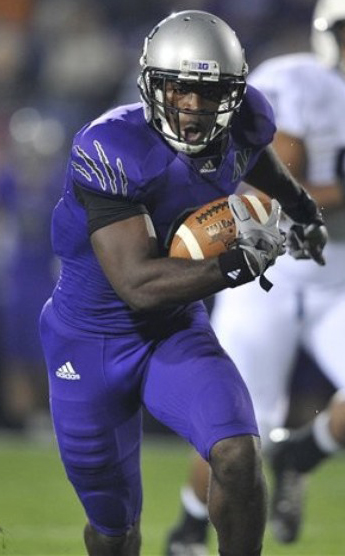 From top to bottom, each player will function in a specific way to maximize the overall talent within the group. A prime target for quarterback Kain Colter will be Christian Jones, who at 6-3, 225-pounds can physically overmatch defensive backs to make big plays downfield. He caught 16 passes for 195 yards as a true freshman last season, but should improve after a year learning the playbook and settling into coordinator Mick McCall’s spread offense. The speediest member of the group is sophomore Tony Jones. Like Christian Jones, Tony played as a true freshman, only his rookie season came in 2010. He was forced to miss all of 2011 after suffering a severe knee injury right before the season-opener at Boston College. Jones has fully recovered with all the speed and quickness and dynamic open-field explosiveness he had pre-injury. He gives Colter a true deep threat but can also work in the slot and make plays over the middle. The two veterans, Rashad Lawrence and Demetrius Fields, offer reliable pitch-and-catch options on various types of routes and schemes. Neither player stands out in one particular area. They’re well-rounded receivers and super blockers who offer solid fundamentals, savvy route-running and shrewd instinctual play.

The backup or “challengers” label is somewhat misleading for this group, because the dividing line between starter and second-teamer is paper thin – depth chart shuffling at receiver is to be expected. Cameron Dickerson may be the best candidate to break into the first team group sooner than later. He stole the show at NU’s spring game with an acrobatic 44-yd touchdown catch and has continued to impress in preseason camp. With excellent big play ability and uncanny jump ball skills, Dickerson will get his work in this season. It may strike you as somewhat surprising that Prater hasn’t cemented a spot in the starting lineup. Truth is, Prater has struggled with injury in training camp, and for all his talent and physical dominance, he hasn’t decidedly outperformed any of the four starters. That Prater – a former five-star recruit coming out of Proviso West high school (IL) – will likely begin the season as a backup says as much about NU’s receiver talent as it does Prater’s lingering health problems. Another impressive spring performer was Pierre Youngblood-Ary, a deep threat who made huge strides during his redshirt season. Mike Jensen, a sure-handed target with crisp route-running skills, should contribute in the slot.

The wealth of targets will make defending NU’s passing game a constant struggle. Colter can throw the ball in various directions to various players on each designed pass plays, which renders double and bracket coverages ineffective. If an opposing team assigns two defenders to, say, Christian Jones, that leaves Tony Jones or Rashad Lawrence or Cameron Dickerson with more space to make plays and exploit the lopsided coverage. McCall will find ways to mix and match the various weapons at his disposal to take advantage of weaknesses in different defensive schemes, which should afford Colter at least one open target on every play. If he can deliver the ball – this is a legitimate question to ask given Colter’s oft-erratic arm – this has the makings of a prolific passing attack.

It’s tough to find fault with a group as deep and as talented as this receiving corps. One point of concern may be the lack of a true No. 1 wideout, the sort of dominant presence who can be counted on to make big plays in critical situations. If the offense needs a third-down conversion or a late-fourth quarter touchdown, there’s no prevailing consensus on who’s best suited to make that crucial play. Without a “go-to” receiver, someone needs to distinguish himself from the pack.

I’m simply nitpicking at this point. Several players within the group could take on that role, if one hasn’t already. The receiving corps is NU’s best position group for good reason: weaknesses are few and far between.