Game week has officially arrived. By now, you’ve already made plans to watch/attend Saturday’s opener at Syracuse. And over the next three days, we’ll be getting you ready for kickoff with some in-depth preview material. Before we get there, we’ve decided to wrap up our “Take Two” series with a more general topic but a hugely important one nonetheless. With the season kicking off this weekend, we’re rolling out our predictions for Northwestern’s final record and bowl game. I’ve already somewhat spoiled our predictions by acknowledging we both envision NU reaching a bowl game this season. So before I say any more, let’s begin:

Any season-long projection must take into account a number of different factors. First and foremost is the team itself. There are two basic but fundamental questions to be asked: can the offense score points? And can the defense, you know, stop other offenses? The next topic of discussion is the schedule. It is not at all surprising to see a team improve from one season to the next with no corresponding win total jump to show for it. It’s the cyclical nature of scheduling. All you can hope is that your favorite team catches the opposition at its weakest state and takes advantage. Then there’s the unquantifiable, intangible qualities that help define every football team. Leadership, experience, toughness, work ethic – these things matter, even if they don’t show up in a simple box score. With those three criteria in mind, I’ve tried to piece together a logical argument to support my claim without getting into the specifics of each game. 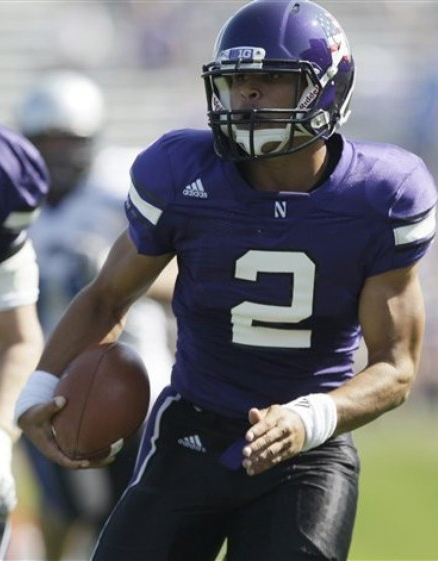 It would be easy to assume NU’s offense will yet again rank among the Big Ten’s best in 2012 (Last season, the Wildcats finished fifth in scoring offense with 28.9 points per game and second in total offense with 420.8 yards per game). Quarterback Kain Colter by definition is not a returning starter, but he started several games last year and was frequently called upon to spell the oft-injured Dan Persa. Colter brought a dynamic element to the quarterback position, an defensive coordinator’s nightmare capable of making plays with his arms and his legs. There’s little doubt he improved his arm strength and accuracy this offseason and he’ll have ample opportunity to test his upgraded throwing on what many are calling the Big Ten’s best receiving corps. Throw in an infusion of running back speed in the form of kick/punt return dynamo Venric Mark, and this offense has the makings of a potent unit. Only there’s plenty that could go wrong. Maybe Colter can’t handle the quarterback job on a full-time basis, maybe Mark is better-suited sticking to his special teams duties and maybe the offensive line will prevent the offense from realizing its potential. Just one of those outcomes could severely limit NU’s offensive output. That said, there’s so much that could go right. The pieces are in place for Mick McCall’s high-octane system to light up scoreboards across the Big Ten. The unit may fall short of expectations, but it should end up as one of the league’s better offenses.

There are lots of uncertainties on the other side of the ball, the obvious one being the secondary, which ranked last in the Big Ten defending the pass last season (230.4 yards allowed per game). If sophomore Ibraheim Campbell, the unit’s lone returning starter, can make the leap into league and national DB stardom some are expecting and the new starters – cornerbacks Nick VanHoose and Demetrius Dugar and safety Davion Fleming – can sustain a respectable level of performance, the secondary may exceed expectations. But the ceiling is relatively low, even if Campbell shines, and the cornerbacks take well to their new roles and Fleming complements Campbell in an effective way. The linebackers may be the most predictable position group on NU’s roster, mostly because it’s essentially the same group from last season. David Nwabuisi, Damien Proby and Chi Chi Ariguzo form a solid rotation, bolstered by reliable back-ups like redshirt freshman Drew Smith and sophomore Colin Ellis. Up front the picture is less stable, though youngsters Chance Carter and Deonte Gibson will provide great energy and intensity in the trenches behind an experienced starting group. Last season NU ranked 11th among Big Ten teams in total defense and 10th in scoring defense. Expecting anything more than a two-or-three spot jump in each category may be overshooting realistic performance.

Looking at NU’s 2012 schedule, it’s manageable, but demanding. The nonconference slate offers three power-conference foes (Syracuse-9/1, Vanderbilt-9/8, Boston College-9/15), none of which are surefire victories. The Carrier Dome is not the ideal place to play your first road game of the season, Vanderbilt brings back plenty of talent from its 2011 Liberty Bowl squad and Boston College will rally around on-the-hot-seat coach Frank Spaziani with improving quarterback Chase Rettig. The League portion of the schedule can be broken down into two segments. The first begins with a home date against Indiana (9/29), followed by road tests at Penn State (10/6) and Minnesota (10/13). The Wildcats can take all three, or they could just as easily drop the two road tests. After returning from Minnesota, the next segment kicks off with consecutive home contests against Nebraska (10/20) and Iowa (10/27), two winnable but challenging games. Then the Wildcats enter the most difficult part of their schedule with road games at the two Michigan schools. They wrap-up with the Land of Lincoln Rivalry at Ryan Field. Beating Illinois is a must, particularly if NU – barring an upset – loses at Michigan and Michigan State. NU’s final record may ultimately come down to its experience and poise, its toughness and resolve on the road, its will and focus to erase second half-deficits and maintain leads.

Anything from five to eight wins is a plausible scenario; seven is the number I came up with after weighing the above factors and playing out numerous outcomes in my college football-hungry mind. It’s awfully premature to predict specific wins and losses because so many things can change over the course of the season. My picks will likely change – The bowl game pick in particular is subject to variation considering the different elements (Other Big Ten team’s bowl results, the performance of other conferences, etc.) involved – as the season progresses, but here is my preseason edition of predictions for NU’s game outcomes and bowl destination. 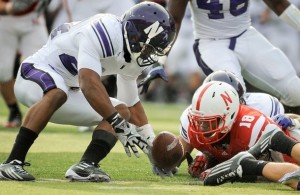 Before I say this, let me say that my decisions on wins will likely change over the course of the season. So even though I have NU losing to Vanderbilt in week two, I see that game being really close and could certainly change my mind by next week after seeing both teams play. Really, preseason predictions are pointless, especially with teams as young as this, because nobody knows what to expect. But they're fun and people love predictions, so we're doing them anyway. Remember, though, if you don't like these predictions, know that 9-3 is a possibility, but so is 5-7.

The biggest factor in NU's success will be whether play in practice shifts to play in games. Pat Fitzgerald always preaches that NU uses practice to get players as close to game-ready as possible, but there's an undeniable difference between the practice field and the playing field. In practice, NU has looked better than last year. The offense, particularly has been rolling in the fall. The wide receivers seem to be as good as advertised after a mediocre spring, Kain Colter is very dynamic as a runner and passer and he and Venric Mark team up to form and impressive rushing duo and an intriguing option game, which has been featured in practice at times. NU won't have trouble scoring points, just as it hasn't throughout Fitzgerald's tenure.

The big question mark is the defense, which was terrible last season and lost some of its leaders and playmakers. Fitzgerald says the Wildcats have worked on the communication issues that killed the secondary last year, but it's tough to know if the problem has been fixed until we see the unit on gameday, especially considering how many new faces there are. The linebackers should be good, and the defensive line certainly has the potential to be good. The line worked on improving its pass rush this offseason — a must with a young secondary — and while it looked good in practice, again, we'll have to wait and see how things go in a game.

Now let's check out the schedule. I think NU is the best team on its non-conference schedule, but I also think it will drop a game. NU has become infamous for losing non-conference games that it should win, and while Vanderbilt is overrated and not worth all the hype this season (it will be in a few years), the Commodores are still a formidable opponent and could easily upset the Cats. NU could also lose to Syracuse, just as it did in 2008 with a better team. However, 3-1 sounds like the most likely scenario.

NU has to jump out to a quick start on its conference schedule, because the last five games are brutal. While the Penn State game could go either way, the Cats have a great chance of starting conference season 3-0, with a home game against Indiana and trips to Penn State and Minnesota. But after that, NU plays arguably its five toughest games — vs. Nebraska, vs. Iowa, at Michigan, at Michigan State, vs. Illinois. At best, NU is looking at 2-3 there, but it could also go 0-5. More than likely, the Cats will get one win in that stretch.

Most people would probably put their money on beating Iowa, but this Hawkeyes team is different than the ones NU used to torture in the past. It's a young team, but it's expected to throw a lot on offense, which could hurt NU's secondary. Defensively, the corners are apparently going to be playing more press coverage and there are more blitzes. The defense seems to be changing to defend rushing quarterbacks, which takes away a little bit of the advantage NU previously had over Iowa. However, the Hawkeyes are so young that NU definitely has a chance. The Nebraska game is also a possibility for a win, but it's not likely that the Cats will beat the Cornhuskers two years in a row. It's possible, especially if they get the same kind of pass rush they did last year and wear down Nebraska quarterback Taylor Martinez, but NU certainly won't be favored.

NU's best chance for a win comes against Illinois, and that may be the most important game to win since it will decide momentum heading into bowl season, and if both of those teams are fighting for spots at the end of the year, NU could beat out the Illini.

As for bowl projections, I expect Iowa to be 8-4, NU to be 7-5 and Illinois to be either 8-4 or 7-5, with those teams fighting for the Gator Bowl and Buffalo Wild Wings Bowl (Purdue could also be in the equation, but I think the Boilers will underachieve and go 6-6). The Gator Bowl chooses first and Iowa is the most attractive bowl team out of the three, fan attendance-wise, so I have the Hawkeyes headed for Jacksonville. Illinois travels better than NU to games, but not by a lot, and I expect the winner of that last game to go to the Buffalo Wild Wings Bowl in Tempe — it also helps that NU has never been to the desert. If Illinois wins that final game, however, the Meineke Car Care Bowl of Texas will likely pass on having NU again, sending the Cats to the TicketCity Bowl.