Leading up to the upcoming football season, Inside Northwestern will give you a brief profile of each of Northwestern’s opponents. During the season, you can expect a more in-depth preview of each game, including key matchups and more specific player analysis. This is simply a refresher for eager fans looking ahead to the fall. This week, in our final installation of the "Know Your Opponent" series, we look at Illinois. Click here for last week’s edition. 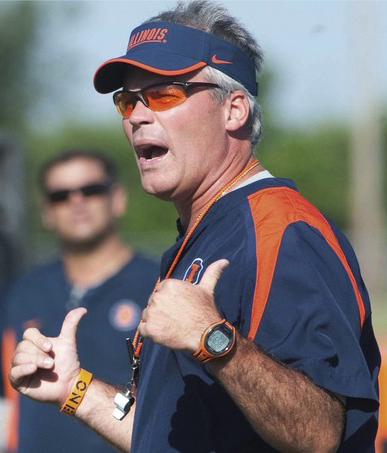 The last time Illinois won a Big Ten championship was 2001, when coach Ron Turner led the Illini to a 10-2 record, including seven conference wins, and an appearance in the Sugar Bowl. It may not seemed like it at the time, but the program had reached its peak in that decade. The next three years saw the Illini’s win totals plummet, from five in 2002 to one in 2003 to three in 2004. Turner was fired after the 2004 season and replaced by Ron Zook, who was dismissed from the same position at Florida following a 7-5 season in 2004. In three seasons with the Gators, Zook did not beat a ranked opponent at home, nor could he satisfy a demanding fan base conditioned to 9 and 10-win seasons under former coach Steve Spurrier. Illinois nonetheless chose Zook to restore the preeminent position it held earlier in the decade. The early returns on the hire were not encouraging. The Illini posted back-to-back two-win seasons in 2005 and 2006, and Zook struggled to improve the program’s standing in the Big Ten. He did make headway on the recruiting trail, which boded well for the Illini’s future. That recruiting success manifested itself in a breakout season in 2007, when the Illini finished 9-3 (6-2, Big Ten) and received an invitation to the Rose Bowl (Big Ten champion Ohio State was selected for the BCS National Championship game that season). The seven-win improvement earned Zook a new contract – to go along with a Big Ten Coach of the Year Award – that paid roughly $1.5 million annually through the 2013 season. The positive momentum from Illinois’ Rose Bowl season faded with a 5-7 campaign in 2008 followed by a three-win season in 2009. Zook continued to reel in stellar recruiting classes, but the talent wasn’t translating into on-field success. The Illini made it back to the postseason in 2010, a season that saw Mikel Leshoure emerge as one of the nation’s best running backs.

Six wins to begin the 2011 season had Illinois fans feeling good about their chances of reaching a high-tier bowl game. It all went downhill after a 41-20 win at Indiana. In a stunning downturn in performance, the Illini lost their next six games, including road defeats at Purdue (21-14) and Minnesota (27-7). The Illini became the first FBS team to win its first six games then lose the next six. Zook was predictably fired. Illinois nonetheless earned bowl eligibility at 6-6 and would go on to defeat UCLA in the Kraft Fight Hunger Bowl, a game dubbed the “Fired Coaches Bowl” for its inclusion of UCLA, who had just fired coach Rick Neuheisel, and the Illini. Replacement Tim Beckman roamed the sidelines during the Illini’s bowl victory. Over three seasons at Toledo, Beckman established the Rockets as a perennial MAC contender with his trademark spread offense. In 2011, Toledo won nine games and fielded the nation’s ninth-ranked offense (481.31 yards per game). That high-powered attack explains to at least some degree why Illinois, who failed to score more than 17 points in its final six conference games, hired Beckman to reignite its stagnant offense.

There’s no telling how Beckman will fare in his first Big Six conference head coaching gig, but he’s managed to continue Zook’s recruiting success while bringing an upbeat mentality to a middling program. Beckman has also ratcheted up the Land of Lincoln Rivalry during his short time in Champaign. At his introductory press conference, Beckman claimed he will never wear purple. He then plastered in the Illini’s locker room a Northwestern logo circumscribed by a red circle and slash line, a message signaling his distaste for what he calls “that school up north.” The rivalry extends on the recruiting trail, too, where Beckman has picked up six in-state commitments, including four-star quarterback Aaron Bailey, a top target for NU. The competition on the gridiron has favored Illinois the past two years, with the Illini notching victories at the Wrigley Field game in 2010 and last year’s 38-35 thriller in Champaign. From the looks of it, Beckman has made it a point of emphasis to ensure the balance of power and the Land of Lincoln Trophy remain in the southern portion of the Prairie State. 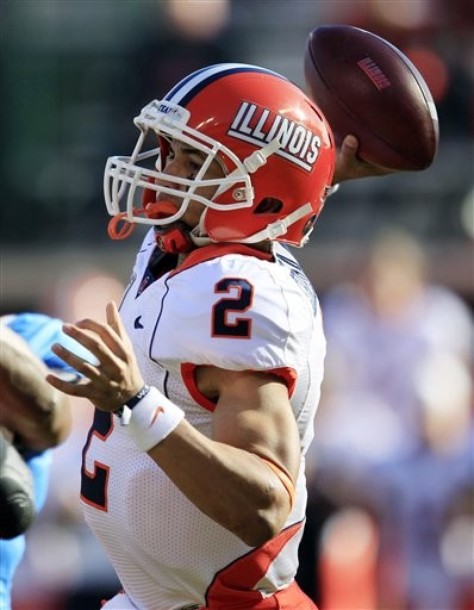 The implementation of Beckman’s spread system should provide a spark to an offense that averaged 355.7 yards and 22.6 points per game in 2011, both of which ranked ninth in the Big Ten. He produced high-scoring outfits at Toledo, and has the talent and resources to oversee an even more productive unit in Champaign. The uptempo system is a perfect fit for quarterback Nathan Scheelhaase, a dynamic, dual-threat signal-caller who makes up for his subpar passing accuracy with elite athleticism. Against NU last season, Scheelhaase threw for 391 yards and one touchdown and added a rushing touchdown for good measure. His passing numbers declined in the second half of the season as the Illini sputtered to a .500 record. Those struggles persisted into the spring, where Scheelhaase completed just 11 of 26 passing attempts for 65 yards in the spring game. Suspect arm strength and accuracy will limit his overall productivity, but Scheelhaase should thrive in Beckman’s scheme. Don’t be surprised if sophomore Reilly O’toole spells Scheelhaase at some point this season.

For Scheelhaase to perform the way he did when the Illini were riding a six-game win streak and emerging as a potential BCS bowl candidate, he needs a receiver to replace the NFL-bound A.J. Jenkins, who hauled in 90 catches and 1,276 receiving yards last season. A strong candidate to step into the No. 1 receiver role is junior Darius Millines, a 5-11, 185-pound speedster with great upside. Two fellow classmates, Spencer Harris and Ryan Lankford, will compete to fill out the rotation, along with sophomore Fritz Rock and redshirt freshmen Kenny knight and Jeremy Whitlow. The receiving corps should get a boost from the defense, too, with senior cornerback Terry Hawthorne expected to contribute as a pass-catcher this season. There are four tight ends with legitimate chances to make plays in Beckman’s free-flowing system, a group led by sophomore Jon Davis and junior Evan Wilson.

The Illini finished sixth in the Big Ten in rushing offense, thanks in part to Scheelhaase’s ability to scramble out of the pocket and make plays. The junior quarterback was the team’s leading rusher in 2011, and Jason Ford – now a member of the Pittsburgh Steelers – was just 24 yards behind him with 600. This year Beckman will rely on a two-pronged rushing attack. Sophomore Donovonn Young and redshirt freshman Josh Ferguson will get the lions share of carries, though Beckman could mix in some designed runs for Scheelhaase. Whatever the distributive specifics, the cumulative rush total should be spread out among a group of talented and dangerous runners. Ferguson, Young, Scheelhaase and whoever else steps up will be running behind an experienced line that features two projected senior starters: left tackle Hugh Thornton and left guard Graham Pocic. Junior Jake Feldmeyer might have a hold on the starting center spot after an impressive spring. The right side of the line remains in flux, but sophomores Alex Hill and Michael Heitz have slight edges at guard and tackle. Redshirt freshman Ted Karras will challenge Hill for the starting guard spot while sophomore Simon Cvijanovic could supplant Heitz at tackle. The competition should produce an altogether stronger and more unified line.

Adjusting to a new system could lead to some early growing pains, but Scheelhaase’s return will facilitate a manageable transition. If some new receivers can step up to replace Jenkins’ production and Young/Ferguson complement one another in an effective tailback tandem, the offense should be vastly improved from the sluggish unit that flat-lined in the second half of last season. If there’s one thing we can expect from Beckman, it’s that his offense – even in year one – will be tough to defend. 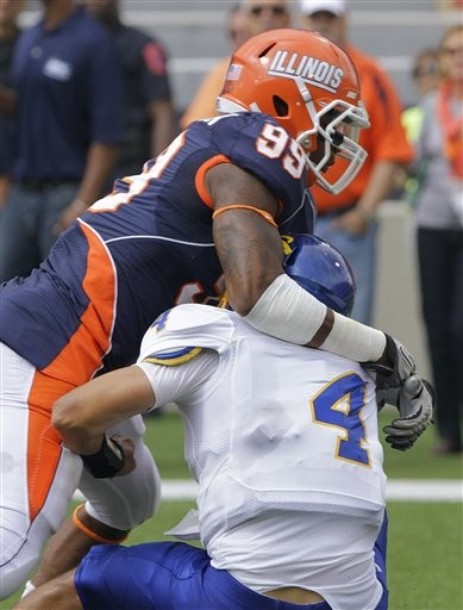 The strongest personnel grouping on this year’s Illini squad is the defensive line, and that’s without end Whitney Mercilus, a first-round pick in this year’s NFL draft. Three starters return on a potent pass-rushing ensemble, fronted by senior ends Michael Buchanan and Justin Staples, who must sit out the first two games of the season following a DUI arrest but will be replaced by talented junior Tim Kynard. All three players are elite pass-rushers, each with their own unique way of getting off the edge and getting after opposing quarterbacks. Stopping the run is another point of pride for line coach Keith Gilmore, one of the holdovers from Zook’s coaching staff. Akeem Spence and Glenn Foster, two disruptive forces along the line of scrimmage, should fare well in that department. Taken as a whole, the defensive line is arguably the Big Ten’s best. With Buchanan and Staples rushing the passer and Spence and Foster collapsing the pocket, the Illini will force hasty and ill-fated decisions from opposing quarterbacks. And for the third straight season, Illinois could produce another first-round draft pick at DE.

With so much talent and depth along the line, it’s tough for any unit to match its overall strength, but the linebacking corps boasts arguably the team’s most valuable defensive player in MLB Jonathan Brown. A consensus preseason All-conference pick, Brown amassed a team-leading 108 tackles in 12 games (he was suspended for the team’s game at Indiana after kneeing NU offensive lineman Patrick Ward in the groin) and looks primed to increase that number this season. The outside linebacker spots lack the same starpower, though senior Ashante Williams and sophomore Houston Bates are both coming off strong performances in the spring and should operate smoothly around the dynamic Brown. The linebackers are a speedy, rangy group who can make plays from sideline to sideline and provide support both in the running and passing games. The secondary brings back everyone from a group that ranked 1st among Big Ten teams in pass defense with an average of 162.3 yards allowed through the air. Competition has ruffled the expected rotation, with sophomore Earnest Thomas likely to claim a starting safety spot alongside senior Supo Sanni. The cornerback situation is settled thanks to Hawthorne and senior Justin Green. The front seven is the strong suit of this Illini defense, yet its but one formidable component of a powerful defensive unit that should once again rank among the league’s best.

For a team transitioning to a new offensive system, strong defense can lighten the load on Scheelhaase and co. as they adapt to the new schemes and philosophy. The offense could click right away, or Scheelhaase’s accuracy problems could persist into the season and points could be sparse in an unfamiliar system. Either way, the Illini will have stingy defense as a benchmark for any successful performance this season. With Buchanan rushing the passer, Brown controlling the middle of the field and Hawthorne locking down opposing receivers, there are three well-stocked lines of defense poised to stymie the various offensive attacks inhabiting the Big Ten.