Take Two: Which Receiver will be the most productive this season?

Share All sharing options for: Take Two: Which Receiver will be the most productive this season?

Every Friday, Inside NU will do a “Take Two,” giving you our opinions on a major topic surrounding Northwestern or college sports in general. Today, we take our best shots at predicting the Wildcats’ most impactful newcomer on the hardwood. Click here, for last week’s edition, where we make a case for the strongest football position group heading into the upcoming season.

Receiver productivity is a vague concept. The term gets thrown around pretty casually, but there’s no hard-fast criteria to define what constitutes a productive receiver. The obvious answer is statistics: if you score a bunch of touchdowns and accumulate a bunch of passing yards, that’s certainly counts as good production—the tangible, quantifiable kind. There’s also something to be said for players who contribute in ways not seen on the box score. Some receivers are revered for their blocking, leadership and ability to draw attention away from other receivers. Surely, these are productive attributes. There is a range of possibilities, some of them easier to grasp than others.

With word leaking earlier this weak that Kyle Prater will indeed play this season, the Northwestern receiving corps can enter camp without a huge question mark hanging over the eligibility of its newest addition. We now know everyone that will suit up for the Wildcats at receiver this season, and so we thought it pertinent to apply our super-murky criteria, productivity, to this year’s group of wide outs. Again, this doesn’t necessarily reflect who we believe is the best receiver, or the one with the greatest projected statistical output. Productivity is a catch-all descriptor encompassing a wide spectrum of possibilities.

So, take this how you will; which is to say, take it as nothing more than the opinions of two football-obsessed sports writers looking for something to pass the time on a Friday morning. 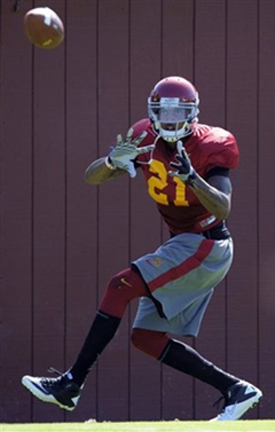 While there will be some early growing pains, Prater should be highly productive within the confines of McCall's pass-oriented spread attack (Photo courtesy Mark J. Terrill/AP Photo).

My first thought was that Prater, talented as he may be, isn’t quite ready to step in as the team’s No. 1 receiver, thus eliminating him from the productive conversation in a pure statistical sense. Even a player with his decorated background needs at least a year to settle in to a new program, learn the offense and develop a rapport with his teammates before contributing in any significant way. But Prater appears to have acquitted himself nicely with his teammates, particularly quarterback Kain Colter, his roommate. Colter and Prater connected on several occasions during spring practice, and it appears that bond has transcended the gridiron. After a summer working out together, they should be better prepared for the upcoming season.

From a sheer talent perspective, Prater has no equal—not on this team and perhaps not in the Big Ten. He provides superb straight-line speed and quickness to go along with uncanny jump ball ability and sticky hands, all packaged tidily within a 6-5, 215 frame. It’s not often you see receivers with this type of skill set and athleticism to go along with freakish strength and size. He can make plays on short and deep routes, running over the middle and on the perimeter—really, Prater can do it all. For Colter, whose throwing accuracy remains in serious doubt heading into this season, Prater’s length provides a huge target he can rely on in critical situations. Perhaps his biggest asset will be the ability to make plays in the end zone. Offensive coordinator Mick McCall can use Prater’s height advantage on fade routes and jump balls. For opposing cornerbacks, thwarting Prater in the end zone will prove extremely difficult, particularly if Colter can improve his timing and ball placement.

It requires no large stretch of the imagination to think Prater will score double-digit touchdowns and compile more than 1,000 receiving yards. Plenty could go wrong, of course, and he may not hit those lofty marks, though it’s certainly a distinct possibility. But even if Prater fails to hit those milestones, he can still be the Wildcats’ most productive receiver. For one, Prater is an active blocker. As he continues to learn the offense, he can open up running room for receivers downfield by clearing out defenders. More importantly, his physically imposing presence demands attention from opposing defenders. Whenever he’s on the field, running routes, blocking or otherwise, Prater simply can’t be ignored. It’s highly unlikely he will face a defender with the athleticism or physicality to match him one-on-one, meaning Prater will see plenty of double teams and bracket coverage. With one, two, even three defenders eying Prater, there’s space to be had for NU’s other receivers and clear passing lanes for Colter to pinpoint.

So even if Prater doesn’t score the most touchdowns or record the most yards, his overall productivity will exceed all others. This is only his first year in a new offense, so Prater may need some time to gel with the players around him before he takes that leading role his talent, skill set and size warrants. After a disappointing two-year stint at USC, Prater is primed for a breakout year in his first season with the Wildcats. He was never given the opportunity he deserved with the Trojans, but NU’s pass-heavy offense provides the ideal platform to flaunt his awe-inspiring talent. 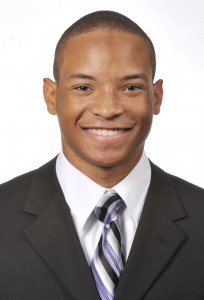 Tony Jones may be NU's most productive receiver now that he's back from injury.

I'll start with the obvious here — yes, Kyle Prater is the most talented receiver Northwestern has and, yes, he could very well be NU's leading receiver this season. However, for argument's sake, I have to go with someone different. For that reason, I'm going with Tony Jones.

To the casual Northwestern fan, Tony Jones is hardly a big name. After sitting out all of last season due to injury, he's been overshadowed by some other NU receivers, namely Christian Jones and Demetrius Fields, and even, to an extent, Rashad Lawrence. However, before redshirting last season, Jones was coming off a promising freshman campaign in which he had 11 catches for 157 yards for a touchdown. Those numbers aren't great, but they're impressive for a true freshman and Jones seemed poised to breakout in 2012. Now, one year later, he's ready for that breakout season.

While Prater is the best all-around athlete on the team — his 6-5, 215-pound frame overshadows Jones at 6-0, 185-pounds — Jones, according to Kain Colter, is one of the fastest players on the team. That ability to create space will help a young quarterback like Colter tremendously, allowing him to make easier throws and taking the play out of traffic. Of course there will be a little bit of adjusting back to game speed, but Jones has been back to 100 percent for a while and should be okay in the early-going. His confidence is certainly back — for him and his teammates.

"I’m trying to be modest, but I think that this wide receiver unit has the ability to be the best in the Big Ten, best in the country,” he in the spring. “We definitely have a lot of workers on this offense, so we have a lot of guys to be excited about.”

Talking with some NU bloggers the other day, we noted that it was interesting that NU had so many good receivers despite their receivers typically having low production in comparison to other top receivers. The Wildcats don't throw the ball nearly as much as most teams, so neither Jones nor Prater will lead the league in receiving yardage. However, they give NU two outstanding options to throw to in obvious passing situations, and the duo both of those guys will form is a luxury NU hasn't had in a long time. Despite what the numbers will likely say, this could be the best receiving duo in the Big Ten in that Prater and Jones will be the most reliable pair of receivers in the conference in obvious passing situations. And while Prater is certainly the preseason favorite to be NU's top receiver, don't sleep on Jones, who is poised for a breakout year, just one year later than he would have liked.