In most years, If you compare preseason polls to postseason rankings, the differences, by and large, are substantial. Because voters have a limited base of information to draw from—they haven’t seen of these teams actually, you know, play—the rankings are often inaccurate or completely off-base. The coaches poll, released yesterday, counts towards determining participants in BCS bowl games as well as the national championship. It’s a fraudulent process. Not only do the coaches more often than not defer to sports information directors to fill out their ballots, they have a vested interest in propping up their teams while demeaning other teams vying to supplant them in the BCS standings. The Harris Poll, another component of the perplexing BCS formula, is voted on by Harris Interactive, a market research company, and includes a 115-member panel of coaches, players, current and former media. Many of these voters don’t even watch enough games to make informed decisions about choosing the right teams, let alone ordering them in a way that accurately reflects their respective statures in the national title race. Both systems have glaring flaws, and yet both will continue to help determine college football’s champion for the next three seasons.

Far less relevant are preseason player and team rankings released by various media companies. Beyond the fact that they’re almost always unreliable or incomplete—media hype and national brand-name recognition typically carries greater importance than actual projected performance—these previews and rankings are harmless creations designed to satisfy football-hungry fans in the lead up to the fall season. Yesterday, Athlon Sports released its top 50 Big Ten players for 2012. Five main criteria were used to compile the list: 1) Projection on 2012 performance 2) Importance to team 3) Positional importance 4) NFL draft stock 5) Career performance. The teams with the most players included were Michigan State (9), Ohio State (8) and Nebraska (8). Northwestern was left off the list altogether. Even Minnesota made the cut, with quarterback Marqueis Gray ranking 48th.

The immediate response is mild disbelief. It seems at least one NU player belongs in the league top-50. But when you survey the list and compare it to the top players on NU’s roster, the omission makes decent sense, all things considered. The Wildcats have a collection of very good players, many of them young, inexperienced but teeming with upside. Most of the players on the list have well-established track records of success. So while it’s a bit of a surprise that NU is not represented, the Wildcats simply don’t have a brand-name superstar on their roster this year, a well-known player demanding league-wide attention that’s a sure-fire lock in these rankings. This list may anger some Wildcats fans, and so for the sake of alleviating those hot tempers, I figured I’d take a stab at selecting three NU players who, under the criteria used for Athlon’s list, might have qualified. I’m not saying these players necessarily deserve a spot, but each has a strong case. 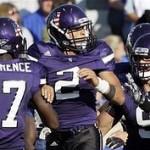 Criterium No. 1, “projection on 2012 performance”, looms largest for Colter. Last season, he played and thrived at nearly every offensive position while sitting behind Dan Persa. Colter’s athleticism and playmaking ability provided a versatile force for an offense that ranked second in the Big Ten in total offense last season and he finished just 34 receiving yards short of notching 500 or more rushing, passing and receiving yards. As Persa struggled throughout the season with a nagging achilles injury, Colter seized his opportunity at quarterback. He thrived within the confines of Mick McCall’s spread offense, most notably against Nebraska, where Colter conducted a masterful three-touchdown, second-half performance against the Huskers.

If he can carry that performance into this season and replicate it with some measure of consistency, it won’t be long before Colter establishes himself as one of the league’s best QBs. At a time when dual-threat quarterbacks and spread offenses are the Big Ten’s strategic flavor of the week, Colter must distinguish himself among a group of similar signal-callers, including Denard Robinson (Michigan), Gray (Minnesota), Braxton Miller (Ohio State), Tre Roberson (Indiana), Taylor Martinez (Nebraska) and Nathan Scheelhaase (Illinois). He should fare well in an offense tailor-made for his unique skill set, not to mention a receiving corps, highlighted by USC transfer Kyle Prater, that is widely considered the league’s all-around best group. If he can improve his throwing accuracy and maximize his versatility and athleticism, Colter has the chance to be better than Persa, Mike Kafka or any NU quarterback to take the reins of the unique spread attack implemented by Randy Walker in 2000. 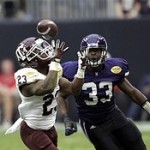 Given the linebackers on this list—Chris Borland, No. 9 (Wisconsin); Gerald Hodges, No. 10 (Penn State); Mike Taylor, No. 11 (Wisconsin); Max Bullough, No. 17 (Michigan State); Jonathan Brown, No. 19 (Illinois); Denicos Allen, No. 27 (Michigan State); James Morris, No. 38 (Iowa); Will Compton, No. 43 (Nebraska)—it’s tough to make a convincing case for Nwabuisi. While he emerged as arguably NU’s most indispensable defensive player midway through last season, he doesn’t have the same reputation or proven track record as the other linebackers on the list. Last season was Nwabuisi’s first as a full-time starter, so any viable argument would essentially rule out criterium No. 5, career performance.

Yet criteria 1-3—Projection on 2012 performance, Importance to team and Positional importance—weigh strongly in Nwabuisi’s favor. After submitting an impressive 84-tackle season in 2011, the Wildcats’ senior leader will increase his productivity. Nwabuisi used the offseason to improve his game and assume a greater leadership role. During spring practice, he was flying around the field, making plays at the line of scrimmage and helping out in pass coverage. He enters this season with an abundance of confidence after finishing last year on a strong note. The Wildcats boast arguably the best group of linebackers since Pat Fitzgerald inherited the head-coaching job in 2006. Nwabuisi, Damien Proby, Colin Ellis and Chi Chi Ariguzo are rangy, dynamic playmakers that make plays sideline-to-sideline. Nwabuisi personifies this group and he will need to inspire greater play throughout the defense by affecting its cohesion and unity in a positive and productive way. The defense, which has weaknesses along the defensive line and in the secondary, needs Nwabuisi to marshal the troops and command respect in the huddle as a vocal leader while continuing the positive momentum he built towards the end of last season. If he can improve his range and tackling while leading the linebacking corps to a strong season, Campbell could vault into the upper-tier of Big Ten LBs.

Out of the three players on this list, Campbell has the most impressive one-year sample size of performance backing his case. As a redshirt freshman, he won a starting safety job alongside Brian Peters in preseason camp, then proceeded to lead the Wildcats in tackles last season with 100. Campbell made major strides throughout the season and played his best football against Michigan State and Texas A & M, the final two contests of 2011. While he struggled to grasp certain defensive concepts early in the season, by season’s end he morphed into a skilled playmaker and a force at the line of scrimmage. During spring practice, Campbell was keeping his teammates in line, providing vocal encouragement and critiques and overall serving as a constructive force for the defensive backs.

Strange as it may seem, he is the most experienced player in NU’s secondary this season. While Stanford transfer Quinn Evans played sparingly in two seasons with the Cardinal and potential safety partners Davion Fleming, Jared Carpenter and Hunter Bates are older from a maturity standpoint, Campbell is alone in winning and maintaining a starting spot for a full season. With just one year of starterdom under his belt, Campbell hardly boasts the ideal profile for the player expected to lead an inexperienced and talent-bereft pass defense to improved levels of performance over last year’s debacle (The Wildcats ranked last among Big Ten teams in giving up an average of 230.4 yards through the air). None of the safeties on the list carry the same positional importance as Campbell. The secondary will struggle mightily—perhaps more so than last season—if Campbell cannot elevate his individual game to an All-Conference level while gelling the talent around him into a unified pass defense front.