To get you ready for each of Northwestern’s opponents, we’re singling out players to watch on both sides of the ball, one major strength, one glaring weakness and one under the radar player to keep an eye on. For some statistical insight, we'll also provide context with some basic numbers and facts. This week we look at Syracuse. 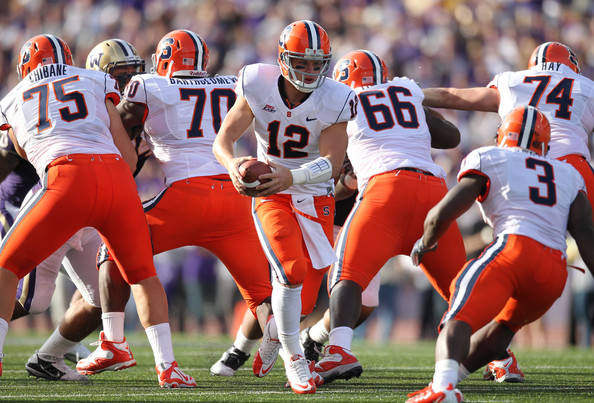 One year after setting the Syracuse single-season record for completions (259) and passing yards (2,685), Nassib enters his final season with the chance to lead a potent passing attack and break more school records in the process. His steady progression has barely registered at the national level, but Big East defensive coordinators know him quite well. For the first time Nassib has multiple dangerous pass-catchers to work with. The Orange bring back two explosive receivers, seniors Alec Lemon and Marcus Sales, along with utility backfield threat Ashton Bryold, who could line up at wide receiver, running back or wildcat quarterback. If Nassib can harness those explosive talents on the outside, and the offensive line provides ample protection, he could end the season atop the Big East passing ranks. Anything short of a 3,000 passing yard season will stand as at least a minor disappointment. Nassib has the weapons in place to maximize his talents. If all goes well, the Orange – with Nassib running the show – could field one of the league’s best passing attacks

After weighing an early jump to the NFL draft, Thomas decided to return for his senior season and finish his Orange career on a strong note. He started 17 games over the last three seasons and has been a fixture in the Orange’s run and pass defense efforts. Last season, Thomas finished third on the team with 67 tackles in 10 games (he missed two games with an injury). The undisputed leader of the Orange’s secondary, Thomas will be charged with leading a resurgence in the defensive backfield, which last year ranked sixth (258.2 yards per game) in the Big East against the pass. After losing free safety Philip Thomas, who intercepted six passes in 2011, Thomas has to inherit those ballhawking instincts and make plays in both the defensive backfield and in the run game, all while improving the players around him.

With a bevy of talented receivers, a quarterback with two-years of starting experience and a talented offensive line (when healthy), the Orange are well-suited to light it up through the air. From a passing standpoint, Nassib may be the Big East’s best quarterback and he has more than enough firepower to prove as much this season. Sales was suspended in 2011 on drug charges, but provides a true deep threat with great size at 6-3, 183 pounds. Lemon set a single-season school record with 68 receptions last fall. He sat out spring practice with a shoulder injury but will be ready in time for Saturday. Other receivers to keep an eye on are juniors Jarred West and Becket Wales, two reliable targets competing for playing time behind Sales and Lemon. Then there’s Bryold, who can contribute in several different capacities. Anyway you look at it, this passing attack threatens to put up big numbers this season. Nassib is an accurate passer with a strong arm; Lemon, Sales, Bryold and whoever else steps up will benefit accordingly.

Besides Thomas, there are several question marks in the Orange’s secondary. Senior Ri’Shard Anderson is the projected starter at one cornerback spot, while sophomore Brandon Reddish has taken the lead on the other side. Reddish was one of only 10 true freshman to play in 2011 – he finished with six tackles in 12 games – while Anderson started six games and registered 22 tackles. Neither player was particularly impressive last season, and if they can’t fix their mistakes, the secondary could struggle much in the same way it did last season. Replacing Philip Thomas at free safety is junior Jeremi Wilkes, a big-hitting DB who started five games last season. He doesn’t bring the same playmaking ability as Thomas, but could slide in nicely alongside Shamarko Thomas. The secondary has plenty of talent; it’s just that most of that talent hasn’t translated into a functional and cohesive pass-defense unit. Thomas is the only proven commodity – and a possible mid-round pick in next year’s draft. His partners in the secondary haven’t proved they can match his intensity and performance.

Under the Radar: RB Prince Tyson-Gulley

After losing Antwon Bailey, who rushed for 1,051 while being named to the All Big East first team, to graduation, the Orange entered training camp with an open competition at tailback. Junior Jerome Smith is listed atop the depth chart, but coordinator Nathaniel Hackett is expected to employ several backs based on specific situations. Tyson-Gulley played in only four games in 2011 before a broken collarbone sidelined him for the rest of the season. But his limited action was promising: Tyson-Gulley averaged 4.9 yards per carry on 18 attempts, including an impressive 10-carry, 66-yard performance in an overtime win against Toledo. He was fourth in the Big East in kickoff returns as a freshman in 2010 with an average of 21.8 yards per runback. Now fully recovered from his injury, Tyson-Gulley returned to practice this offseason with the same explosion and elusiveness he flashed before his injury. Hackett added some new wrinkles to the run game to maximize the talent on hand. Tyson-Gulley will get a decent share of the available carries; with his speed and big-play ability, don’t be surprised if Tyson-Gulley breaks a long-run or takes a slip screen for big yardage.