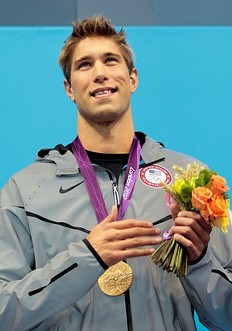 Grevers, swimming the backstroke quartile of the men’s 4 x 100 medley relay, paced the Red, White and Blue with a 53.04 first leg, touching the wall with a 0.34 second advantage on second place France. Next up was Brendan Hansen, who gave up the lead with his breaststroke swim, and sent Phelps into the water trailing the Japanese by 0.21 seconds. In typical Phelpsian fashion, the 18-time Olympic gold medal winner delivered a max-effort butterfly tour de force, his signature violent splash cresting the pool length with a motor boat rippling effect. When he reached the wall, the Americans had regained a 0.26-second lead. Nathan Adrian took that slight advantage and, ahem, swam with it, clearing the Japanese by a whopping 1.63 seconds.

This will be remembered as Phelphs’ swan song, the last time the most decorated athlete in Olympic history performed—and boy did he perform—in his natural element. Yet it all began with Grevers and his backstroke leg that propelled the Americans to yet another poolside triumph in these games. In total, Team USA won 30 medals in swim competition, including 16 golds. Grevers accounted for 1/3 of that total with two golds and a silver. At 27, this very well could be Grevers’ last foray in Olympic competition. With three medals in London and two in the 2008 Beijing games, Grevers ends his career not quite in the same rarefied air as the 22-time medal winning Phelps, but with six total medals and a delighted group of NU students, fans and alumni singing his praises. Team USA’s triumph in the pool at these Olympics reinforced its unparalleled dominance in the sport and Grevers goes home knowing his efforts played a crucial role in its transcendent performance.