Share All sharing options for: Preseason Camp Primer Part 3: 5 True Freshmen Who Could Play this Season

Yesterday we kicked off our preseason primer with 5 burning questions and 5 key players to watch. The third installment of our camp preview will focus on 5 incoming freshmen that could make an impact this season. Northwestern’s 2012 recruiting class counts 21 players, only a small fraction of whom will see the field this season. Based on talking to different scouts, coaches and watching tape, these are the five guys I believe have the best shot at foregoing the customary redshirt and playing right away.

*All star ratings based on Scout.Com’s rating system 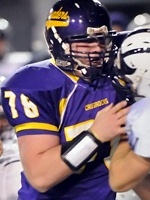 The offensive line lacks depth on the interior. Three projected starters—left guard Brian Mulroe, center Brandon Vitabile and right guard Jack Konopka—will provide consistent run and pass blocking, but there’s not much proven talent in the reserve ranks. Which is where DePietro—whose Scout. Com profile describes in glowing terms: “he may be the most fundamentally sound lineman in the state”—comes into play. (http://recruiting.scout.com/a.z?s=73&p=8&c=1&nid=5276833). If that description holds even a small degree of truth, DePietro should be able to step in and infuse the line with a dose of young talent. He may even challenge Konopka and Neal Deiters for the starting right guard spot. A strong preseason camp will force coach Pat Fitzgerald’s hand. If DePietro outshines his competition, Fitzgerald has no choice but to play him. If he plays well, but doesn’t win a starting spot, then is it worth wasting a year of eligibility for a backup role?

Players who redshirt normally need a season to learn a new system, mature physically and adjust to a new and more difficult level of competition. Far as I can tell, DePietro is as technically sound as most every interior lineman in his class. He’s a bit undersized at 6-5, 270 pounds, but DePietro has the physical tools for the college game and appears ready for the big stage this season. The line could use a talented youngster like DePietro, who could fill in nicely alongside Vitabile to form a promising interior duo upon which to build around in the coming years. One of the main reasons he was such a highly-sought after prospect coming out of Lancaster Catholic (PA) high school is his advanced understanding of his position and his high level of preparedness for the college game. DePietro’s transition into Big Ten football will be easier than most. There isn’t a reasonable argument for redshirting such a refined talent when he will help the team this season. 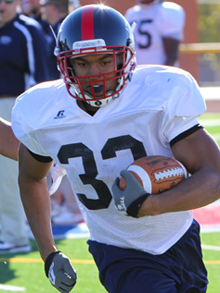 The earliest pledge of 2012, Jones gave his verbal commitment in October 2010 after seeing Northwestern nearly topple then undefeated Michigan State at Ryan Field. He boasts great speed and explosiveness, pummels defenders in short yardage situations and makes catches out of the backfield. At 6-0, 215, Jones is a big, strong back, with plenty of room to add more bulk. He’s a savvy inside runner, with a keen sense of when to cut inside and when to bounce around the edge. Jones is a dynamic backfield force with elite athleticism, all packaged within a stout frame well-suited for the college game. I can see Jones becoming the every-down back later in his career. It’s highly unlikely he makes that leap this season, but he can be an influential backfield presence nonetheless.

The running back prognosis is bleak, what with Treyvon Green and Mike Trumpy claiming the lions share of the running workload. While Green looked promising in certain situations last season, particularly in consecutive games at Indiana and Nebraska, it remains to be seen how he will adjust to a more prominent role. There are always questions about Trumpy’s health, and while he can be an effective back in short-yardage situations, he’s entering preseason camp recovering from a severe injury for the second straight year. Trumpy, a power back, complements the speedy Green to form a nice change of pace, one-two punch. Yet if either player struggles or gets injured, the running game will be mostly ineffective. Neither player has the makeup of a complete, every-down back. Jones offers an intriguing mix of both styles—a power back with elite speed and agility, as quick to scamper down field as he is to run over a defensive linemen for a first down. His toughness, crafty inside running and overall well-grounded understanding of the position will help establish a balanced offensive attack. Jones won’t be charged with carrying the run game. Instead he’ll share carries with Trumpy (if healthy) and Green. It’s a perfect transitional initiation into major college football for Jones: low expectations, low-risk, potentially high-reward. 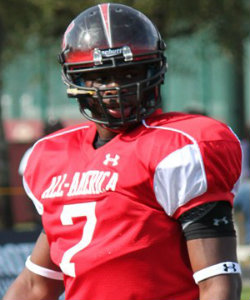 Landing Odenigbo was easily the most impressive recruiting coup of Fitzgerald’s coaching tenure. The 6-4, 220-pound outside linebacker chose Northwestern over Stanford and Notre Dame. While he’s viewed as a pass-rushing defensive end, his size may necessitate a switch to outside linebacker. Whichever position he chooses, Odenigbo needs to add at least 15-20 pounds of muscle mass. He anchored Centerville high school’s 4 x 200 relay team in the spring, which precluded the sort of vigorous weight training program Odenigbo needs to add weight. From a sheer talent perspective, however, he is one of the most complete pass rushers in his class—a wily, energetic force off the edge. And despite his lean frame, Odenigbo powers his way through and around offensive linemen, efficiently staying low and using his leverage to drive back the opposition. He explodes off the snap and uses host of wildly different pass-rushing moves, from 360-degree spins to arm rip techniques and bull rushes. What’s more, Odenigbo relentlessly pursues ballcarriers if they break through the line of scrimmage. He is a tireless worker with immense talent and physical ability.

There’s no doubting Odenigbo’s raw talent and huge upside, not to mention the fact that he could have a huge impact this season. The more pertinent question is where he fits in. The linebacking core is, by all accounts, set in stone, with Damien Proby, David Nwabuisi, Colin Ellis and Chi Chi Ariguzo forming a dynamic and well-rounded group. Quentin Williams and Tyler Scott are the projected starters at defensive end, and redshirt freshman Deonte Gibson, a speedy sparkplug off the edge, will get ample opportunity to rush the passer on obvious passing downs. If Odenigbo suits up this season, given his size, it’s likely he plays outside linebacker. Yet he probably wouldn’t beat out Ariguzo or Nwabuisi for a starting spot this season. So while Odenigbo promises to be an active force at linebacker or end, playing him in a reserve role this season may be a grand waste of one years’ eligibility. When you bring in a player as talented and unique as Odenigbo, maximization of talent and playing time is the most logical approach. In other words, it makes more sense to have Odenigbo start for four seasons rather than play him as a backup this season, thus squandering one years’ Odenigbo eligibility on limited snaps in a reserve role. Odenigbo could very well win a starting spot in preseason camp, perhaps nudging out Ariguzo at OLB. Though if he can’t play his way atop the depth chart and he’s not ready physically for the rigors of Big Ten football, then a redshirt year is the safest and altogether best option. 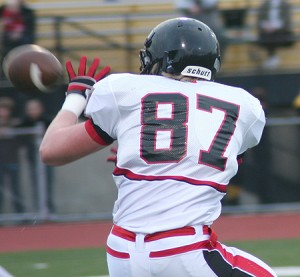 Superback is a unique position requiring a versatile athlete proficient in blocking and pass-catching. These two fundamental areas of performance are crucial for any player willing to line up at the position, and for the past three seasons Drake Dunsmore commanded those responsibilities with aplomb, setting the bar extremely high for his successor. Heading into preseason camp, it remains unclear who that player will be. Tim Riley, a converted linebacker, has the slight edge after an impressive performance in the Meineke Car Care Bowl in which he caught a two-yard touchdown pass in the fourth quarter. Former quarterback Evan Watkins will also challenge from the starting job, with redshirt freshmen Mark Szott and Doug Diedrick also posing viable claims to the position. All of which points to a rather underwhelming batch of players trying to piece together a worthy collective season to atone for Dunsmore’s loss. Nobody has a strong enough track record at the position to demand a large workload, much less claim the starting job outright.

With all that uncertainty, even a true freshman, like Schwaba, can compete for the starting job. He played defensive end and tight end at Upper Saint Clair high school, but was recruited as an h-back/blocking tight end. Schwaba takes the lessons learned from playing defensive end—generating leverage, working below pad level, driving back defenders—and incorporates them into his blocking. He has a strong motor and meets defenders at the point of attack without giving up any ground. As a pass catcher, Schwaba flashes good hands in traffic and can pickup yards after the catch. He still needs to add some bulk to his 6-4, 225-pound frame, but Schwaba has the makings of an effective Dunsmore heir apparent. Then again, Schwaba will need at least a year before he reaches his physical peak, so for now it may be best to hold off on the Dunsmore comparisons. If Schwaba decidedly outperforms his competition in preseason camp, he could be the week 1 starter. A better guess is that Fitzgerald will deploy Schwaba in a limited role early on, then gradually increase his playing time later in the season as he adjusts to his unique position. Fellow true freshman Dan Vitale could also cut into the superback playing time pie this season, though Schwaba is better prepared to play in year one. 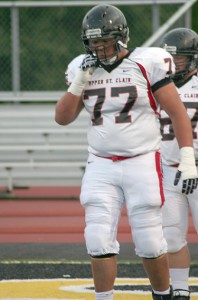 Fitzgerald plucked another 2012 class member from Upper Saint Clair in Park, a skilled interior lineman who chose Northwestern over West Virginia, Vanderbilt, Pittsburgh, Cincinnati and a host of other BCS programs. Park, DePietro and Vitabile provide a strong foundation upon which to build a strong line. DePietro, who bonded with Park over their shared recruitment trajectory, is better positioned to make a run at significant playing time this season. Yet Park is also prepared to take on a major reserve role, provided he outperforms Konopka and Deiters. He provides a reliable option behind Mulroe at left guard, but can also play the right side as well as center.

From a physical standpoint, Park is primed to make an impact this season. His 6-4, 295-pound frame comes well-equipped to counter the likes of Jordan Hill (Penn State) and Jonathan Hankins (Ohio State). Park is strong and aggressive in thwarting defensive tackles, an athletic presence in the trenches. Yet he may need some time to refine his skills before rightfully claiming a prominent role along the line. He flashes good initial punch, and rarely yields ground when engaging defenders one-on-one. Park excels when asked to trap and pull, and gets into the second level with tenacity and purpose. He could be a starter within the next two or three years. This season, his playing time would be limited, unless he vastly outperforms expectations in training camp and throughout the season. Using Park this season, tempting as it may be, may prove imprudent, particularly if he’s used as a mere insurance option. Park is a potential starter down the road, so the wiser approach involves a redshirt year. An extraordinary performance in preseason camp could change that, and Fitzgerald may have a difficult decision to make—to redshirt? Or not?—if Park outperforms his competition.