Share All sharing options for: This Season Offers a New Opportunity for Stanford Transfer Quinn Evans 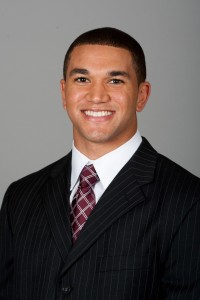 Excited to be healthy, excited for a fresh start, excited for a chance to be back on the field. Because that road back to the field has been a long one for Northwestern’s newest cornerback.

“It feels great,” he said. “I haven’t played in so long. It’s really exciting. Everything is fresh and kind of brand new so I’ve really been enjoying my time out here.

Evans’ road to this point has been frustrating. He went to Stanford for four years, redshirting his freshman year there, and playing in eight games in 2009 with one start. He played in 12 games as a backup cornerback and special teams contributor in 2010. Then, as a junior, he was forced to sit out all year due to injury.

That led him to pursue transfer options to find an opportunity to get back on the field, and he found one in Pat Fitzgerald and Northwestern. Why NU?

“It’s pretty obvious; it’s a great academic school and obviously has great athletics, so it was a very easy choice,” Evans said, adding that academics played a major role in his decision to attend Stanford originally. “I certainly wanted to go to a school that could offer me the best of both worlds. So that’s why coming here to Northwestern was a no-brainer.”

Fitzgerald originally recruited Evans to come to NU out of high school. They reconnected this year and this time, Fitzgerald was able to seal the deal.

“I’m ecstatic for Quinn to be able to be out playing football again,” Fitzgerald said. “It’s been great to see him for a couple days. He can really run and he’s just learning the system and hopefully as we continue to evolve and add some things that he can continue to have some fun, enjoy the game and execute.”

“When you have the pads taken away and you get a second opportunity to get back there out on the field and compete, that’s a special thing,” he said. “You really start to cherish what you have.”

What he has now is the chance to be a starting cornerback in the Big Ten — a chance to end a frustrating career at Stanford on a high note at Northwestern. While Evans is still new to NU, he has as much overall playing experience as any corner on the roster. In fact, the most experienced player in the secondary is safety Ibraheim Campbell, a sophomore who started last year as a redshirt freshman. That’s put Evans in a unique situation.

“He’s a veteran from experiences at college, but he’s also learning a whole new language and a whole new defense here,” Fitzgerald said.

Even though Evans is in the same position as a lot of the freshmen, trying to learn the defense, his experience in college football as makes him a veteran, so he has also tried to help mentor the younger players.

“When you play college football for four years you get some time underneath your belt, some experiences, so I take every opportunity to try to help out some of the younger guys,” he said.

With such a young secondary there will be a lot of mentoring for Evans to do, especially after last year’s disappointment — he laughed and said he’s heard about the struggles from last season a little bit. However, Evans sees a talented group to work with despite the youth, and he is holding himself and the entire unit to lofty expectations this season.

“I think everyone goes into the season hoping for a national championship, so I was really excited to come out here and see what great athletes there were,” he said. “I think we definitely have the talent to be a great football team, so that was the most exciting thing for me to see. So I think this team has a real special opportunity to do something great.”