Leading up to the upcoming football season, Inside Northwestern will give you a brief profile of each of Northwestern’s opponents. During the season, you can expect a more in-depth preview of each game, including key matchups and more specific player analysis. This is simply a refresher for eager fans looking ahead to the fall. Look for this feature every Thursday. This week, we look at Nebraska. Click here for last week’s edition. 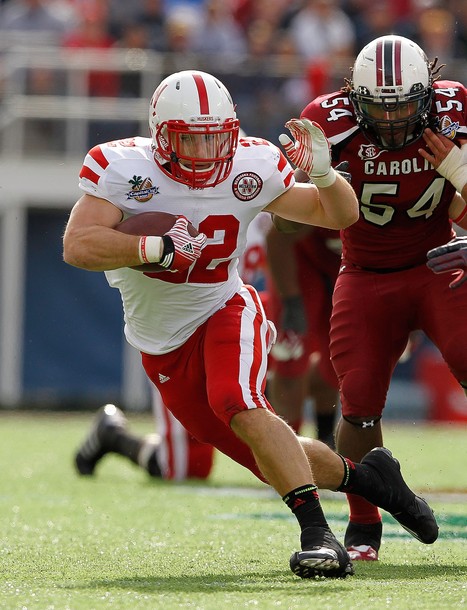 It wasn’t so long ago that the Big 12, home to some of the nation’s most storied programs, teetered on implosion, with Texas A & M, Texas Tech, Oklahoma State, Colorado, Texas and Oklahoma threatening to bolt for the west coast and morph the Pac 12 into a 16-team super league. Nebraska accepted an offer to join the Big Ten in favor of the instable and near defunct Big 12. The conference survived and appears to have garnered at least some measure of long-term stability—it has now reclaimed its spot near the top of the FBS power conference power structure, having positioned itself nicely in the new playoff structure beginning in 2014, not to mention a bowl partnership with the SEC. Still, Nebraska made an altogether wise move joining the Big Ten. Between its rabid fan base, its physical brand of play and geographic location, the  Huskers seem a better fit in their new conference—culturally, competitively and otherwise. They entered the Big Ten last season after reaching consecutive Big 12 championship games. In 2009, with star defensive tackle Ndamukong Suh leading the way, Nebraska nearly upset undefeated Texas, but eventually lost 13-12 on a last second field goal. The next season, after beating Colorado in the final game of the regular season to clinch the Big 12 North title, Nebraska held a 17-0 second quarter lead over Oklahoma, only to squander that advantage with four turnovers en route to a 23-20 defeat.

Despite ending their Big 12 membership on a sour note, having failed to win a conference championship but come excruciatingly close in consecutive seasons, Nebraska entered its inaugural Big Ten season with high hopes. The Huskers were ranked 16th in the preseason AP Poll, and they made good on those lofty projections by winning their first four games, including a week 3 shootout against Washington at Memorial Stadium, where the two teams combined for 89 points. Nebraska got a painful wake-up call in its first Big Ten game, a 48-17 thrashing at Wisconsin. It won its next three games, even dispatching then-No. 11 Michigan State with relative ease (24-3). The Huskers followed that impressive performance with a letdown against Northwestern at home, but recovered to win two of their final three league games, at Penn State and against Iowa, the one loss a 45-17 drubbing at Michigan. Nebraska faced a stiff challenge in South Carolina for the Capitol One Bowl, and their lackluster performance provided more fodder for SEC warhawks endorsing their conference’s superior standing.

While Nebraska might have underperformed last season, finishing 9-4 in your first go-round in a new league is nothing to fret over, all things considered. Now that the Huskers have a better feel for their opponents, they could take a huge leap forward into the conference elite. Whether or not they achieve that goal depends largely on the arm of third-year starting quarterback Taylor Martinez. T-Magic, as he’s affectionately known in college football parlance, was maddeningly inconsistent last season, unable to establish an identity as the Huskers’ offensive leader. He posted a decent all around season—2089 passing yards, 13 touchdowns, 8 interceptions—but never provided the consistency needed to sustain a successful offensive attack. Martinez’ struggles as a passer led to a greater reliance on tailback Rex Burkhead, the focal point of Nebraska’s potent rushing attack. He received first team All-Big Ten honors for his efforts in 2011. The defense fell well short of expectations, particularly in league play, where it gave up 27 or more points four times. Nebraska has long been known for its tenacity on that side of the ball, and coach Bo Pelini had maintained that tradition throughout his short tenure. Last season, when the Huskers ranked seventh in both scoring and total defense, the defense didn’t live up to the program’s typically stingy “blackshirt” standards. If the Huskers can recall the defensive intensity from their farewell days in the Big 12 and Martinez makes major strides, Nebraska is primed to challenge Michigan and Michigan State for a Legends Division crown.

After completing just 56.3 percent of his passes last season, Taylor Martinez spent the better part of the winter and spring working on his footwork and throwing mechanics. He drew borderline hyperbolic raves in spring practice, so he could be on track for a breakout season. Besides wide receiver Brandon Kinnie, who is now a member of the Kansas City Chiefs, Nebraska returns basically all of its best offensive skill players, including receivers Kenny Bell, Quincy Enunwa and Tim Marlowe as well as veteran tight ends Kyler Reed and Ben Cotton. If Martinez struggles again this season, it won’t be because of a lack of pass-catchers. The Huskers have plenty of firepower, now Martinez needs to make good on his offseason tune-up and deliver the ball to those players with at least some measure of consistency and accuracy.

On the offensive line, three starters from last season graduated, but there’s plenty of quality experience and depth to atone for the semi-large turnover. Junior Spencer long returns at guard and is among the leading candidates for All-Big Ten honors at his position. Senior Seung Hoon Choi has a slight edge over junior Andrew Rodriguez for the other guard spot. The tackle spots remain a bit of a mystery, with junior Jeremiah Sirles and sophomore Tyler Moore projected as starters. At center, junior Cole Pensick should step in alongside Long to form a potent interior blocking force.

One of the main issues limiting the Huskers’ offensive output was the heavily run-skewed nature of its offensive playcalling. With Martinez struggling through the air, coordinator Tim Beck relied on Burkhead, whose hard running, while undoubtedly impressive, represented far too great a share of the Huskers’ overall offensive output. By season’s end, Burkhead had worn down, his effectiveness increasingly limited by an inordinately large number of carries. Yet Burkhead remained the centerpiece of Nebraska’s offense, even if that meant lowering his carries total in favor of slip screens and other short passes. If he can recall the gritty, tireless work ethic--the lifeblood of Nebraska’s offense--that made him so effective early in 2011, Burkhead should submit another All-Conference worthy season, though it’s crucial that Beck not overuse the star running back early in the season. Increasing Martinez’ role will help establish a manageable distribution of carries for Burkhead. If the Huskers can establish a more balanced attack, they should field one of the more potent units in the Big Ten.

Last season Nebraska generated an average of 1.62 sacks per game, ranking 84th nationwide. The three seasons prior, the Huskers ranked 45th, 14th and second. It’s no coincidence that the defense—which ranked seventh among Big Ten teams in total defense (350.7 yards per game) and scoring defense (23.4 points per game)—took a considerable step back in 2011. When the D-line lost star tackle Jared Crick to a torn pectoral muscle in October, everything seemed to snowball from there. But the group returns a wealth of talent, with multi-year starters Cameron Meredith and Baker Steinkuhler, plus end Jason Ankrah, a nine-game starter last season. The line doesn’t come close to the glory days of Suh-Crick partnership, but it should return somewhat to its dominant form of recent years.

I listed Lavonte David as the team’s “key loss”. There’s good reason for this. David was not only Nebraska’s unquestioned defensive leader, but their best player, and it wasn’t even close. David led the Huskers with 133 tackles, 13 tackles for loss, 5.5 sacks, 2 interceptions, 2 forced fumbles and 2 fumble recoveries. It’s not often you see a linebacker lead his team in that wide-ranging mix of defensive categories. And that’s exactly why David was so important to this team. He was extremely versatile, his presence felt in all three levels of the defense. From the secondary to the line of scrimmage and everywhere in between, David was there, chasing down ballcarriers, recovering fumbles, wreaking havoc. All of which points to David being borderline irreplaceable. This statement is mostly true, though Will Compton has surfaced as a leader this offseason, determined to atone for David’s loss, even if he can’t hope to reprise his diverse playmaking ability. Compton will be surrounded by fifth-year starters Sean Fisher and Alonzo Whaley at linebacker.

Perhaps the most glaring vulnerability in the defense is the secondary, where the loss of Alfonzo Dennard could rival in negative impact David’s departure. With Dennard in tow, the Huskers ranked seventh in the Big Ten against the pass last season. Trying to improve in that area without such an instrumental player is a daunting task. Seniors Daimion Stafford and P.J. Smith have the edge at safety, while junior Andrew Green has locked up one cornerback spot. Contenders for the other side include juco transfer Mohammed Seisay, senior Antonio Bell and junior Stanley Jean-Baptiste.

The combined loss of David, Crick and Dennard will be extremely difficult to overcome, but the Huskers have just the right blend of leadership, young talent and coaching acumen from bright, young coordinator John Papuchis to avoid a huge dropoff. Now better-suited to deal with Big Ten offenses, if the defense can make a collective leap, the blackshirts may make an unexpected return.